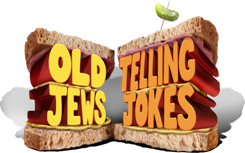 Q: Why do Jews always answer questions with questions? A:  Who’s asking?

Created by Peter Gethers and Daniel Okrent, OLD JEWS TELLING JOKES is directed by Marc Bruni (Associate Director, The Book of Mormon Chicago) and showcases five actors in a revue that pays tribute to and reinvents classic jokes of the past and present. Think you’ve heard them all before?  Not this way. The show also features comic songs — brand new and satisfyingly old – as well as tributes to some of the giants of the comedy world and to OldJewsTellingJokes.com, the website created by Sam Hoffman that inspired the show.   If you’ve ever had a mother, visited a doctor, or walked into a bar with a priest, a rabbi and a frog – OLD JEWS TELLING JOKES will sit in the dark, give you a second opinion, and ask you where you got that.

The Off Broadway production of OLD JEWS TELLING JOKES opened to rave reviews in May 2012 at the Westside Theatre where it continues to play to sold-out houses.   Casting for the Chicago production will be announced shortly.

Peter Gethers is President of Random House Studio, as well as an editor and publisher at Random House, Inc., a screenwriter, television writer and producer, novelist, and non-fiction author of the bestselling trilogy about his Scottish Fold cat Norton: The Cat Who Went to Paris, A Cat Abroad and The Cat Who’ll Live Forever. His new novel, Ask Bob, will be published in August 2013.  He, too, is a founding member of the Rotisserie Baseball League, the 1980 group that started the fantasy sports craze.

Daniel Okrent is a writer and editor, and best known for having served as the first public editor of The New York Times.  He also invented Rotisserie League Baseball, and wrote several books, including Last Call: The Rise and Fall of Prohibition, which served as a major source for the 2011 Ken Burns/Lynn Novick miniseries “Prohibition.” Most of his career has been spent as an editor, at such places as Alfred A. Knopf and TIME, Inc. His book Great Fortune: The Epic of Rockefeller Center was a finalist for The Pulitzer Prize in history.

Marc Bruni’s directing credits include Pipe Dream (Encores!), Fanny (Encores!), Ordinary Days (Roundabout),In the Mood (Berkshire Theatre Festival), 25th Annual Putnam County Spelling Bee (Paper Mill/Philadelphia Theatre Company), Irving Berlin’s White Christmas (Paper Mill), Such Good Friends (NYMF Directing Award),High Spirits (York Mufti), Glimpses of the Moon (Oak Room) and five shows for the St. Louis MUNY: The Music Man (Kevin Kline Award Nomination), Sound of Music (Kevin Kline Award Nomination), Legally Blonde, My One and Only, Seven Brides for Seven Brothers.  He has served as Associate Director on 15 Broadway shows including Nice Work If You Can Get It and the 2011 Tony™ winning revival of Anything Goes. He is the associate director for the current Chicago engagement of The Book of Mormon at the Bank of America Theater.

Richard Frankel, Tom Viertel, Steven Baruch and Marc Routh have produced and managed a wide range of productions for more than 27 years including – A Little Night Music, Hairspray, The Producers, Stomp, The Norman Conquests, Gypsy, Sweeney Todd, Company, Little Shop of Horrors, The Weir, The Sound of Music, Smokey Joe’s Café, Angels in America, Oleanna, Love Letters, Driving Miss Daisy, Frankie and Johnny in the Clair de Lune, Penn & Teller and many others. Their shows have been awarded 36 Tonys, 47 Drama Desk Awards, 38 Outer Critics Awards, 4 Grammys™, 8 Olivier Awards and 2 Pulitzer Prizes. They have the rare distinction of having won Tony Awards in all four “Best” categories – play, musical, revival of a play and revival of a musical.

OLD JEWS TELLING JOKES will be performed at the Royal George Theatre, 1641 N. Halsted Street, Chicago, September 24 – November 24, with the following schedule:  Tuesdays – Fridays at 7:30pm; Saturdays at 5 & 8pm; and Sundays at 2 & 5pm.   Starting the week of October 7, Wednesday matinees at 2pm will alternate with Tuesday evening performances.

Tickets are priced at $49 (weekdays) and $59 (Friday-Sunday). All prices do not include a $1 facility fee.  Tickets are now on sale by calling (312) 988-9000; visiting the Royal George Theatre box office, or online at Ticketmaster.com. Discounted tickets for groups of 10 or more are available by calling Group Theater Tix at 312-423-6612 or visiting www.grouptheatertix.com.