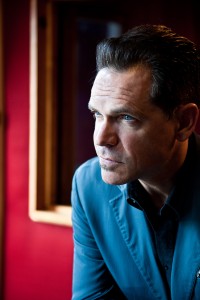 Tickets for New Year’s Eve with Kurt Elling are $75 for regular admission; VIP tickets are $125 and include premium seats to the concert and a pre-show cocktail reception at 6:30pm. Tickets are available by phone at 847.673.6300, or online at northlight.org.

“This concert will be a rare opportunity to see Kurt Elling in an intimate theatrical setting, one in which this extraordinary artist shines,” explains Executive Director Tim Evans. “He is the most dynamic jazz vocalist of our time and we are honored to present his amazing talents at Northlight.”

Grammy winner Kurt Elling is among the world’s foremost jazz vocalists. He has won every DownBeat Critics Poll for the last thirteen years and has been named “Male Singer of the Year” by the Jazz Journalists Association eight times in that same span. Every one of Elling’s ten albums has been nominated for a Grammy.

Elling was the Artist-in-Residence for the Singapore and Monterey Jazz Festivals. He has also written multi-disciplinary works for The Steppenwolf Theatre and the City of Chicago. The Obama Administration’s first state dinner featured Elling in a command performance.  He has toured vigorously throughout his career, thrilling audiences throughout the world. In that time he has led his own ensemble and has collaborated with many of the world’s finest orchestras.

Elling’s rich baritone spans four octaves and features both astonishing technical mastery and emotional depth. His repertoire includes original compositions and modern interpretations of standards, all of which are springboards for inspired improvisation, scatting, spoken word, and poetry. Elling is a renowned artist of vocalese—the writing and performing of words over recorded improvised jazz solos. The natural heir to jazz pioneers Eddie Jefferson, King Pleasure and Jon Hendricks, Elling has set his own lyrics to the improvised solos of Wayne Shorter, Keith Jarrett and Pat Metheny.

Now in its 39th season, the organization under the direction of Artistic Director BJ Jones and Executive Director Timothy J Evans has mounted nearly 200 productions, including over 40 world premieres.  Northlight has earned 151 Joseph Jefferson Award nominations and 28 Awards.  As one of the area’s premier theatre companies, Northlight is a regional magnet for critical and professional acclaim, as well as talent of the highest quality.