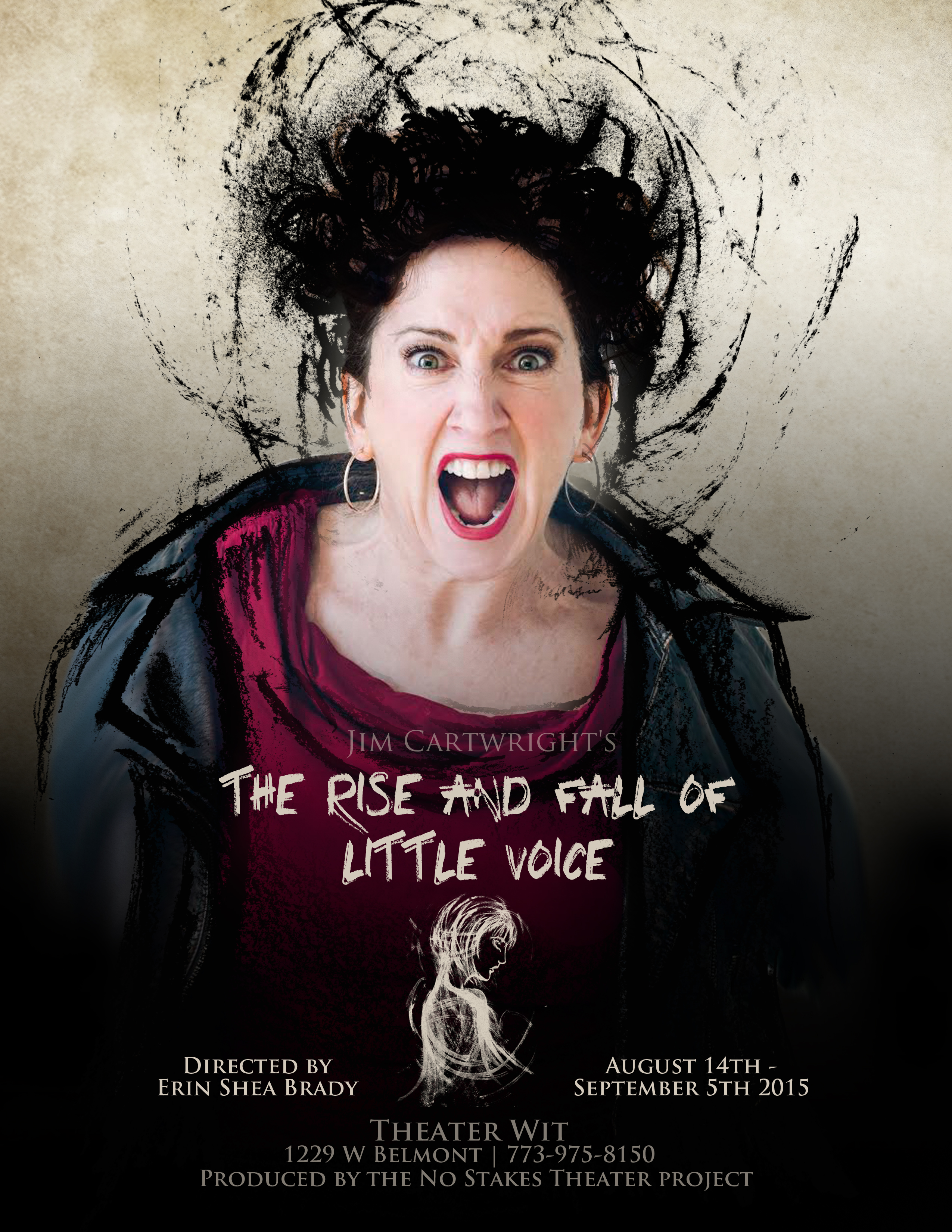 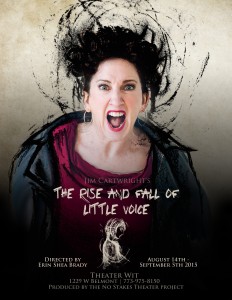 No Stakes Theater Project, a growing platform that supports the development of Chicago’s emerging theater artists, presents Jim Cartwright’s THE RISE AND FALL OF LITTLE VOICE, from August 14-September 5, 2015 with Press Opening Monday, August 17 at 7:00 PM at Theater Wit (Theater One), 1229 W. Belmont Ave.  The production is directed by Erin Shea Brady and follows a successful public reading of the play in August 2014.  LITTLE VOICE was last produced in Chicago in 1994 by Steppenwolf Theater Company.  The production featured Rondi Reed, Hynden Walch, Karen Vaccaro and Ian Barford — it premiered on Broadway shortly following the Steppenwolf run.

“I was truly impressed with Erin Shea Brady’s direction of THE RISE AND FALL OF LITTLE VOICE when I saw the staged reading.  She had gotten specific performances out of her actors and I think with a proper rehearsal and with production elements, she will really dig into the world of the play and its people.  She is an extremely talented young director who has had her eye on this play for a long time and is ready to tackle fully.”

The play (also a 1998 film starring Michael Caine) takes place in a small factory town in Northern England, circa 1989. “Little Voice”, or LV, is cripplingly shy. She spends her time in her bedroom, listening to her late father’s records — Judy Garland, Edith Piaf, Marilyn Monroe, et al. When LV’s mother, Mari, starts dating a talent scout, he discovers that LV can impersonate the singers she loves. When he puts LV up on stage at a local cabaret club, the two women are forced to compromise what sustains them.  Cartwright’s play is wildly funny, dark and biting.

Jim Cartwright (Playwright) won the Laurence Olivier Award for Best Comedy for THE RISE AND FALL OF LITTLE VOICE in 1993.  His plays are consistently performed around the world, where they have won numerous awards, and been translated into 30 languages. His first play, ROAD (1986), opened at the Royal Court in 1986, and was subsequently revived that same year and again in 1987, before being taken on a nationwide tour. ROAD won the Samuel Beckett Award, Drama Magazine’s Best New Play Award, and was joint winner of the Plays And Players Award and The George Devine Award.  In 1988, ROAD was produced by The Lincoln Centre, New York, and is now considered a modern classic. Other works include: BED (1991), at the Royal National Theatre in 1989; TWO (1991), at the Octagon Theatre, Bolton in 1989, and transferring to The Young Vic, London in 1990, winning the Manchester Evening News Best New Play Award; EIGHT MILES HIGH (Octagon Theatre, Bolton 1991 and again in 2005), and Theatre Royal, Bristol, 1994, revived there again in 1995. This play was nominated for the TMA best musical award, and in 1997, a production of the play at the Reykjavik City Theatre, Iceland, ran for a year, breaking box office records. THE RISE AND FALL OF LITTLE VOICE (1992), was performed at the Royal  National Theatre in 1992 and at The Aldwych Theatre in London’s West End, later that year. The production was nominated for six Olivier Awards (winner – Best Comedy) and was winner of The Evening Standard Award for Best Comedy of the Year in 1992.  It opened on Broadway in 1995 and was adapted into the Oscar-nominated film Little Voice in 1998.  Jim wrote and directed I LICKED A SLAG’S DEODORANT(1996), for the Royal Court at The Ambassador’s Theatre in London’s West End in 1996; PRIZE NIGHT for the Royal Exchange Theatre (1999), and HARD FRUIT (2000) for the Royal Court Theatre in 2000.  In 2008 his first novel,Supermarket Supermodel, was published.  Jim Cartwright has been made an Honorary Fellow of the University Of Bolton, a visiting Professor at Salford University and his old school, Harper Green, have named a building in his honour.

Erin Shea Brady (Director) is the founder and creative director of No Stakes Theater Project.  In the summer of 2014, she directed the staged reading of Jim Cartwright’s THE RISE AND FALL OF LITTLE VOICE at The Foxhole Chicago and completed a casting internship at Steppenwolf Theater Company.  Erin graduated from the directing program at Columbia College Chicago in 2013.  There, she directed ALL MY SONS (Arthur Miller), KILLERS (John Olive) and STATURE OF GOD (Ian Michael James).  She assistant directed the 2014 Senior Showcase, which was directed by Steve Scott.  Other assistant directing credits include: RAPTURE BLISTER BURN (Goodman dir. Kimberly Senior), INANA (TimeLine dir. Kimberly Senior), FOUR (Jackalope dir. Nate Silver), STRANDLINE (A Red Orchid dir. JR Sullivan).  Dramaturgy credits include: TRAVESTIES (Remy Bumppo), OUR CLASS (Asst., Remy Bumppo), LOST IN YONKERS and DETROIT ‘67 (Asst., Northlight), and MUD BLUE SKY (Asst., A Red Orchid).

No Stakes Theater Project is a fiscally-sponsored organization that supports the development of emerging theater directors through staged readings, fostered collaborations, and productions of exceptional work. Our mission is to provide an environment in which emerging theater artists can take major artistic risks that will further their development, diversify artistic collaborations and foster their individual artistic sensibilities. This is the first major production produced by No Stakes Theater Project.  We are fiscally sponsored by Fractured Atlas. For more information, visit nostakestheaterproject.org