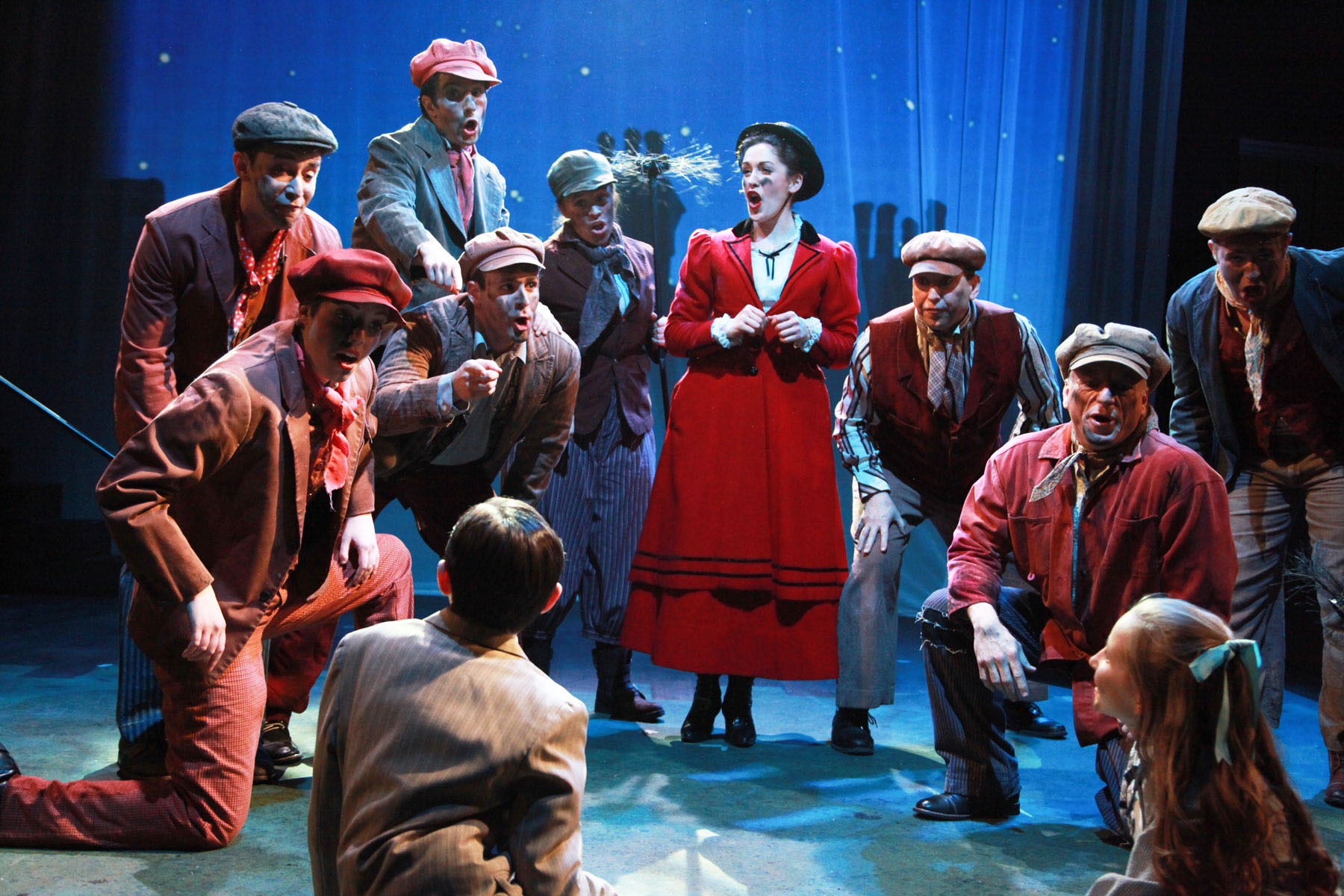 NightBlue Performing Arts Company is pleased to present the Chicago Non-Equity premiere of Disney and Cameron Mackintosh’s MARY POPPINS, a musical based on the stories of P.L. Travers and the Walt Disney Film, with original music and lyrics by the Academy Award-winning team of Richard M. Sherman and Robert B. Sherman, book by Julian Fellowes, new songs and additional music and lyrics by George Stiles and Anthony Drewe and co-created by Cameron Mackintosh. MARY POPPINS will play February 28 – March 27, 2016 at Stage 773, 1225 W. Belmont Ave. in Chicago. Photos by Emily Schwartz.

MARY POPPINS is the story of the Banks family who live in a big house in London on Cherry Lane. Things are not going well for the family. The children, Jane and Michael, are out of control and are in need of a new nanny. They have their own ideas about what sort of caretaker they should have, while their parents – in particular Mr. Banks – are insistent on someone strict for the job. When a mysterious young woman named Mary Poppins appears at their doorstep, the family finds that she’s the answer to their prayers, but in the most peculiar way. Mary Poppins takes the children on many magical and memorable adventures, but Jane and Michael aren’t the only ones she has a profound effect upon. Even grown-ups can learn a lesson or two from the nanny who advises that “anything can happen if you let it!”

Comments Director David E. Walters, “Many folks think of the magic and magnificence of Mary Poppins on the big stage.  At NightBlue, we are excited to tell you an intimate story of a family that discovers what is most important in life with the aid of a determined nanny. Oh, and don’t worry, we’ll sprinkle plenty of fairy-dust over this tale. Appropriate for any age, our Mary Poppins will help families want to make time for dinner together!”

Based on: the stories of P.L. Travers and the Walt Disney Film

NightBlue Performing Arts Company is a Jeff-award winning Illinois 501(c)(3) not-for-profit company servicing the Chicago metropolitan area.  Since bursting on the scene in 2007 with the Chicago Non-Equity premiere of Miss Saigon, NightBlue has proven to be an electric addition to Chicago’s off-Loop theater landscape, producing over 30 shows in nine seasons, including Best Musical Jeff Award nominations for Avenue Q and Spamalot in two of the last three seasons. Last season, NightBlue partnered with a NYC and Puerto Rican Company to tour an original Equity production about the life of Roberto Clemente. Led by an engaging and diverse Board of Directors, with corporate members from organizations like PWC, KPMG LLP, Abbott Laboratories,and Shephard Mullin LLP, NightBlue makes its mainstage home at Stage 773 in Chicago’s Lakeview neighborhood. NightBlue has roots on the southside of Chicago with administrative offices in Lemont, IL and focuses part of its mission on working with children, annually conducting a children’s theater immersion at Everest Academy in Lemont and a Summer Theatre Festival in New Buffalo, Michigan, which includes a ten-day youth theatre immersion for children of all ages. NightBlue encourages innovation and creativity in a safe and educational environment. It seeks truth and honesty in performance through self-exploration. No masks, no walls, all honesty. For additional information, visit www.nightbluetheater.com.