Disney’s NEWSIES– This Show Strikes at The Heart 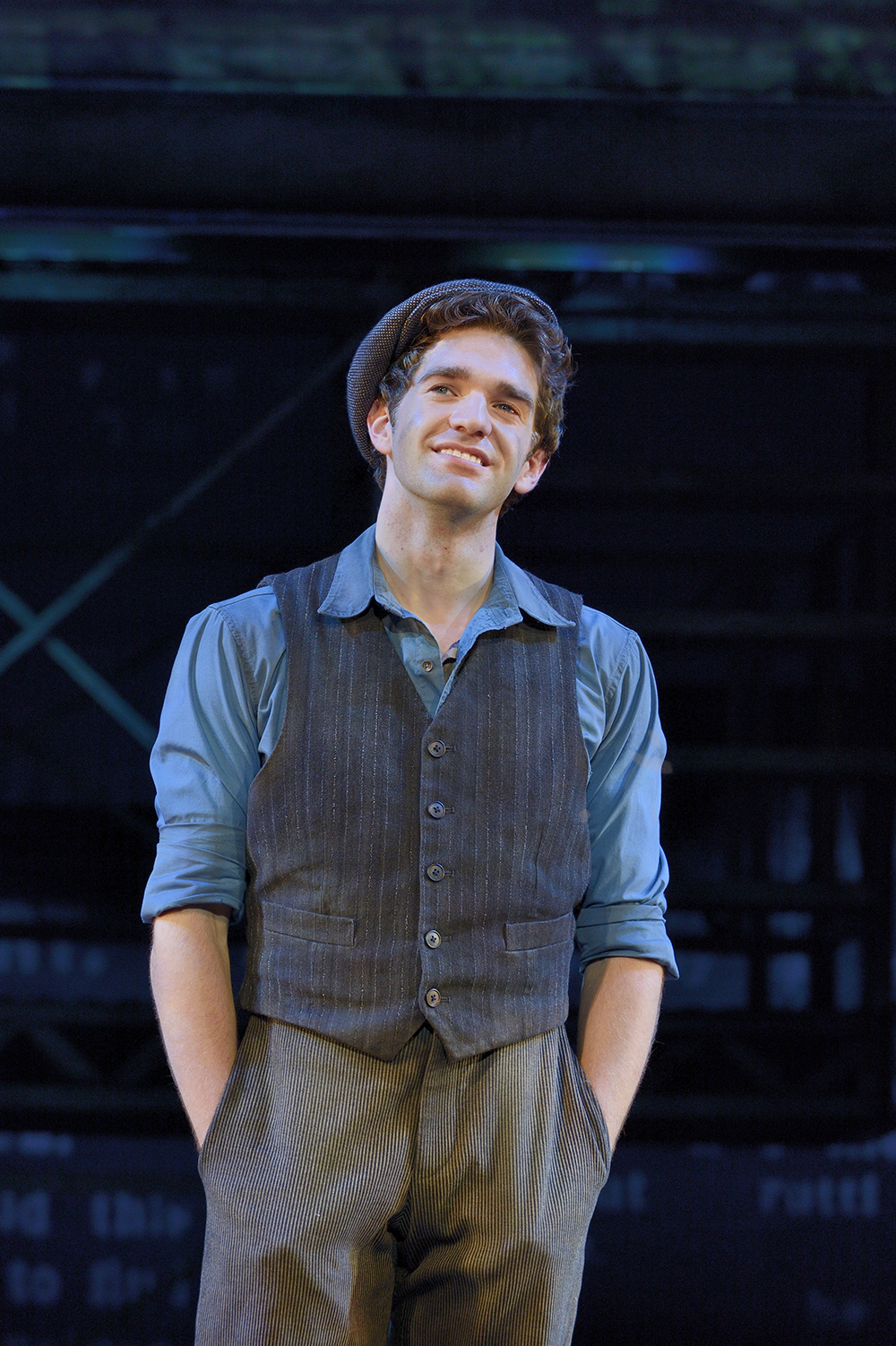 Disney’s musical Newsies is inspired by the real-life “New-York Newsboys Strike of 1899” which began when newspaper publishers raised the price of papers which the “newsies” (the boys who sold the papers on the streets) charging a dime more per hundred papers. Now in today’s money that does not seem like much but in 1899 a dime would pay for 2 meals. A David vs Goliath story Newsies is about what the working class people can accomplish when they band together against the greed of corporations (sound familiar?).

Originally the production began as a movie in 1992 which proved disastrous at the box office, however developed a big following by fans called “Fansies” which have kept it alive and led Disney and its creators to consider making it in to a stage musical. I admit that I had no desire in seeing Newsies because I was turned off by the name and thought this was a schmaltzy Disney musical about a bunch of dancing poor waifs like a bad Oliver! (this shows the importance of branding and marketing a show). It was only through a good friend of mine who wished to see this that I decided to go and review it. Well, I can say that I was wrong about all previous assumptions I had made. This show has heart and soul and tackles a timely subject; corporate greed and how the little guys, who feel powerless can band together to bring about change.

With America’s ever growing greed and the corporations having purchased our Congress through lobbyists 98% of the population have experienced what the newsies did when the price of their papers was raised with the collusion of the big 3 publishers; William Randolph Hearst, Joseph Pulitzer and other powerful publishers. So they decided to create their own Union and take a stand, led by newsboy Kid Blink (who becomes the central character of Jack Kelly in Newsies). In spite of taking a significant beating from the cops at the hands of the publishers, they stood their ground for 2 weeks until Pulitzer gave in to their demands and they reached a compromise by raising the price of papers by 5 cents and the newspaper companies agreeing to buy back newspapers that the newsies did not sell.

The creative team of Newsies crafted a huge hit which, in 2012 was nominated for 23 major theatrical awards (winning 2 Tonys, 2 Drama Desk awards and 3 Outer Critics awards) and this first-class, national touring production is one of the finest I have ever seen come through Chicago in years.

Harvey Feirstein’s book has humor, heart and soul. Alan Menken’s gorgeous memorable score (reminiscent of a Richard Rogers score) is outstanding and Jack Feldman’s lyrics are strong (they added 6 new songs to the musical that were not in the movie).

However the heart of this production is an amazing ensemble cast, all magnificent dancers and singers who seem to defy gravity with the most glorious choreography (Tony Award winning) by Christopher Gattelli. There is not one weak link in the entire cast of thirty-eight. From the moment the show begins time flies and you are pulled into their story and care deeply about each and every one of them.

The two leads Dan DeLuca (Jack Kelly) and Stephanie Styles (Katherine Plumber) are not only spectacular in their own right but as a couple possess the chemistry that wins over your heart (the audience stood and cheered when Deluca came out for his bow).

Steve Blanchard’s Joseph Pulitzer rounds out the triangle with a strong performance and great voice and Vincent Crocilla (Les), the youngest member of the cast, has the audience laughing with his highly energetic and engaging performance.

The original Broadway set by designed by Tobin Ost for its immense size is remarkably nimble and constantly moving and provides the hard, urban landscape for the story (how refreshing to get the original set from Broadway and not a cheap, scaled down one).

The best compliment that I can give this great touring production is that it has a unified feel to it, from outstanding direction by Jeff Calhoun to the design and great orchestra.

But the thing I will always remember about this Newsies is a timely and universal story, told by a great cast with two great leads that touched my heart and provided me a bittersweet look at America’s once great strength when people were willing to compromise and work together toward a common goal.

People should run, not walk to see this rare Broadway in Chicago event and rethink they manner in which they relate to others and what can be accomplished if we stand up against the corporate bullies.

Newsies runs through January 4, 2015 at the Oriental Theatre.  For more information visit BroadwayInChicago.com or TheatreinChicago.com/newises.