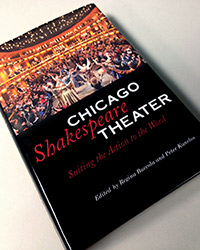 Chicago Shakespeare Theater (CST) announced today the release of Chicago Shakespeare Theater: Suiting the Action to the Word, a collection of original essays that furthers the study of William Shakespeare in performance and stagecraft through the exploration of the Theater’s first twenty-five years. Respected scholars, artists and theater critics view Shakespeare through the lens of the theater’s artistry, bringing together professional observations and scholarly examinations of CST Artistic Director Barbara Gaines’s productions as well as collaborations with world-renowned directors who have worked at CST, including Michael Bogdanov (The Winter’s Tale – 2003); Edward Hall (Rose Rage: Henry VI, Parts 1, 2, and 3 – 2004) and Josie Rourke (The Taming of the Shrew – 2010).

“Within the broad scope of Shakespeare scholarship, performance studies has taken on great prominence over the course of the past two decades, elevating the significance of the interpreted work on stage and film, and returning performance to its original importance in Shakespeare’s own career,” said CST Director of Education and Communications, Marilyn Halperin. Halperin noted, “The work of major theaters devoted to Shakespeare’s work, like Chicago Shakespeare here in the United States, has become a primary source for scholars advancing the study of Shakespeare and early modern theater.“

Compiled and edited by CST Scholar-in-Residence Regina Buccola and Valparaiso University Dean and Professor of Literature and Humanities Peter Kanelos, the collection offers a comprehensive view of Chicago Shakespeare Theater’s award-winning productions, community and educational outreach, and international collaborations. Celebrating twenty-five years of producing history, the introduction champions that “Chicago Shakespeare has brought new audiences to Shakespeare, invigorated audiences who had become settled in their expectations, provoked reflection, generated debate, and challenged orthodoxies, all while presenting on its stages work that has garnered worldwide acclaim.”  By spanning a full spectrum of thought on theater-making at Chicago Shakespeare, the collection further serves to document the state of Shakespeare in America today.

Published by Northern Illinois University Press, Chicago Shakespeare Theater: Suiting the Action to the Word will be available for purchase at the Theater during performances and online at www.chicagoshakes.com/store for $30. The text can also be found in hardcopy and e-book formats through major online book retailers like Amazon and Ebay.
ABOUT THE EDITORS
Regina Buccola is an associate professor of English at Roosevelt University in Chicago, where she specializes in Shakespeare, non-Shakespearean early modern drama, and Women’s and Gender Studies. Her work has appeared in numerous journals, including Sixteenth-Century Studies and Early Theatre Journal. She is the author of Fairies, Fractious Women and the Old Faith: Fairy Lore in Early Modern British Drama and Culture and the co-editor with Lisa Hopkins of Marian Moments in Early Modern Drama.

Peter Kanelos is dean of Christ College and associate professor of the Humanities at Valparaiso University. He was, most recently, assistant professor of dramatic literature, theater history and dramaturgy at Loyola University Chicago. He earned his PhD from the University of Chicago and has taught at Stanford and the University of San Diego, where he was also on the faculty of the Old Globe MFA in Dramatic Arts program. A specialist in Renaissance stage practices, Dr. Kanelos has published widely on Shakespeare and his contemporaries. His recent publications include Thunder at a Playhouse: Essaying Shakespeare and the Early Modern Stage and The New Kittredge Much Ado About Nothing. He is currently at work on The History of Drama and The Cambridge Introduction to Dramatic Theory and Criticism.

ABOUT CHICAGO SHAKESPEARE THEATER
Chicago Shakespeare Theater is one of America’s largest and most celebrated theaters, producing and presenting a year-round season encompassing more than 600 performances at its home on Navy Pier. Its productions are also featured around the globe at the world’s most venerable theaters and festivals, including the Donmar Warehouse, Market Theatre of Johannesburg, Royal Shakespeare Company, Edinburgh Festival Fringe and Grahamstown’s National Arts Festival. Recipient of the Regional Theatre Tony Award, Chicago Shakespeare’s work has been recognized with three of London’s prestigious Laurence Olivier Awards, and by the Chicago theater community with 70 Joseph Jefferson Awards for Artistic Excellence. Under the leadership of Artistic Director Barbara Gaines and Executive Director Criss Henderson, CST is dedicated to producing extraordinary productions of classics, new works and family fare; to unlocking Shakespeare’s work for educators and students; and to serving as Chicago’s cultural ambassador through its World’s Stage Series, an initiative that brings the world’s most exciting theatrical events to Chicago audiences and presents Chicago Shakespeare’s work abroad.