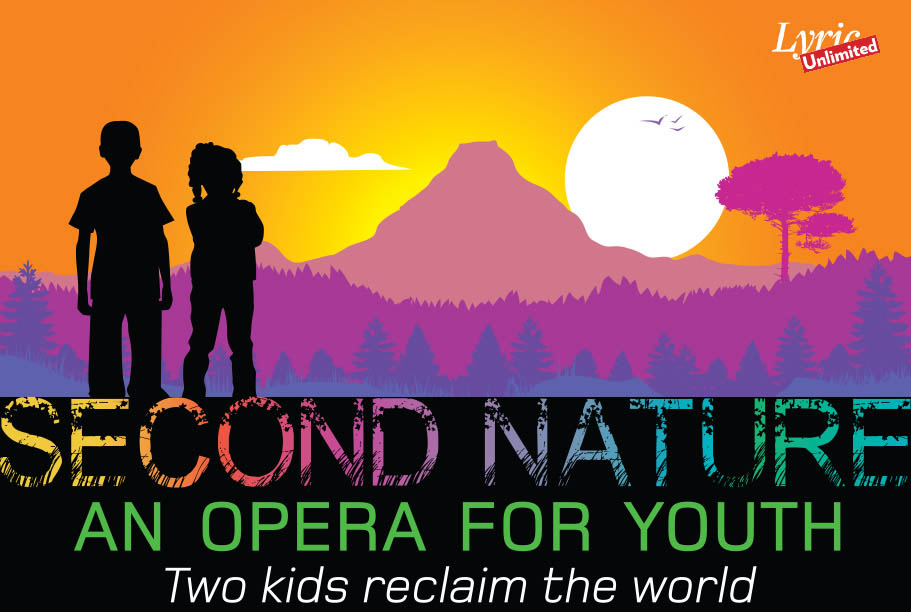 The performance is free and open to the public. Reservations are required and are available starting Saturday, August 22 at 10am. For more information or to reserve a free ticket, visit lyricopera.org/secondnature

Second Nature, commissioned by Lyric Unlimited, had its world-premiere performances this week, August 19 and 20, at Lincoln Park Zoo’s Café Brauer.

“The score [is] inventive, with its suggestions of Debussy here, neoclassical Stravinsky there, but all of it very much Aucoin’s own,” according to the Chicago Tribune. “The show is full of whimsical touches, including a talking ape…and colorful painted set designs of zoo animals and foliage.”

Set in a fictional future when humans have retreated from nature because of the deteriorating environment, Second Nature tells the story of two inquisitive and courageous youths who decide to leave the safety of their artificial habitat (an abandoned zoo) and work to heal the planet. Second Nature is recommended for children ages 7 to 12.

Matthew Aucoin is an award-winning composer, pianist, poet, and conductor. He has been called “Opera’s great 25-year-old hope” by The New York Times Magazine. His opera, Crossing, recently received its world premiere at the American Repertory Theater in Boston, and he is working on a new opera for the Metropolitan Opera/Lincoln Center Theatre’s commissioning program. Earlier this summer he completed his two-year tenure as the Solti Conducting Fellow at the Chicago Symphony Orchestra and has served as an assistant conductor at the Metropolitan Opera and Rome Opera.

“Lyric is thrilled to present the latest new work from Matthew Aucoin, one of opera’s rising young stars, at the Francis W. Parker School this fall,” said Anthony Freud, Lyric’s general director. “Our creative consultant Renée Fleming flagged Matthew as a composer to watch several years ago, and we are delighted to be one of the first companies to have commissioned and premiered a work by this outstandingly talented composer, librettist, and conductor.”

“Two facets of Lyric Unlimited’s mission are to identify and nurture new operatic talent and to present opera that explores contemporary themes in unexpected venues.Second Nature succeeds on both counts,” added Cayenne Harris, director of Lyric Unlimited. “We are so pleased that families will be able to enjoy this work in the Diane and David B. Heller Auditorium of Francis W. Parker School.”

Second Nature will also be presented at schools and community venues around Chicago this fall as part of Lyric Unlimited’s ongoing Opera in the Neighborhoods program.
Sponsors

Lyric Unlimited was launched with major catalyst funding from The Andrew W. Mellon Foundation and receives major support from the Hurvis Family Foundation.

About Lyric and Lyric Unlimited

Lyric Unlimited is a long-term, evolving initiative that encompasses company activities that are not part of Lyric’s mainstage opera season. Its mission is to provide a relevant cultural service to communities throughout the Chicago area and to advance the development of opera by exploring how opera as an art form can resonate more powerfully with people of multiple backgrounds, ethnicities, and interests. It also leads the development of innovative partnerships with a wide range of cultural, community, and educational organizations to create a breadth of programming through which Chicagoans of all ages can connect with Lyric. In the 2014/15 season, more than 126,000 children, students, and adults participated in Lyric Unlimited activities. For more information about Lyric Unlimited program offerings, visit lyricopera.org/lyricunlimited.