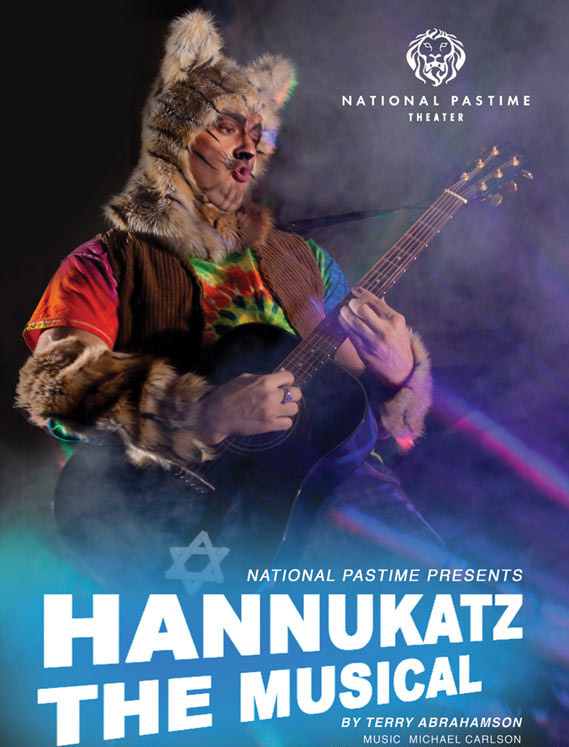 The New National Pastime Theater presents, back by popular demand, 2200 years in the making, here to fill the holiday vOY-OY-OYd!, the only rock ‘n’ roll Hannukah musical on earth, HANNUKATZ THE MUSICAL! Director Shifra Werch creates a new production in The National Pastime Theater’s recently acquired Uptown theater. You’ve seen The Nutcracker, now see “the Wisecracker,” more pa-rum-pa-pum-pumped full of Rock n Roll and laughs for the whole family than the holidays have ever been! Inspired by Terry Abrahamson’s best-selling, HANNUKATZ SAVES HANNUKAH, HANNUKATZ THE MUSICAL! is recommended for those who celebrate Hannukah and those who don’t.

Starring Wellington Da Silva as the tie-dyed Meowmulkah-sporting title character on his Hannukah-eve visit to the Skokie-based Moskowitz family’s Hannukah-hating kids. Isaac Samuelson and Maren Rosenberg portray the Moskowitz kids Josh and Emily with Rachel Pallante and Jordan Levin as their parents Syl and Gil. Self-described in his Jerry Lee Lewis-inspired theme song as “a catnippy, kinda trippy, chocolate chippy old hippie,” Hannukatz is a 6’7″ talking, rocking, cat armed with an arsenal of rousing Hannukarols like “Do the Chhhh,” “No Jews Allowed,” and “Hannukah is Not the Jewish Christmas.” Grammy-winner Abrahamson (book/lyrics) and collaborator Michael Carlson (music) bring the audience into the musical world

Performances begin November 29th and run through December 30th. Shows are Fridays and Saturdays at 8pm with Saturday and Sunday 3pm matinees.

Tickets are $25. Kids 12 and under are $10. Tickets can be purchased at http://hannukatz.brownpapertickets.com or the box office at 773-327-7077. Call for group discounts on parties of ten or more.

New Year’s Eve Masquerade: At the Exact Center of the Universe

The National Pastime Theater closes out the year with a New Year’s Eve masquerade ball At the Exact Center of the Universe. Bring in the new year with wild acts, live blues with Kent Duchaine and his LeadBessie (kentduchaine.com/), exquisite food from local Chicago restaurants, silent auction and a raucous atmosphere, all while supporting the arts.

The National Pastime Theater hosts its Masquerade Ball at the Exact Center of the Universe December 31st 2012. Doors open 8pm and close when the last mask drops to the floor. Tickets are $100 per couple ($50 single) in advance and $150 per couple ($75 single) after December 25th.

The New National Pastime Theater is located within the rediscovered historic Masonic Hall in the Preston Bradley Center at 941 W Lawrence Ave. 4th Floor in Chicago. The curious and bold can discover us via the Red Line Lawrence El stop. Bus routes 36, 81, 145 and 151 are all within three blocks of the theater. Street parking is available or Weiss Hospital offers $5 all night parking two blocks south east for NPT guests.

BYOB is always encouraged for our adventurous patrons and guests.