My Son The Waiter: A Jewish Tragedy Comes to the North Shore Center 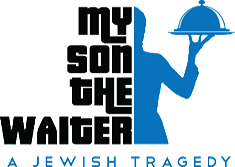 The fact that Brad Zimmerman has put the time in to work on his craft is an understatement. He spent 29 years “temporarily” waiting tables in New York, while continuing to pursue his dream of comedic acting. In My Son the Waiter: A Jewish Tragedy, he tells the story of his journey, along with a chronicle about his childhood, family, and misbegotten love life with warmth, wit, self-deprecating humor, and wicked charm, and combines his years of training as an actor with his innate comedic talent.

In his 90-minute show, Zimmerman also reviews the trials and tribulations of waiting on tables – particularly for someone not exactly invested in that career, and with little tolerance for finicky diners:

“I don’t want 60 questions, get to the point!” he said he would tell restaurant patrons when he sat down for a recent interview for The New York Times. He joked that if diners prefaced their orders by saying they were in a hurry he would say “So go!” He says he did enjoy some of the bantering he did with diners, and often tried out material on them, however there were also ‘the bossy customers who would snap their fingers to get his attention… and the health-food obsessives who elaborately customized their orders and button-holed him over ingredients.’  As he says in My Son the Waiter: A Jewish Tragedy, he was convinced his epitaph would read “I’ll be right with you.”

Eventually his determination and hard work paid off, and Zimmerman went on to act – he had a small part in “The Sopranos” playing Johnny Sack’s lawyer – and to become the opening act for a number of well-known entertainers, including George Carlin, Brad Garrett, Dennis Miller, Julio Iglesias, and 6 years with Joan Rivers who said “I’ve had three great opening acts in my lifetime: Billy Crystal, Garry Shandling, and Brad Zimmerman.”

Zimmerman worked on the script for My Son the Waiter: A Jewish Tragedy for nine years, and performed it in small venues all over the country, including a stint at Stage Door Theatre in Florida, where it came to the attention of producers Dana Matthow and Philip Roy (Respect: A Musical Journey of Women, Old Jews Telling Jokes, My Mother’s Italian, My Father’s Jewish & I’m in Therapy). Since then, My Son the Waiter: A Jewish Tragedy spent two years at Off-Broadway’s Stage 72 at the Triad Theatre in New York, and has toured the USA from coast-to-coast.