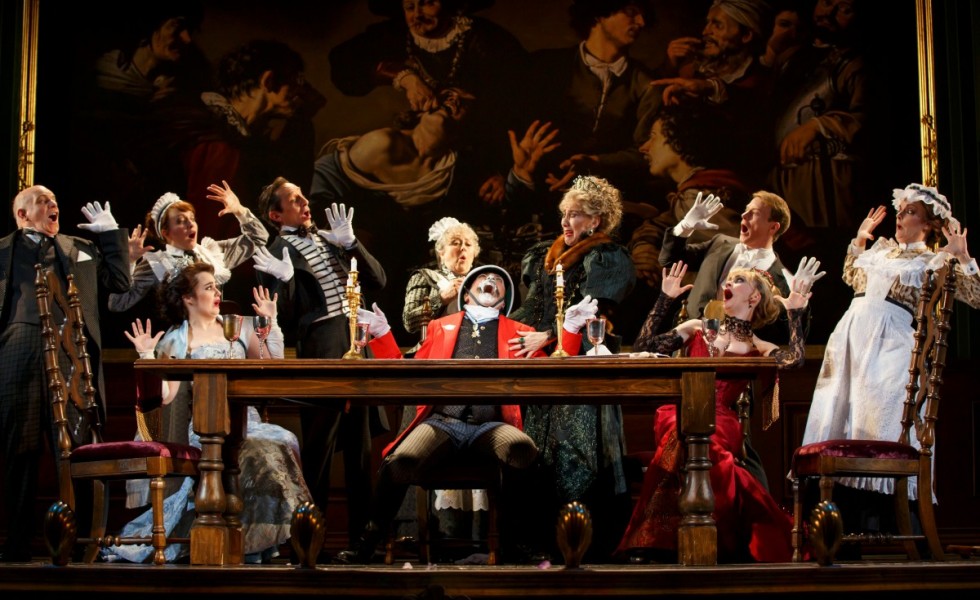 Broadway in Chicago has kicked off its 2015-16 season with a winner; the long anticipated, multiple Tony-Award winning musical A Gentleman’s Guide to Love & Murder. The opening night of the show had an electricity of anticipation in the air and this show did not disappoint; in fact people were cheering long after the curtain call. With its overall stellar quality it actually felt like Broadway has come to Chicago with a flawless winner of a show.

Winning the 2014 Best Musical Tony (and it is apparent why it won) Gentleman’s Guide is the uproarious story of Monty Navarro (played magnificently by the handsome and immensely talented Kevin Massey), a distant heir to a family fortune who sets out to jump the line of succession by any means necessary; even murder. All the while he has to juggle a mistress Sibella Hallward (a pitch perfect performance by Kristen Beth Williams) who is after more than his love, his fiancé and distant cousin Phoebe D’Ysquith (brilliantly realized by Adrienne Eller) and the constant threat of being behind bars for…well murder. All three of these actors have outstanding operatic voices which the score takes full advantage of and, being a stickler for diction and being able to understand the lyrics of a show I give them all an A+.

The D’Ysquith family is a collection of British, aristocratic eccentric, in-bred and nasty people (all played by the brilliant John Rapson who has the audience on the floor with his many characterizations) who refuse to recognize Monty Navarro as one of their own. Systematically Monty plots and executes each of their demise which drives the non-stop laughs with its gruesome hilarity (the scene where Rapson is stung to death by bees is particularly funny and stops the show). With only a cast of fifteen the brilliance of this cast makes it feel like you are watching thirty.

Taking much of its lead from the classic Alec Guinness movie Kind Hearts & Coronets, Gentleman’s Guide is the perfect storm of creativity at its absolute finest. The book by Robert L. Freedman coupled with the beautiful and patter like Gilbert & Sullivan inspired music and witty Cole Porteresque lyrics by Steven Lutvak with masterful orchestrations by the incomparable Jonathan Tunick and flawless direction by Darko Tresnjak Gentleman’s Guide never goes over the top but builds like a steamroller in laughs and keeps you on the edge of your seat waiting with glee for the next murder. The show is a delicate soufflé which can be easily deflated if one of the ingredients is wrong or the oven door is slammed too hard.

The clever Gilbert & Sullivan inspired Victorian toy stage design, conceived brilliantly by set designer Alexander Dodge, married to Aaron Rhyne’s Technicolor projection design create the perfect backdrops for the many locations and hilarious murder sequences while keeping the frantic pace of the show clipping along at breakneck speed. It is one of the cleverest and visually gorgeous sets I have seen in quite a while.

Linda Cho’s costumes are not only beautiful but cleverly constructed to accommodate John Rapson’s split-second changes into the various D’Ysquiths (this is reminiscent of The Mystery of Irma Vep). He must have assistance from many dressers backstage in order to pull it off so smoothly.

I find it refreshing to leave the theatre actually humming the tunes of a new musical and feeling like I have been fully entertained. With the glut of mindless jukebox musicals being cranked out it is refreshing to see a new musical that is cleverly constructed and beautifully executed. Steven Lutvak is a godsend to musical theatre and infuses freshness into the old-fashioned classic American musical.

Gentleman’s Guide is beginning its American tour here in Chicago and we only have this gem for two weeks. RUN to the theatre! You will leave the theatre much lighter after laughing for two hours.

It is in a limited engagement through October 11th at the Bank of America Theatre. Tickets range from $25 to $123.00 and are available by calling 800-775-2000 or visiting Broadway in Chicago Box Offices or through Ticketmaster. Visit BroadwayInChicago.com