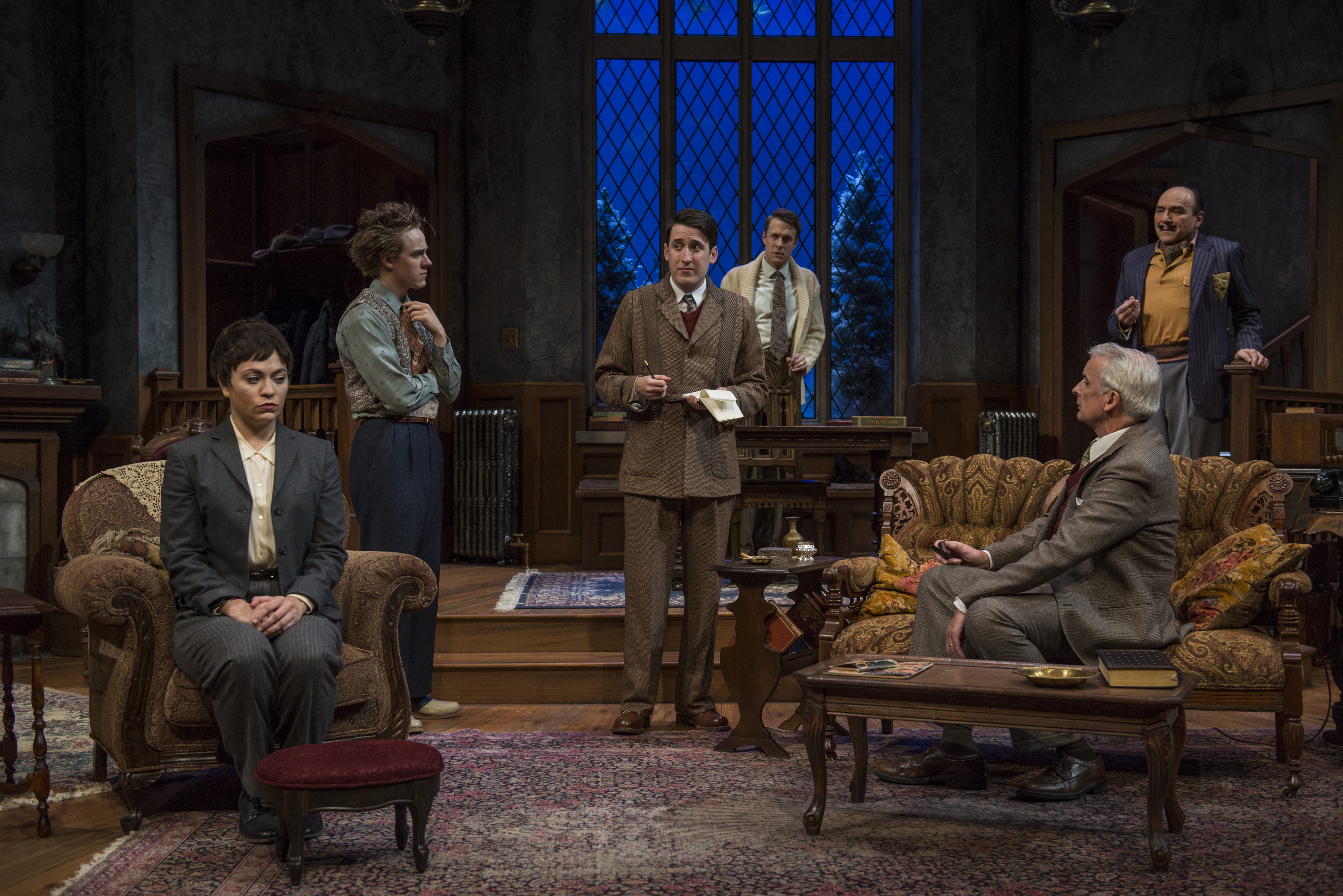 This thought is mentioned at the outset by a key character in Agatha Christie’s classic and cleverly plotted whodunit, The Mousetrap, and hangs over the grim proceedings unfolding at a snowbound rooming house like an ominous gray storm cloud ready to burst at any moment.

This year marks the 125th anniversary of the birth of Agatha Christie, and I suspect that the Milwaukee Repertory Theater’s engrossing production of her most famous stage play that opened recently in the Rep’s Quadracci Powerhouse in downtown Milwaukee would make Christie proud.

A murder occurs in a rooming house in rural England in the dead of winter right after World War II.  Who among the guests and hosts is guilty?  That is the question asked by a police inspector who must unmask a killer before he or she strikes again. Paranoia sets in and accusations fly – all leading to an unexpected final plot twist that shocked the audience into stunned silence.  So riveting is this show I noticed no one could bat an eye.

Albeit the plot The Mousetrap, which has been playing to sold-out audiences in London’s West End for over 60 years, is vintage Christie, it takes an expert cast to make it truly a “jolly good night in the theater.”  And here is where the Milwaukee Repertory Theater succeeds.

The cast brings this enjoyable whodunit to life with chilling perfection.  Brendan Meyer, a graduate of the Chicago College of Performing Arts, is superb as Christopher Wren, the flamboyant artist who is first to arrive at the rooming house; Greg Vinkler is an hilarious standout as Wren’s fellow guest, the mysterious Mr. Paravicini, and Laura Gordon as the demanding Mrs. Boyle and Greta Wohlrabe as the secretive Ms. Casewell give excellent performances. Rounding out the fine cast are Will Allan as Sergeant Trotter; Rep veteran Jonathan Gillard Daly as Major Metcalf, another guest at the rooming house, and Kelley Faulkner and Matt Mueller as the hosts, Mollie and Giles Ralston.  Vinkler is an award-winning actor who has done 34 productions with Chicago Shakespeare Theater; Allan and Mueller have also acted in numerous productions in Chicago.

With the perfect blend of intrigue and British tongue-and-cheek humor, the Milwaukee Repertory Theater’s production of The Mousetrap is as satisfying as a hot cup of tea on a chilly night.  Who ever thought murder could be this much fun?

Christie lovers in Chicago will have through Dec. 20 to make their way to Milwaukee to get ensnared in The Mousetrap in the Quadracci Powerhouse of the Milwaukee Repertory Theater, located at 108 E. Wells St.  Tickets start at $20 and are available by calling (414) 224-9490 or visiting www.MilwaukeeRep.com.