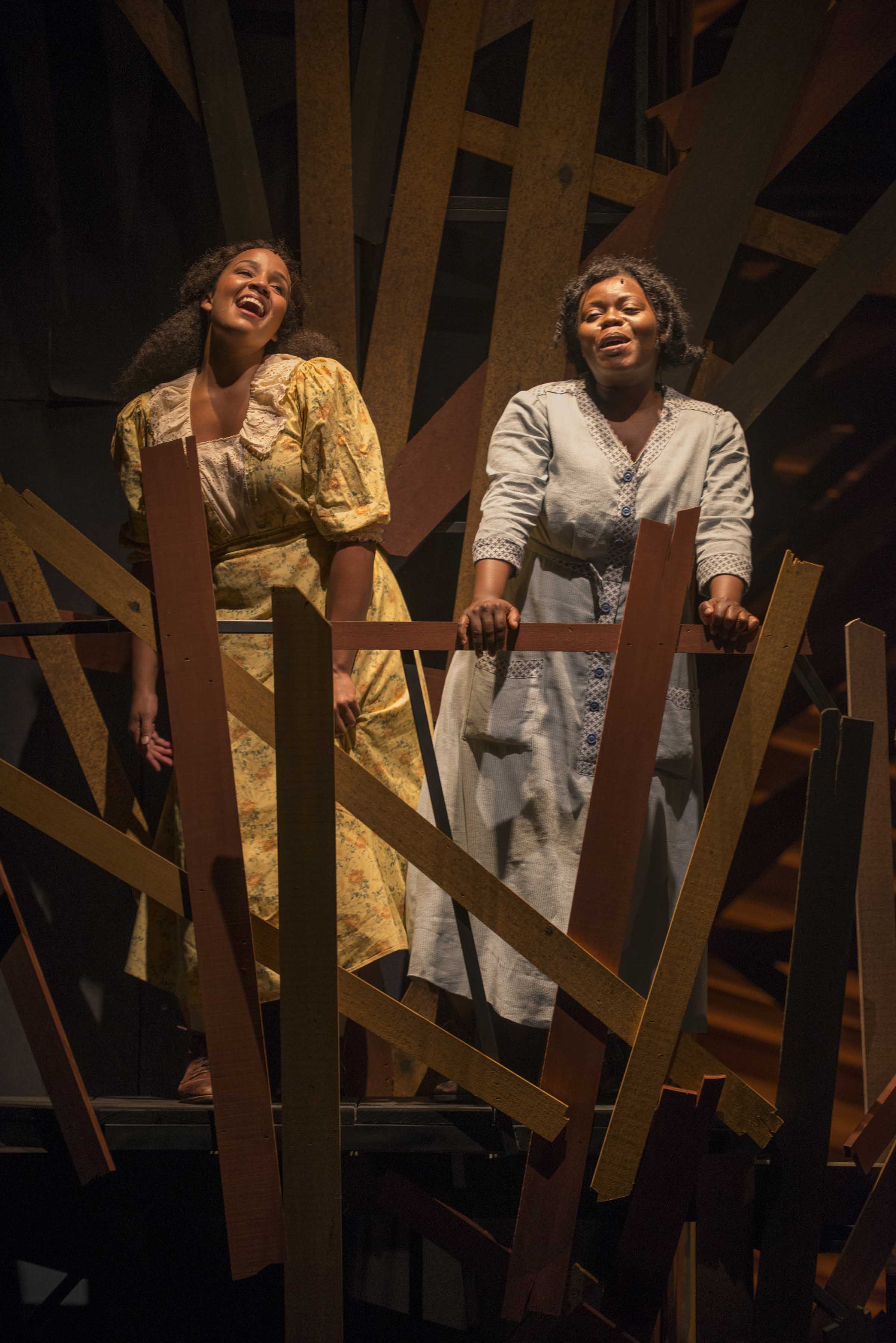 A news release issued by the Milwaukee Repertory Theater says The Color Purple reminds us that, “it only takes a grain of love to make a mighty tree.”

After seeing the Rep’s production of the Tony Award-winning and Grammy Award-nominated musical that kicked off its new season in the Quadracci Powerhouse in late September, I came to the conclusion that it took more than a single grain of love to make this show soar and bring an audience joyfully to its feet at curtain call on a sunny Sunday afternoon.  It took a passionate, electrifying cast and creative team to transform it into a sturdy oak blossoming with heart and soul.

Another Milwaukee review labeled this production “cluttered”. Granted, The Color Purple, Alice Walker’s Pulitzer Prize-winning novel, has enough characters and plot twists and turns to rival an episode of Downton Abbey, but that’s not what’s important here.  This is a story about hope, love and the ability to transform a life, about the journey of four women: Celie, Nettie, Shug and Sofia – each imbued with remarkable resilience.  Does the music, as this same review suggested, sugar coat the underlying themes of abuse and brutality?  I think not.  Rather, the soul-stirring, toe-tapping musical score, composed by Brenda Russell, Allee Willis and Stephen Bray, strengthens and renews the spirit of these women –and of us, too.  Case in point: a crowd-pleasing number in Act II, “In Miss Celie’s Pants” makes us cheer as Celie and her friends celebrate their new-found independence.

The Color Purple marks the fifth musical produced in the Rep’s Quadracci Powerhouse under the tenure of Artistic Director Mark Clements, an award-winning director whose work has been seen in more than 100 major theaters across Europe and the U.S.  With this rousing production of The Color Purple, Clements continues to display his knack for bringing new life to musicals that may have been forgotten, much like he did in previous seasons with Assassins and last year’s smash-hit, Ragtime.  In The Color Purple, Clements draws forth many superlative performances from the cast.  Standouts include Broadway veterans Zonya Love (“Celie”) and Nathaniel Stampley (“Mister”), who has also performed with the Chicago Shakespeare Theater; Christina Acosta Robinson (“Shug”); Jessie Hooker (“Squeak”); Bethany Thomas (“Sofia”), a Chicago theater veteran who appeared in Hairspray at the Drury Lane Theatre; and Stephanie Umoh (“Nettie”).

In a note published in the playbill, Clements reminds us that when Alice Walker’s novel The Color Purple first appeared in 1982, “it spurred lively conversations about gender race and class.”  He adds that this production at the Rep “aims to further such conversations across the City of Milwaukee.”  I sure hope he and the Rep achieve this goal.  Sadly, at the Sunday matinee I attended, I noticed no more than five or six African-Americans in the audience.

Chicagoans have through Nov. 2 to experience this unforgettable production of The Color Purple at the Milwaukee Repertory Theater, 108 E. Wells in Milwaukee’s Downtown Theater District.  Tickets begin at $30.  For more information call (414) 224-9490. To buy tickets online visit www.MilwaukeeRep.com.  For group tickets call (414) 290-5340.