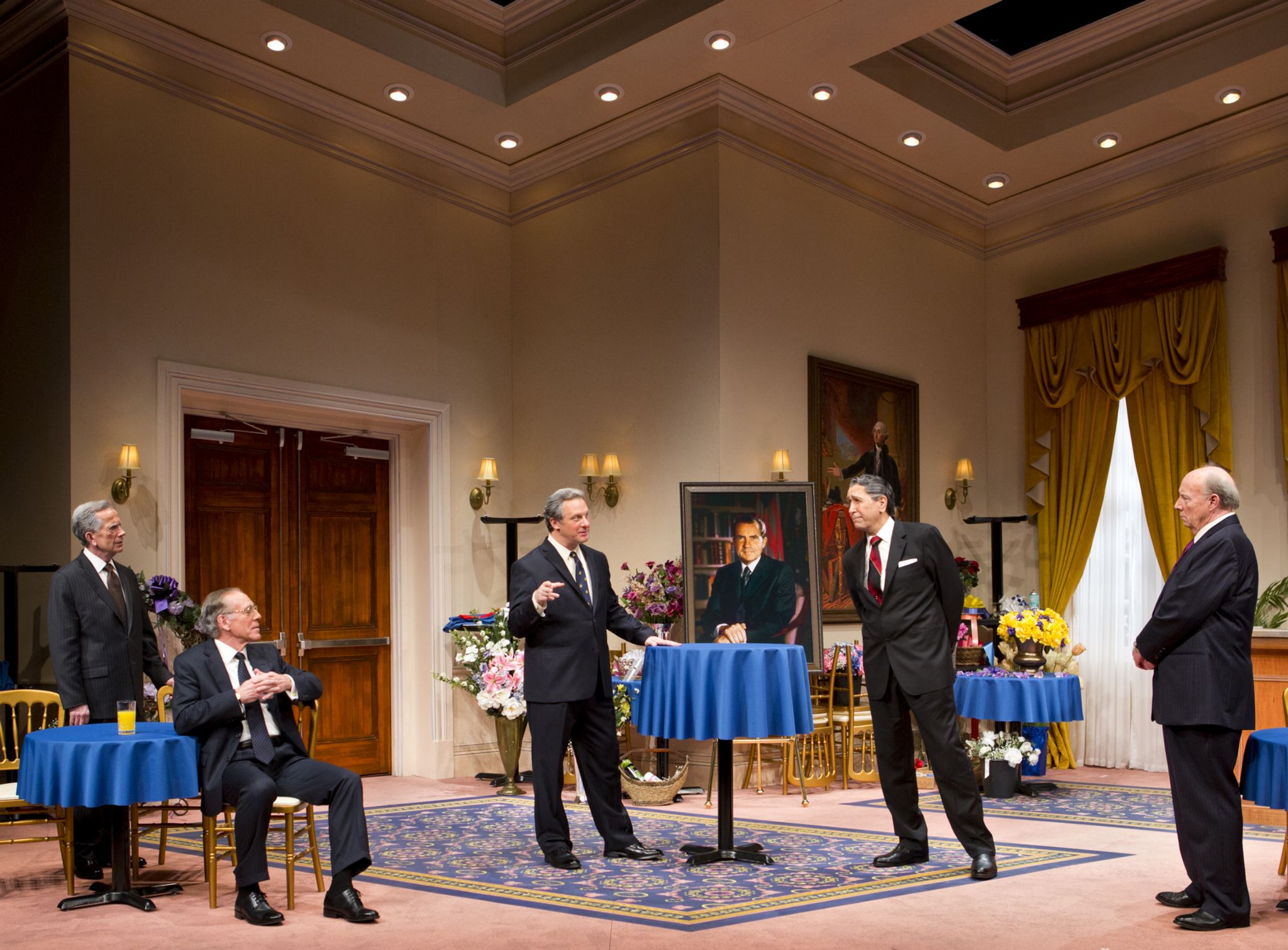 If you ever wanted to be a fly on the wall to know what goes on behind closed doors when a group of people are brought together in a room, regardless of circumstance, Rick Cleveland’s play Five Presidents, now being staged by the Milwaukee Repertory Theater gives you a golden opportunity to be just that – and what you hear is priceless.

And I can’t emphasize enough the word “hear.” It’s what you hear, not see in this play that’s important.

The setting of Five Presidents is the Nixon Library in California on April 27, 1994, the day of Richard Nixon’s funeral. Gathered before the service in the Executive Board Room are five members of “the most exclusive club in the world:” President Bill Clinton (Brit Whittle) along with ex-presidents George H.W. Bush (Mark Jacoby), Ronald Reagan (Steve Sheridan), Jimmy Carter (Martin L’Herault) and Gerald R. Ford (Jeff Steitzer). After pleasantries are exchanged, the fireworks explode. Past grievances with one another and the presidency itself, their political differences and choices they made come to the surface with gale-force intensity.

Five Presidents may have a “what if” premise, but it’s credible, thanks to Cleveland, who makes us believe these five presidents could have said what they did on this day by imbuing each man with the right quotes plucked from private moments in their lives.

When mounting a production featuring real-life characters there’s always that danger the characters will come across as cartoonish and not real. Director Mark Clements, who elicits performances from each actor that nail each president’s personality and exclude any physical gestures that would diminish the characterizations, avoids that danger here.

Amid the clashes and camaraderie, the humor and the stinging remarks, you begin to have sympathy for these men, and realize they’re only human, just like us, despite having held the highest office in the land.

And through it all, Five Presidents raises questions: What impact did Nixon’s legacy have on the presidency? What helped Nixon win the White House? How does the office of president of the United States bind men together of different ideologies? And believe it or not, who among these men did or didn’t ­­sleep with iconic movie stars?

Five Presidents is a delicious slice of American political history, served with equal amounts of humor and poignancy.

Both Sheridan and Cleveland have ties to Chicago: Sheridan is an alumnus of The Second City, where he wrote and acted in a string of hit shows; and Cleveland, the Emmy Award-winning writer whose TV credits include The West Wing and House of Cards, among others, is a Founding Member of American Blues Theatre, Chicago’s second oldest ensemble-based theater company.