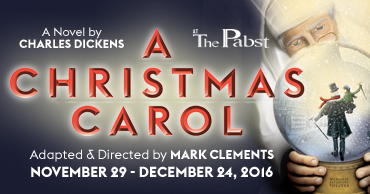 Milwaukee Rep is still accepting submissions for a new Tiny Tim and several other Young Performers roles.  Boys and girls of all ethnicities, ages 5 – 17, are encouraged to audition for the rare opportunity of performing alongside seasoned professionals in this Milwaukee Holiday tradition.  Submissions are due Monday, July 25.  For more information on how to submit your child for an audition please visit www.MilwaukeeRep.com

The A Christmas Carol One Day Sale on Monday, July 25 offers up to a 25% discount on all tickets when using promotional code SNOW.  Tickets can be purchased at www.MilwaukeeRep.com, by calling The Rep’s Ticket Office at 414-224-9490 or in-person at 108 East Wells Street in downtown Milwaukee. The Rep’s Ticket Office will be open from 9am to 6pm for the One Day Sale and the special pricing online will be available from 7am to 11:59pm. A Christmas Carol begins performances November 29 and runs through December 24 at the historic Pabst Theater.  A Christmas Carol is presented by Wells Fargo.

Milwaukee Rep is a nationally-recognized company that presents compelling dramas, powerful classics, award-winning contemporary works and full-scale musicals housed in its three unique performance venues – the Quadracci Powerhouse, Stiemke Studio and Stackner Cabaret. The Rep also produces an annual production of A Christmas Carol, featuring a World Premiere of a new adaptation in 2016, at the historic Pabst Theater.  Under the leadership of Artistic Director Mark Clements and Managing Director Chad Bauman,Milwaukee Repertory Theater ignites positive change in the cultural, social, and economic vitality of its community by creating world-class theater experiences that entertain, provoke, and inspire meaningful dialogue among an audience representative of Milwaukee’s rich diversity.