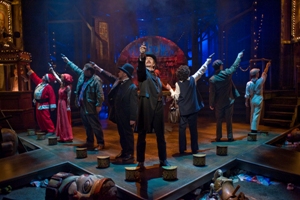 What drives a person to commit the most heinous of acts? Sometimes it is vengeance; sometimes it is jealousy; sometimes it is for other nefarious reasons. In Stephen Sondheim and John Weidman’s 1991 musical Assassins, the scope of the matter of murder is expounded exponentially as we delve into the minds of some of the world’s most famous killers (or almost killers). From President Lincoln to President Reagan, the hit and misses of the shooting of a President has made the ordinary infamous.

Assassins explores this infamy in a carnival-like setting. Sondheim and Weidman attempt to humanize the inhumane, with the end result being a brilliant discovery of the psychological mindset of a life gone astray. Whether it is John Wilkes Booth who saw his beloved country making a drastic readjustment under the leadership of Lincoln; or John Hinkley whose infatuation for actress Jodi Foster led to the near assassination of Ronald Reagan (and severe wounding of Jim Brady), the common rationale of the “act” is that of love. It can be love for our country or love for another person; but bottom line, it is how our brain deciphers and interprets love that can lead a person to leave all reason aside. 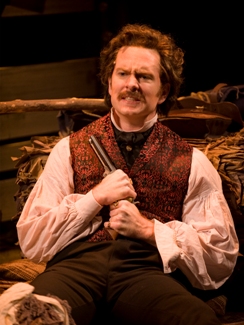 Since its inception, Assassins has always been a conflicted work and has gone through many rewrites and licensing ventures. What most theaters now stage (if they have the talent to stage it) is the 2004 Broadway incarnation which featured Neil Patrick Harris (The Balladeer/Lee Harvey Oswald) and Michael Cerveris (who won the Tony award for his portrayal as Booth). The production, as with most later Sondheim works, did well with critics but failed to connect with a mainstream audience, leaving it a rarely done theater piece.

Then along came Artistic Director Mark Clements and the Milwaukee Rep who has redefined this show resulting in the best staging of this work to date. Mr. Clements, who first saw Donmar Warehouse production, has restored the intimacy which was innate in the original concept. It is in this intimacy that we are allowed to feel compassion for the most hated of human beings who have ever breathed a breath on this Earth. Weidman’s book is also given new life through Clements’ intricate role study with his actors.

Adam Monley is an erstwhile John Wilkes Booth, who gives rhyme and reason for killing… oops…assassinating President Lincoln. As he faces his last moments, Booth wants the world to know the “why” behind his actions. His reasons for doing what he did could just as easily be heard in today’s Tea Party rallies. The same with Lee E. Ernst sensational interpretation of Samuel Byck, who attempted to take out President Nixon. His expose on the political culture of the early 1970’s is word for word the cry of a dysfunctional government we hear in the Occupy movements today.

As the play progresses, the audience is taken on a journey that is unlike any other theater experience you will encounter. Humor makes way for terror and terror makes way for tears as the absurd becomes reality when the gun is fired and a life is lost (or almost lost).

Mr. Clements has assembled a cast that rivals, then surpasses the 2004 Broadway production. Amongst those that elevate Milwaukee Rep’s incarnation is Chicago favorite Caroline O’Connor, who brought down the house in Gary Griffin’s “Follies” and does the same with her turn as Sara Jane Moore, the woman who almost took down President Ford. Ms. O’Connor is Ado Annie on meth and gives Assassins needed levity without sacrificing the veracity of the character she inhabits. As Lee Harvey Oswald and the Balladeer, Chris Peluso gives the most brilliant of performances. As the Balladeer, Mr. Peluso parallels the everyman character, breaking the fourth wall and allowing the audience into the psyche of the assassin. More than that, the Balladeer manipulates the audience akin to the character of Che in Evita, giving a pseudo-rational for the acts of the depraved. When Mr. Peluso inhabits Lee Harvey Oswald, we witness a metamorphosis of evil. Peluso’s angst is palpable and his onstage relationship with Mr. Monley’s Booth is fascinating to watch as we see the devil manipulate the weak.

Everything about Milwaukee Rep’s production is first rate. Todd Edward Ivins has designed a stunningly beautiful and functional landscape that rotates from a carnival setting to a very real cinema were we witness the most gruesome of assassinations projected to the nth degree. The set is expertly lit by Jeff Nellis which gives amazingly nuanced hues that add gravitas to the scenes. Alex Tecoma’s costumes are authentic and blend beautifully with the set surroundings. Moreover, Dan Kazemi’s musical direction is masterful and makes Sondheim’s very difficult score fly effortlessly through the actors and the orchestra. For those who are musically inclined, just take a gander at “The Ballad of Czolgosz” and “The Gun Song” and you will see the timing challenges of this complex score.

Mr. Clements’ production also brings to the forefront more current issues of fame, gun control and mental illness which proves that not much has changed over the last several hundred years. Why? Because the human condition remains the same. It is just more amplified now with modern day medical research and social networking. The bottom line is people do what they do to be noticed. Within that need to be noticed is a need to be loved. For that reason alone, we can relate, not to the act necessarily, but to the reason. That is why these assassins go the extra step that differentiates us from them.

Downtown Milwaukee has gone through quite an infrastructure transformation in the last five years. There are phenomenal new restaurants and a vibrant theater scene which rivals that of our great city. I dare say Milwaukee Rep steps it up a notch, even for those theaters in Chicago and New York. Mr. Clements has brought the British insight of specific character development to a Mid-west repertory company that does mostly American work and the result is some of the best theatre you will see in any country.