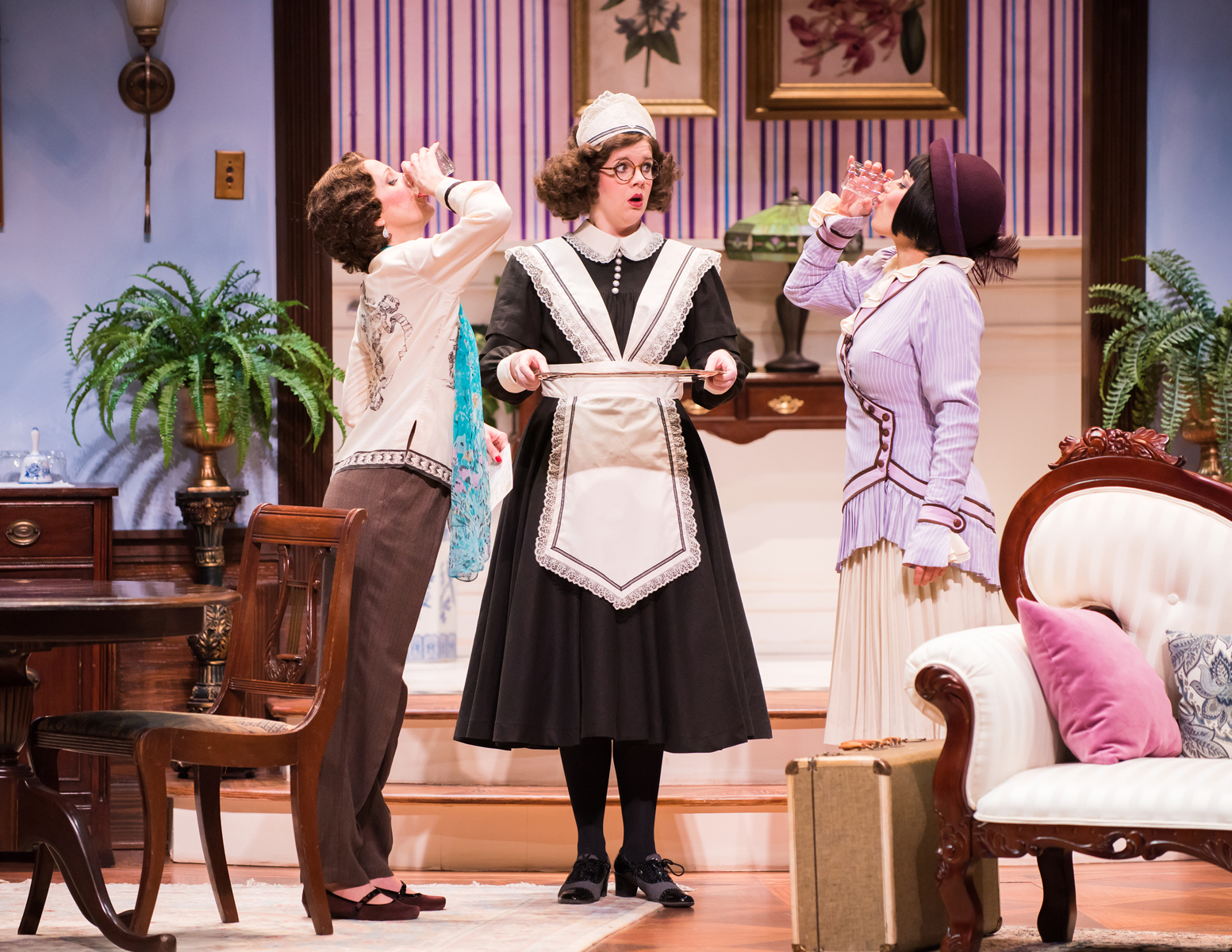 There are probably a lot of married couples out there that will realize at some point in their lives together that the love component of their marriage has turned sour.  On the surface, all seems well, but is it really?

Such is the basis for Fallen Angels, a clever drawing room comedy penned by the master of the genre,Noël Coward.  The Milwaukee Chamber Theatre is wrapping up its current season with Fallen Angels this spring.

In 1925 London, two women, Julia and Jane, are best friends and happily married to their husbands – Julia to Fred and Jane to Willy.  Both women, however, freely admit the love part of their respective marriages is dead.  Passions and ecstasy have subsided and boredom has set in.  Says Julia: “It’s unfair that men have the monopoly on wild oats.”

But after their husbands embark together on a golf outing, the ladies’ lives suddenly grow interesting when they learn that an old flame, Maurice – a flame that hasn’t extinguished in either lady – wants to pay them a visit.  The waiting game that ensues in anticipation of Maurice’s impending arrival is hilarious – and breathes much needed life into a play that starts off slow, deadly slow, to be exact, butgrows more zany and biting with every turn of the twisted plot.  The clever conclusion that ensnares Julia, Fred, Jane and Willy, and Maurice, too, makes Fallen Angels a delicious piece of theater.

A cast of Milwaukee theater veterans gives Fallen Angels its sparkle and shine.  Kay Allmand as bored wife Julia and Beth Mulkerron as bored wife Jane demonstrate an uncanny knack for comedic timing, particularly as they spar over the dining table while waiting for lover boy Maurice to show up.  Matt Koester excels in the brief but crucial role of Maurice, making the character memorable.  But the real showstopper is Molly Rhode, in the high-energy supporting role of Saunders, Julia’s efficient maid.  Rhode brings down the house with her spirited rendition of “Let’s Misbehave,” one of several musical interludes sprinkled into the high jinks of Fallen Angels.

Rick Pendzich as Julia’s husband Fred, and Chase Stoeger as Jane’s hubby Willy do their duty as foils for their wives’ madcap antics.

But in order for Fallen Angels to enthrall an audience with its razor-sharp wit, Coward’s play leans heavily on the actresses playing the juicy roles of Julia, Jane and Saunders.  Thankfully, Allmand, Mulkerron and Rhode rise to the challenges presented by their respective roles and make this production of Fallen Angels work.

Uproarious and witty, Fallen Angels is the perfect way to escape the rigors of everyday life and wile away a spring afternoon or evening.

C. Michael Wright directs Fallen Angels. Wright is a veteran of Wisconsin theater who has helmed more than 75 productions, and for 39 years has acted professionally, and has appeared on Broadway, in Israel and in regional theatres across the country.

Fallen Angels runs through May 1 in the quaint Cabot Theatre of the Broadway Theatre Center, 158 N. Broadway, in Milwaukee’s Historic Third Ward district.  Tickets can be purchased at the box office,by phone at (414) 291-7800, or online 24 hours a day by visiting milwaukeechambertheatre.com. Photos by Paul Ruffolo.