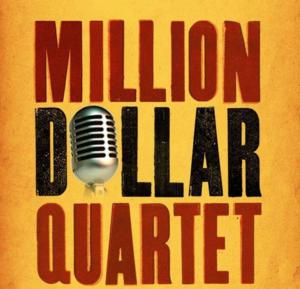 Million Dollar Quartet, the longest-running Broadway musical production in Chicago’s history, will celebrate its 2500th performance in Chicago on Saturday, September 20. To mark the occasion, the cast will play a free outdoor concert in Daley Plaza during the Farmer’s Market on Thursday, September 18 at noon.

Million Dollar Quartet has been extended through January 4, 2015. With almost 2,500 performances and entering its 7th smash year in Chicago, the Tony Award-winning rock ‘n’ roll musical holds the record for the longest-running Broadway musical in Chicago.

Producer Gigi Pritzker comments, “Since the very beginning, Chicago has wholeheartedly embraced Million Dollar Quartet, making us the longest-running Broadway musical in the city’s history, and we are grateful for the continued and enthusiastic support of our home town audiences. It’s been a hit in Chicago, New York, London, Japan, Las Vegas and on the national tour. The show remains as exciting and engaging as always-partially due to the more than 20 rock ‘n’ roll hits in the show and the tremendous talent on stage.”

On December 4, 1956, an auspicious twist of fate brought Johnny Cash, Jerry Lee Lewis, Carl Perkinsand Elvis Presley together. The place was Sun Records’ storefront studio in Memphis. The man who made it happen was Sam Phillips, the “Father of Rock ‘n’ Roll,” who discovered them all. The four legends-to-be united for the only time in their careers for an impromptu recording that has come to be known as one of the greatest rock jam sessions of all time.

Million Dollar Quartet features a treasure trove of the greatest rock ‘n’ roll, gospel, R&B and country hits from these music legends, including “Blue Suede Shoes,” “Fever,” “Sixteen Tons,” “Who Do You Love?,” “Great Balls of Fire,” “Ring of Fire,” “Whole Lotta’ Shakin’ Goin’ On,” “Folsom Prison Blues,” “I Walk the Line,” and “Hound Dog.” Million Dollar Quartet captures the infectious spirit, freewheeling excitement and thrilling sounds of a singular moment when four of the music industry’s most extraordinary talents, all in their creative prime, came together for one of the most memorable nights in music history.

Million Dollar Quartet had its world premiere at Florida’s Seaside Music Theatre, and was subsequently staged at the Village Theatre in Washington, breaking box office records. In Chicago, the production moved to the Apollo on November 5, 2008, following its sold-out, limited engagement at the Goodman’s Owen Theatre. The Broadway production garnered three Tony Award nominations, including Best Musical, Best Book of a Musical and Best Featured Actor in a Musical, Levi Kreis; three Drama League Award nominations; and an Outer Critics Circle Award nomination. Million Dollar Quartet is the longest-running production in Chicago’s history and is also currently playing in Las Vegas and on tour.

Rush student tickets for select performances (Wed-Fri and Sun evenings only) are available 2 hours prior to curtain at the box office with valid Student ID. Student rush tickets are subject to availability.

Million Dollar Quartet will offer special family discounts on select Sundays. Family nights have extended through the season; performances are October 12 and November 9 at 6:30 p.m.

Million Dollar Quartet is a 90-minute, family-friendly production. Audience members of all ages are invited to laugh, clap-and even dance-during the show.