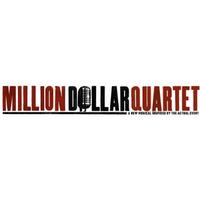 The Chicago production continues to break box office records at the Apollo Theater, 2540 N. Lincoln Ave., Chicago.  Tickets are on sale through January 6, 2013 at the Apollo box office, phone (773) 935-6100, and online through Ticketmaster,www.ticketmaster.com.   For more information, visit www.milliondollarquartetlive.com.

Producer Gigi Pritzker comments, “Million Dollar Quartet has been a hit in Chicago, New York, London, and on its national tour. Million Dollar Quartet remains as fresh, energetic and engaging as always—partially due to the more than 20 rock ‘n’ roll hits in the show and the tremendous talent on stage.  We are thrilled to open this new block of tickets for sale and we are grateful for the continued support of Chicago audiences.”