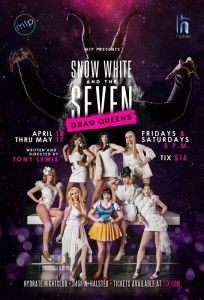 Celebrating its Fifth Anniversary, “Snow White and the Seven Drag Queens ” returns to Hydrate Nightclub with an all-new revival production! Friday and Saturday Nights, April 18 through May 17

Five years ago, MidTangent Productions (MTP) collaborated with Hydrate Nightclub to become the first theater company to produce a play on their stage. “Snow White and the Seven Drag Queens” played to sold-out houses for two consecutive runs. Since then, MidTangent Productions and Hydrate have worked together to put the “fairy” back into fairy tales with seven additional shows, including the hits “Twinkie and the Beast,” “Alex in Wonderland,” and “Snow White and the Drag Queen Who Stole X-Mas.”

With the recent rise in appreciation for drag culture, with special thanks to mainstream entertainment such as RuPaul’s Drag Race, MTP felt 2014 to be the perfect time to revive the show that started off our great journey with Hydrate Nightclub Chicago. With a phenomenal new cast, script and music, we promise a triumphant revival for all to see.

Follow Snow White and the Seven Queens as they sing live through this high speed, two-act, jukebox musical parody!

Tickets: $15 – available at the door or at www.tix.com