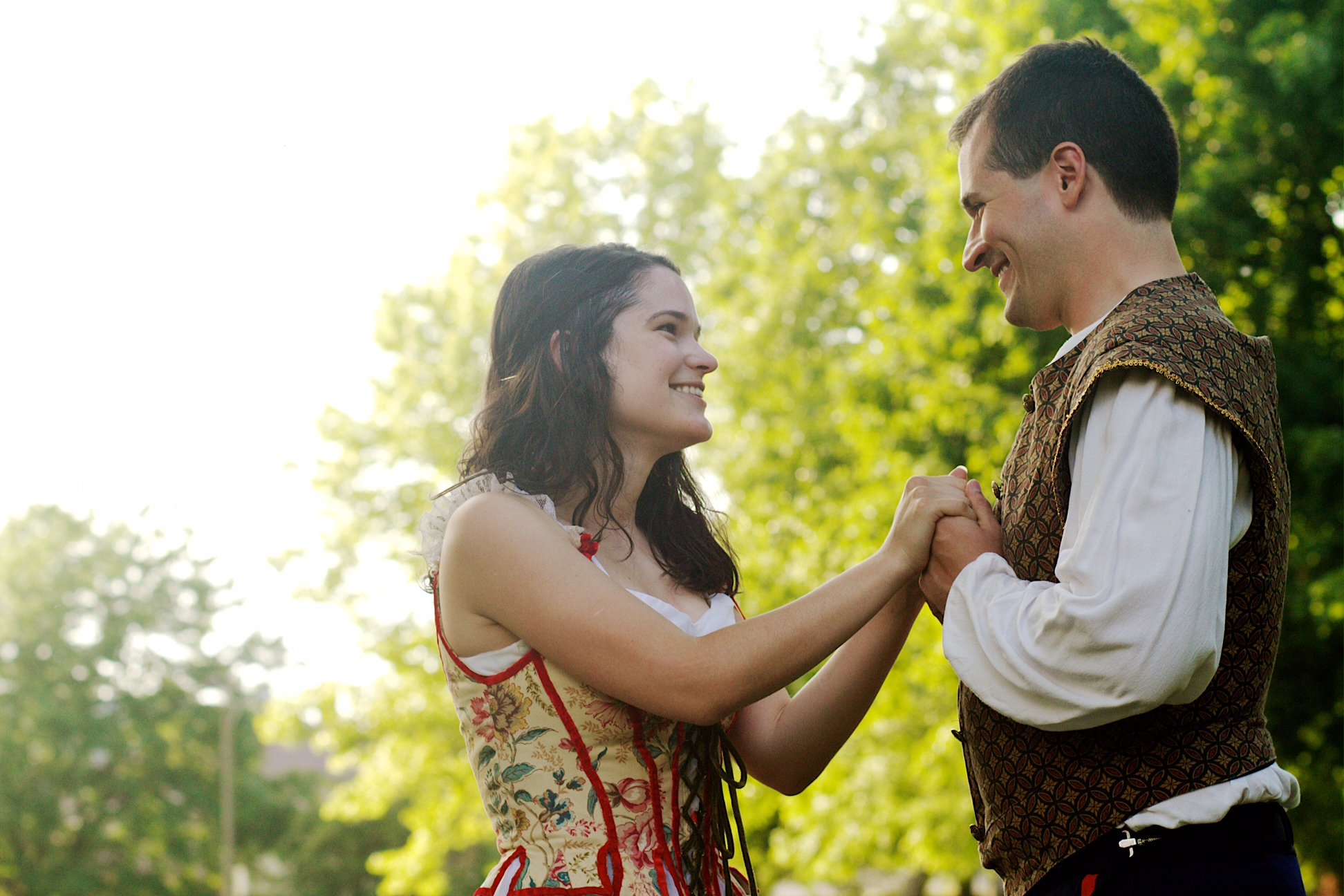 This time of year there are many productions of Shakespeare in the Parks throughout Chicagoland. Some are well done and entertaining and others leave much to be desired. Shakespeare is not easy to pull off well. Even the well-established Chicago theatres have spotty track records with it.

In my opinion when Shakespeare’s works are set in other eras there is a big clash between the language and time period. True his themes are universal and stories great and nothing comes near the beauty of his language but they are from a distinct time and place in history and for us to believe and enjoy them fully they work best in Elizabethan costume with swords instead of machine guns. Midsommer wisely chooses to present it in the dress and times of the Elizabethan age, therefore we see it much in the style that it would have been presented in Shakespeare’s day.

Midsommer Flight has been performing his plays in different parks throughout Chicago since 2012 and if their current production of Much Ado About Nothing is any indicator, this is a company with a strong vision, great artistic direction and some strong actors who are at ease with the language, possess excellent diction and understanding of the text and excel at the art of story-telling

Much Ado About Nothing is one of Shakespeare’s greatest comedies centered around the classic characters of Benedick and Beatrice (both played with matched skill and strong chemistry by Martel Manning and Ashlee Edgemon), two clever and witty people who secretly love one another but fight like a brother and sister and denounce the institution of marriage. Combined with this story is that of Claudio and Hero (strong performances by Adam Habben and  Vivian Knouse), two young people madly in love with one another and planning marriage until the villain of the piece, Don John (suitably cast Frank Sawa) sets up a scene where his right hand man Borachio (the handsome and dashing Jason Markoff) goes to Hero’s window in the middle of the night before the wedding day and woos Margaret (Meredith Ernst) who is disguised as Hero. They bring Claudio to witness this scene and, the next day, at the wedding he shames Hero by calling her a whore in front of everyone. He storms off, Hero faints and her Uncle Leonato (Scot Olsen) spreads the rumor that she has died of her shame and Claudio is to blame.

There is a third plot as well, that of the town Night watchmen Dogberry (played by the miscast Jared Dennis who is a tad too young for this role and lacking some of the comic wordplay mastery to make it fire on all cylinders) and his watch, First Watchman (Glen Garrabant), George Seacole (Meg Harkins) and Balthazar (Hugh Oatcake). Dogberry and his right hand “man” Verges (played by the wonderful comedienne Christina Renee Jones) manage to capture all of the conspirators and all is revealed at the end. The entire cast of 19 is uniformly strong and the music by Elizabeth Rentfro well done and in the spirit of the piece. What makes this production successful is the chemistry and ensemble work of the players.

Having seen many productions of Much Ado in my theatrical life I understand the skill needed to fully realize its power, humor and pathos. Director Beth Wolf has done a fine job with staging the piece and getting some really great comic performances out of the actors. My one main criticism of Midsommer’s production is that it lacked complexity and depth of emotion in the dramatic scenes. I felt that much was played on one level. After all we are dealing with betrayal which is a strong combination of emotions. Much of the time I felt that the actors were scraping the surface and did not delve into the darker and more painful regions of the human psyche. When Hero is denounced as a whore in front of the whole town we need to see the full devastation of a young, innocent girl being destroyed and the toll it takes on Claudio who still loves her. Anger is the easiest emotion for an actor to play. It takes great skill and courage to delve deeper and provides the layers that are underneath. I understand that this can be challenging in an open space where many of the lines are shouted in order to be heard but if they can achieve the level of pain (physically and emotionally) that I am describing it will knock the wind out of the audience (I have seen it played where all of the women were keening and rocking on the floor in agony when Hero is denounced and it had people stunned and in tears). Many directors and actors fall into the trap of not playing Shakespeare’s comedies with the strong tragic underpinnings that provide the rich texture of his work.

However, Beth Wolf and Midsommer Flight’s Much Ado about Nothing is highly entertaining and people should flock to see the magic that is created by this talented group through poetic language, superb story-telling and strong direction and acting.

Admission is free to the public but donations are welcomed. It plays Saturdays at 6:00pm and Sundays at 2:00 at Schreiber Park July 19-20 and 26-27, Gross Park August 2-3 and 9-10 and Toughy Park August 16-17 and 23-24. The play runs 95 minutes without an intermission. Bring your own chairs, blankets and food and umbrella for shade.