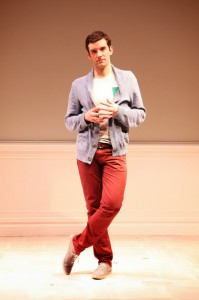 At first glance you may think that Buyer and Cellar is merely about the eccentricities of superstardom.  After all, Jonathan Tolin’s one-man comedy about an out of work actor who finds work as the lone employee curating the subterranean mall located in Barbra Streisand’s Malibu compound, is as unique as the diva herself.  But when dissected, this play is a mulit-layered masterpiece that brilliantly explores the human condition.  Directed by Stephen Brackett, Buyer and Cellar became instant hit when it opened last year at New York’s Rattlestick Theatre and has garnered two major awards for its star, Michael Urie who brings the play to the Broadway Playhouse for a limited run with a powerhouse performance that is utterly transforming.

The idea for Tolin’s play came after reading Streisand’s 2010 decorating coffee table book “My Passion For Design where instead of using closets or bins to store her collectables, Babs built a European arcade of row shops in the sub-level of her barn, including an antique store, doll shop, sweet shop and vintage clothing shop.   In the play, Urie’s character of Alex More who was just fired as the Mayor of Toontown, is hired to take care of the shoppes and greet the mall’s only customer.

Throughout the ninty-minute work, Mr. Urie masterfully narrates the story then begins inhabiting the different characters that affect each other in profound ways.   The initial interaction between Alex and his employer is hysterical as she tries to barter for “FiFi” the doll whose backstory he instantly creates.  As both begin to get to know each other, a tacit bond of trust starts to form as they each understand the loneliness and isolation the other is feeling.   Streisand’s outwardly eccentric nature is subtly explained in her conversations at the different mall shops as she teaches Alex that life is in the details.

In the wrong hands, Buyer and Cellar can become something that playwright did not intend.  Instead, the triad of actor, director and writer treat the diva with utmost respect.  Urie’s Streisand is not so much an imitation but an in-context recreation, with a deep voice and slanted body position (think of a Cher impersonator who got kicked hard in the nuts) allowing Mr. Urie to deliver lines with agile comedic timing and more dramatic lines with poignant truth.

Buyer and Cellar is not only a triumph for Michael Urie as a performer but in a way for Streisand herself as the play makes someone knowingly eccentric to the masses become emotionally relatable to the audience.  Babs teaches not only Alex but all of us a life lesson that we should all demand a little more perfection and care about the details, not in a material way, but in living life itself.