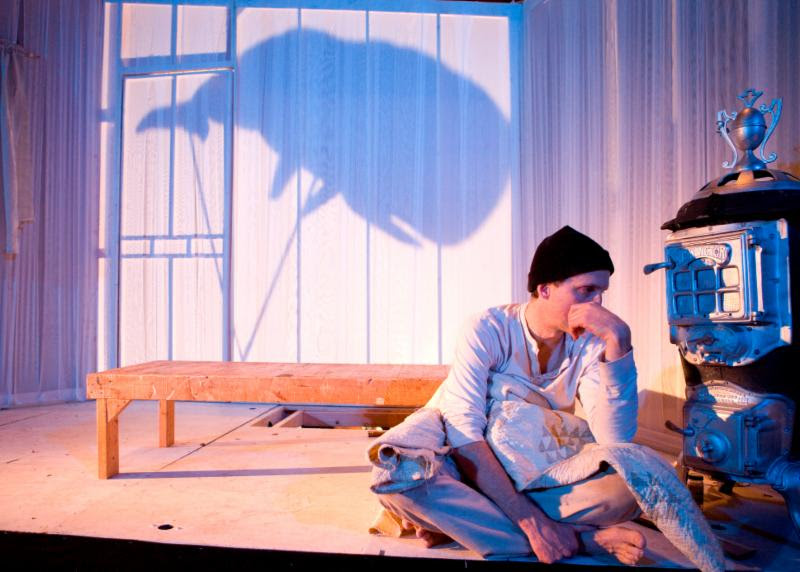 Blair Thomas’s Moby Dick is a cautionary talk where the search for purification, fueled by hubris and righteousness, leads to self-destruction and tragedy. Thomas has assembled a quartet of male performers and cast them as members of a monastic order of ancient mariners descended from Ishmael, the narrator of Melville’s Moby Dick. The mariners tell the story using metaphor and ambiguity rather than a conventional narrative of this epic book.
Blair Thomas started his first puppet company at age ten in Jacksonville, Alabama; studied at the Oberlin Conservatory of Music; and is a graduate of Oberlin College. He co-founded Redmoon Theater in 1989, serving as artistic director in the creation of productions, parades, and pageants. He has received two international UNIMA awards for excellence in puppetry and has twice been awarded the Illinois Arts Council Fellowship. He was the first Jim Henson Artist-in-Residence at the University of Maryland and is an adjunct faculty member at the School of the Art Institute of Chicago. Under his leadership, Blair Thomas & Co. has produced 15 works over its 13-year history. MCA Stage has presented his works The Ox-Herder’s Tale and Pierrot Lunaire: A Cabaret Opera.
Michael Smith is a singer/songwriter who has performed at major folk festivals including Kerrville, Black Mountain Festival, Philadelphia, Owen Sound, and Winnipeg. His catalogue includes scores for theatrical productions, notably Steppenwolf’s Tony-winning production of John Steinbeck’s The Grapes of Wrath.
Michael Zerang is a composer/percussionist who has collaborated on free-jazz, experimental, noise, and world-music projects, working with Peter Brötzmann Chicago Tentet, Joe McPhee, and Hamid Drake. He has been collaborating with Blair Thomas since 1991.
Michael Montengro is a solo puppet artist and collaborator with a range of theater groups including Lookingglass Theatre, Next Theater, and Wrtier’s Theater with The Puppetmaster of Lodz, which garnered a Jeff Award for Puppet Design. He also leads own company, Theatre Zarko: Puppet Symbolist Theatre.
Greg Allen is the founding director of The Neo-Futurists and creator of full-length Neo-Futurist productions. He has written, directed, and performed his original work for theater companies throughout Chicago and nationally.
John Boesche creates scenic design for theater, dance, and opera, and is particularly known for his projection designs. His designs have been seen throughout the US, including at the Goodman Theatre, Chicago Shakespeare Theater, Lookingglass Theatre, and Steppenwolf Theatre.
TICKET INFORMATION
Moby Dick takes place March 31 through April 2 at 7:30 pm and April 3 at 3:30 pm. Tickets are $30 and available at the MCA Box Office at 312.397.4010 or www.mcachicago.org. The performance runs approximately two hours with no intermission.