The Museum of Contemporary Art presents Burnt Sugar the Arkestra Chamber for their Chicago debut. The revisionist ensemble performs the soundtrack to Sweet Sweetback’s Baadasssss Song, the film odyssey by actor/director/composer Melvin Van Peebles. Shot in 1971, the film grew to be one of the top-grossing releases of the year, kick-starting the 1970s genre known as Blaxploitation. The soundtrack, recorded by the then-unknown Earth, Wind & Fire, and composed by Van Peebles, alternates hymn-based vocals and jazz rhythms, creating a sound that prefigured sampling in hip hop.  Burnt Sugar the Arkestra Chamber is curated by Yolanda Cesta Cursach and takes place September 17 in the MCA’s Edlis Neeson Theater.
Burnt Sugar Arkestra was conceived in 1999 by Greg Tate as a forum for improvisational musicians to compose, record, and perform materials that reflect the breadth and depth of American diaspora music in the twenty-first century. Co-led by bassist Jared Michael Nickerson, the group employs Butch Morris’s revolutionary conduction system, described as an improvised duet for ensemble and conductor. They use a vocabulary of gestures and signals to exchange tempo and musical ideas. The resulting performance is a new interpretation of its constituted parts. 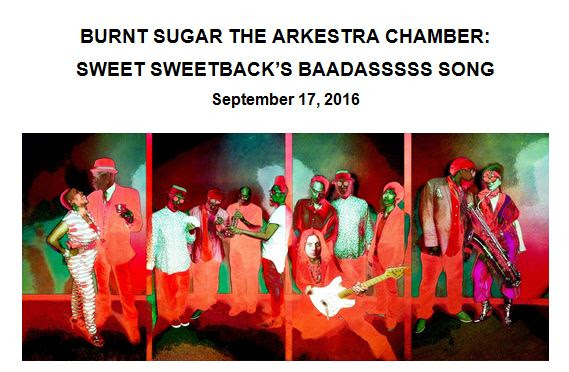 MCA presents the concert of Melvin Van Peebles’ soundtrack in conjunction with Kerry James Marshall: Mastry, informed by a shared mission to address black culture in America. Van Peebles was a Chicago native and prolific director, screenwriter, playwright, novelist, and composer. His acclaimed independent film Sweet Sweetback’s Baadasssss Song, about the life of an African-American man on the run from white authority, heralded a new era of black films.
The performance of Sweet Sweetback’s Baadasssss Song runs 120 minutes, with one intermission. Chicago soul singer Jamila Woods opens the concert.
TICKET INFORMATION
Burnt Sugar the Arkestra Chamber: Sweet Sweetback’s Baadasssss Song takes place September 17 at 7:30 pm on the MCA Stage. Tickets are $20, and they are available at the MCA Box Office at 312.397.4010 or www.mcachicago.org.
Lead support for the 2016-17 season of MCA Stage is provided by Elizabeth A. Liebman. Generous support for MCA Dance is provided by David Herro and Jay Franke. Additional generous support is provided by Caryn and King Harris, Shawn M. Donnelley and Christopher M. Kelly, and Lois and Steve Eisen and the Eisen Family Foundation. The MCA is a proud member of the Museums in the Park and receives major support from the Chicago Park District. Season support is provided by Alphawood Foundation. MCA Stage is a proud partner of the National Performance Network.
The Museum of Contemporary Art Chicago is a nonprofit, tax-exempt organization accredited by the American Alliance of Museums. The museum is generously supported by its Board of Trustees; individual and corporate members; private and corporate foundations, including the John D. and Catherine T. MacArthur Foundation; and government agencies, including the Illinois Arts Council, a state agency, and the City of Chicago Department of Cultural Affairs and Special Events. Museum capital improvements are supported by a Public Museum Capital Grant from the Illinois Department of Natural Resources. The MCA is a proud member of Museums in the Park and receives major support from the Chicago Park District.
The MCA is located at 220 E. Chicago Avenue, one block east of Michigan Avenue. The museum and sculpture garden are open Wednesday through Sunday from 10 am to 5 pm and Tuesday from 10 am to 8 pm. The museum is closed on Monday.  Tuesdays are Community Free Days with free admission for Illinois residents.  Suggested general admission is $12 for adults and $7 for students and seniors. Children 12 years of age and under, MCA members, and members of the military are admitted free. Information about MCA exhibitions, programs, and special events is available on the MCA website atmcachicago.org or by phone at 312.280.2660.