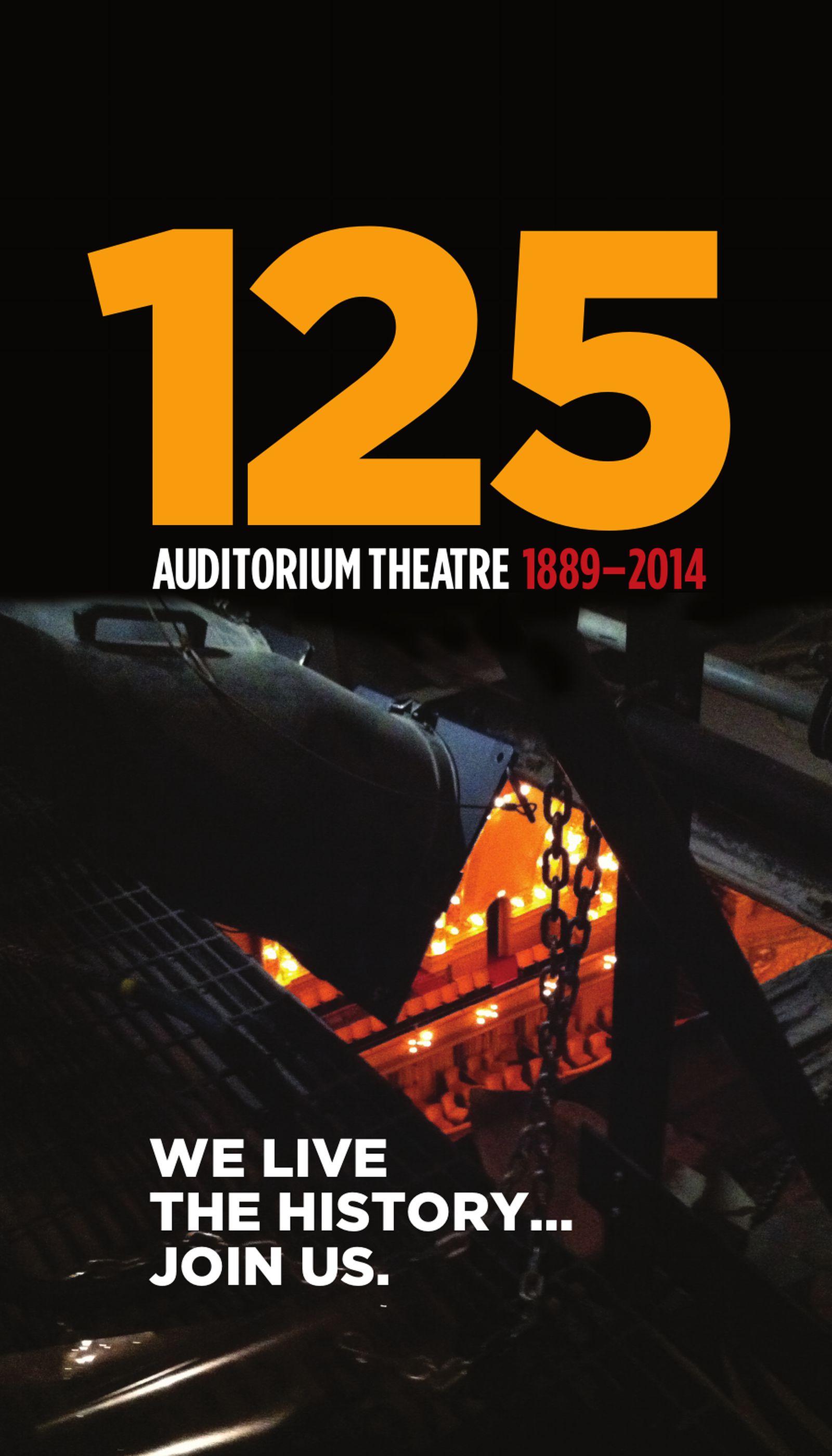 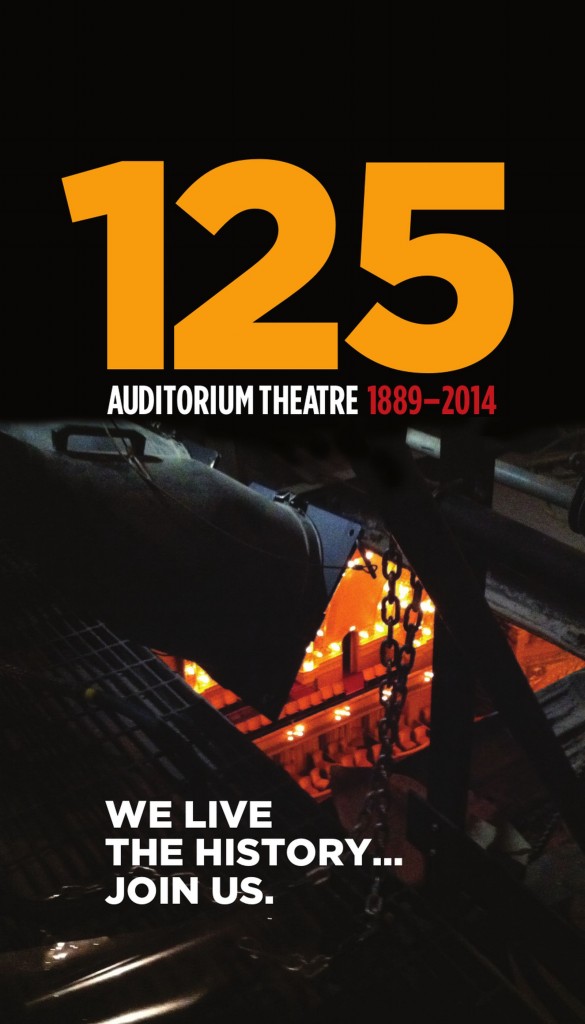 “On behalf of all Chicagoans, we are thrilled to celebrate the Auditorium Theatre’s 125th birthday,” said Mayor Emanuel. “This national historic landmark is representative of our rich history in the arts as well as the unique Chicago architecture styles that have influenced American building structures for generations. The Auditorium Theatre continues to make Chicago a leader in the arts and culture today, and I wish the theatre nothing but good fortunes in the coming years.”

Spreading the birthday cheer, the “125th Birthday Trolley,” generously provided by Chicago Trolley & Double Decker Co., will travel throughout the City on the morning of December 9. Passengers, including Board Chairman Mel Katten and Executive Director Brett Batterson, members from the “Too Hot to Handel” Chorus, Auditorium Theatre staff and board members and other surprise guests, will distribute special birthday treats to commuters in various locations including Union Station, Daley Plaza, State and Lake and Pioneer Court. As a special 125th birthday gift to Chicagoans, 125 pairs of tickets to one of the Auditorium’s upcoming performances in its 125th Anniversary Season will be given away throughout the morning.

In addition, the Auditorium Theatre’s Preferred Restaurant Partners join the fun with these special Birthday specials throughout the day:

Trattoria No. 10 (10 N Dearborn) will give away gift cards, and Lockwood (17 E Monroe) will hand out 15% off coupons on the Birthday Trolley. Brasserie by LM (800 S Michigan) offers an “All You Can Eat” Mussel Special ($15/person) while Tesori (65 E Adams) will offer the “Sparkling Orchard” specialty cocktail for $12 in honor of the theatre’s 125th Birthday.

The Birthday celebration continues into the evening as the Auditorium Theatre commemorates the opening night of the theatre 125 years ago with a special performance, “Living the History – 125 Years of the Auditorium Theatre.” The celebratory evening will include a tribute to the diverse entertainment that has been, and continues to be presented at the theatre including symphonic music, opera, Broadway musicals, rock music and dance.

Paying homage to the past, present and future of the Auditorium and its Chicago roots, the evening’s host, Chicago actor John Mahoney, will welcome friends old and new to the stage. Broadway legend Patti LuPone, whose great-grand aunt Adelina Patti sang on the very same stage at the original grand opening, will delight guests with show-stopping numbers throughout the evening. A performance by the Apollo Chorus of Chicago, which also performed at the 1889 opening, will regale the audience with a rousing rendition of “Do You Hear the People Sing?” from the iconic musical “Les Misérables”, a Broadway masterpiece that has been performed numerous times at the Auditorium. Chicago’s premier cultural institutions, including members of the Chicago Symphony Orchestra Brass and singers Hlengiwe Mkhwanazi and Eric Owens from the Lyric Opera of Chicago (performing in the Lyric’s upcoming production of “Porgy and Bess”) perform, paying tribute to the stage that was built as Chicago’s home for classical music. Also paying tribute to the world-renowned dance that has graced the stage in recent years, dancers Christine Rocas and Rory Hohenstein from The Joffrey Ballet—which has made its home at the Auditorium for the past 16 years—will perform the iconic balcony scene from “Romeo and Juliet,” andAlvin Ailey American Dance Theater will present a special performance by Chicago native Vernard Gilmore.

Recognizing the astounding rock shows that filled and continues to fill the 3,875 seats of the Auditorium—and have launched the careers of some of the most acclaimed performers in history—the “Chicago All-Star Rock Band” will have guests up on their feet and dancing in the aisles. Made up of legendary Chicago musicians including Jim Peterik (Ides of March and Survivor) on guitar and vocals, Barbara Unger-Wertico (The Buckinghams) on keyboard, Richard Patterson (Miles Davis and Michael McDonald) on bass and Paul Wertico (Pat Metheny Group and Larry Coryell Power Trio) on drums, the “All-Star” band will turn the Auditorium into a full-fledged rock concert, complete with hometown favorite “Sweet Home Chicago.”

The Pasquinelli Family Foundation is the Gala Dinner Celebration Sponsor.

The Auditorium Theatre of Roosevelt University, located at 50 E Congress Pkwy, is an Illinois, not-for-profit organization committed to presenting the finest in international, cultural, community and educational programming to Chicago, and to the continued restoration and preservation of the National Historic Landmark Auditorium Theatre. In September of 2014, the Auditorium Theatre was awarded the inaugural Fifth Star Award by Mayor Rahm Emanuel and the Chicago Department of Cultural Affairs and Special Events. The Auditorium Theatre is generously supported by the MacArthur Foundation, the Illinois Arts Council, the Sage Foundation, and the Palmer House Hilton. For more information about programming, volunteer and donor opportunities or theatre tours, call (312) 341-2310 or visit AuditoriumTheatre.org.