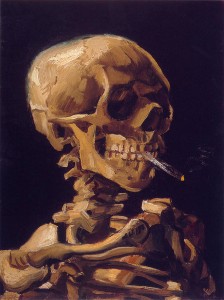 Commedia Beauregard, a Chicago-based non-profit theater company, has announced the premiere of Master Works: The Van Gogh Plays, a festival of short plays based on works by Vincent Van Gogh, at Raven Theatre from May 2 to 5.

Stabbings, weddings, manifestos, and a post-apocalyptic wasteland. These are a few things that happen when Commedia Beauregard’s Master Works series once again brings fine art to life. This time six Van Gogh paintings were chosen: Night Cafe, The Man is at Sea, Skull with Burning Cigarette, Undergrowth with Two Figures, Doctor Gachet, and The Drinkers (which can be seen at the Art Institute of Chicago). Six locally & nationally recognized Chicago playwrights then brought their imaginations to bear and created an original play based on the painting they were assigned. Finally, Commedia Beauregard chose six up-and-coming directors to take these new works and bring them to life on stage. Now see these short plays presented together back-to-back in Master Works: The Van Gogh Plays. Like the great painter himself, it promises to be an inspiring blend of genius and insanity!

“Work with adaptation always begins with thorough investigation of the source material,” said playwright Jason Lindner. “I study it and roll it over in my fists – particularly what emotion it invokes in me. Then I make sure to throw it away – hard –  before I get obsessed with it. Becoming lost in the details of a source is a sure fire way to deflate your play possibilities. When drawing from a painting, for example, you may choose to write something based exactly on the scene as it is presented – name the subjects and create a scenario for their placement, but to me that is limiting. I am far more interested in the emotion that the scene creates and what it turns over within the bacterial fage of my gut.”

“For me, translating a painting into a play felt like free association while staring at a ‘Magic Eye,'” said playwright Alberto Mendoza. “Then, after looking long enough, closing my eyes and telling a story about the afterimage. I knew my first instinct would be to tell the story of the painting, posit what Van Gogh intended, and knew that would be a waste of an opportunity. I made sure to get out all of my first thoughts, find the common themes, and then throw everything else away. This experience reminded me that adaptation is at the root of every piece of art and that ‘original’ should always appear in quotations.”

According to Mexican poet Octavio Paz, “Translation is an art of analogy, the art of finding correspondences,” and Master Works is one more way in which Commedia Beauregard follows its mission of exploring cultures through the art of translation.

Ellen Cribbs is an award-winning playwright who has been writing plays since the tender age of 12. Her one-act comedy, Waiting for James, was published by Baker’s Plays when Ellen was a teenager, and is now available from Samuel French, Inc.  She has written, directed, and produced three of her plays for the Edinburgh Fringe Festival in Scotland, which led to her play, I Love You! And You… And You… to be adapted into a film titled Mark of Love (available on Netflix and DVD). Currently, her play Voices in the Dark is being turned into a film in Chicago. Having written a piece for the Master Works series last year, she is excited to return with a new art-inspired play!

Christopher Kidder-Mostrom founded Commedia Beauregard in Saint Paul, MN, in 1999. He relocated the company to Chicago in 2010.  His play A Klingon Christmas Carol has been produced here every year since.  Chris received a BA in Theatre Arts and Political Science from Morningside College, and his MFA in Playwriting from the University of New Orleans. An award-winning playwright, Chris’s plays have been seen in New York, Chicago, the Twin Cities, and throughout the Midwest. As an actor and director, Chris has worked at such places as Pillsbury House Theatre, History Theatre, Children’s Theatre Company, and Theatre de la Jeune Lune. He is a proud member of the Playwrights Center, the Dramatists Guild of America, and the American Literary Translator’s Association.

Rory Leahy was born and raised in Evanston, Illinois and currently lives in its suburb, Chicago. He is the Artistic Director of the American Demigods Theatre company which has produced many of his plays, including The Irrelevant Adventures of Jarvis McFadden and The Factory That Makes Devils. His plays have been produced by various other companies in Chicago, Miami, St. Louis and New York City. Most recently, his short play He’s Really A Great Guy was selected for publication in THE BEST TEN MINUTE PLAYS OF 2013 from Smith and Kraus.

Jason Lindner received his MFA in Playwriting from Yale in ’02 and has had award-winning work produced in New York, Chicago, L.A., and across the country. Recently, his work, The Gog/Magog Project was even seen in the U.K. Jason lived in New York City for close to ten years and there had plays performed at The Public Theatre, Soho Rep, HERE, La Mama, and many other venues. His adaptation ofFrankenstein, created with the Lecoq based troupe The Flying Machine, toured for several years and was nominated for four Drama Desk awards. He recently moved to Chicago where his work has been produced at Stage Left, The Chopin, Steep, and several other Chicago theaters.

Alberto Mendoza is a co-founder of the experimental theatre collective Abraham Werewolf and Marketing Director/Contributing Artist of Broad Shoulders Productions. Alberto would like to thank Christopher Kidder-Mostrom, Kevin Alves, Commedia Beauregard, and all of his fellow artists/troopers for this exciting opportunity.

Sean Margaret Wagner is from Minneapolis, MN where clinical studies at 3M proved her to be the most brightly packaged, environmentally friendly, and cost effective playwright & musical bookwriter/lyricist available in her price range. You can find Sean wherever quality theatrics are sold (Chicago Dramatists, Midwest New Musicals, Commedia Beauregard). Varieties include Shakespearean spoof(MacBlank) and Midwestern funeral etiquette (Eat, Mourners). Keep your eyes on the shelves for Common Cuckoo, a new musical for young audiences.

Niki Dreistadt is excited to participate in her first Directing project in Chicago.  Favorite Directing Credits include Mr. Marmalade (Noah Haidle) at the University of Colorado-Boulder, Taxi Tales (Leonard Melfi) with the Onstage Fringe Festival, and Krapp’s Last Tape (Samuel Beckett) with the Onstage Fringe Festival. Recent Assistant Directing credits include the Colorado chapter of 44 Plays for 44 Presidents(The Neofuturists) with Square Product Theatre and Bug (Tracy Letts) with Devil’s Thumb Productions and Chronic Malcontents (Curtis Powell) with Endpoint Theatre. Niki also works as a stage manager with Kalamazoo-based travelling circus Stand Up 8. She is a writer and performer with local sketch comedy group Side Effects, recently showcased at the Chicago Sketch Comedy Festival and Toronto Sketch Comedy Festival.

Celia Forrest last collaborated with Commedia Beauregard as the assistant director for Corleone, and has previously stage managed the Chicago debut of A Klingon Christmas Carol. Celia studied theater at Macalester College in Minnesota and spent five years working for Stages Theatre Company as a resident artist, actress, stage manager and teacher. She is a producer for Democracy Burlesque, Chicago’s longest running political sketch comedy troupe.

Toma Tavares Langston is a Chicago based Stage Director-Producer and a native of Flint, MI. Toma is in training at the World Coach Institute to become an ICF certified Creativity and Life Coach. Recent credits include: Rebekah Theater Project’s The Shadow Box by Michael Cristofer at the West Stage Raven Theater, Another Production Company’s The Last Five Years by Jason Robert Brown. He is a proud participant of DirectorsLab Chicago 2012. InnateVolution Theater Production credits include: Edward Albee’s The Zoo Story/The Sandbox, April Smallwood’s Right As Rain (World Premiere), Ntozake Shange’s For Colored Girls Who Have Considered Suicide When The Rainbow is Enuf, Adrift In Macao Book and Lyrics Christopher Durang & Music Peter Melnick (Chicago Premiere), The 5-3-1 New One-Act Play Festival.  Theo Ubique Cabaret Theater production credits include: Cabaret, Jacques Brel’s Lonesome Losers of the Night, Evita and The Light in the Piazza. For more visit TomaLangston.com.

Richard Paro is an award-winning director based in Chicago. He is the artistic director of Mudgeonsoul Productions and works with various companies around the city including Full Voice, Hobo Junction Productions, and Stockyards Theatre Project. Much of his work emphasizes coalition-building, including productions of Jane Martin’s satirical play Laura’s Bush and a new comedy dealing with the state of gender, class and immigration in the United States, In Pursuit. In addition, his feature-length and short films screen at film festivals around the world. He can also be found acting and writing for both theatre and film. Always excited to share his favorite theatre, movies and music with new audiences, he has worked in festival programming and organizing for years, most recently with Indie Boots Theatre and Film Festivals which take place in May.

Erik Parsons is currently the artistic director for Democracy Burlesque (only the politics are naked!), Chicago’s only political sketch comedy company. He also helped found the New Suit Theatre Company (entertaining educational theatre for adult audiences) where he served as the associate artistic director from 2009-2011. Growing up in a family of artists and educators, Erik developed a deep affinity for live performance at a young age. Prior to setting down roots in Chicago in 2006, Erik was life-long nomad, having lived in 15 cities and 10 states at last count. Through his travels and experiences, Erik has developed what he calls an ‘equal opportunity sense of snark’, which infuses his artistic work with a distinct sense of humor and unyielding honesty. When he is not producing, directing and/or performing, Erik works with wonderful children on the autism spectrum with HFAS to help them reach their immeasurable potential.

Brittany Westfall is a five year resident of Chicago, Brittany has also been involved with Polarity Ensemble Theatre’s Dionysos Cup Festival for the past two years and has been a regular volunteer for various professional theatre companies in the city over the years, helping out with everything from events to marketing to ushering. This spring she will serve as a casting assistant for Remy Bumppo Theatre Company. A communication arts (theatre) major from Malone University where she directed a stage adaptation of the acclaimedScrewtape Letters novel, Brittany has continued her theatre education by taking classes at Act One Studios, The Second City and Remy Bumppo Theatre Company. She is currently working on her singing skills at the Old Town School of Folk Music. This is her second time participating in Commedia Beauregard’s Master Works series.

Founded in St. Paul, Minnesota in 1999, Commedia Beauregard is a non-profit theatre company with a mission to translate the universal human experience to the stage; to expand our horizons and share knowledge of all cultures, translating between languages and between arts to create theater that is beautiful in expression. Today, Commedia Beauregard is headquartered in Chicago, Illinois and is producing exciting theatre in translation throughout the Midwest. For more, visit CBTheatre.org.

Founded in 1983, Raven Theatre is dedicated to breathing new life into American classics and exploring other works that illuminate the American experience. In addition to its three play season, Raven produces a Workshop Series of new and experimental productions, as well as teaching partnerships with various Chicago Public Schools, summer youth classes and original children’s shows performed at Raven Theatre. For more, visit RavenTheatre.com.