Mary-Arrchie Theatre Co. is ending it’s 30th and final season of theater with Abbie Hoffman Died For Our Sins XXVIII. This event will take place at The Den Theater at 1333 N. Milwaukee on August 19, 20, & 21. Tickets are $10 for an all day pass and $25 for a weekend pass. Tickets can be purchased at Ticketweb or at the box office. Abbie Hoffman Died For Our Sins is the long running non-stop 3-day theater festival celebrating the anniversary of the Woodstock Music and Arts Fair of 1969. Where Woodstock was about 3 days of peace and music, this is 3 days of theater with some music mixed in.For the last 27 years Mary-Arrchie Theatre Co. has been presenting 50 or more theater companies and performing individuals under one roof with a virtually non-stop weekend of theater. This year’s event is proving to be no different. We already have 50 different groups and performing individuals and more are coming on board. Some of this year’s participants include are Agit Pop, Black Forest, Jess Wright Buha, Collage Productions, Marla Cotovsky, Crown Vic Royal, Danger Circus, Democracy Burlesque, Down In Front, El Bear, Famous In The Future, Genghis Khan and His Destroyers, Indie Boots Theatre, Kelroy, Hawkeye Plainview, HippoHorseyDonkeyMonkey, Hobo Junction, Iguana Productions, The Inconvenience, Indie Boots Theatre, Little Howlin’ Wolf, The Living Canvas, The LIVINGroom, Maureen Sandiego, MaryArrchie West, Sophia Menendian, John Michael, Charles Minard, Nothing Without a Company, Oprah Frampton, Rush Pearson, Pirates!!!, The Plagiarists, PlayLab Productions, Primogen Theatre, Raven Theatre, REVOLUTION Theatre Company, The Right Brain Project, Saltbox Theatre Collective, Sense of Urgency Theatre est. 1995, Showmakers Anonymous, Stick in the Mud, Chris Simpson, Strawdog Theatre Company, Trained Monkey Productions, Eileen Tull, Larie Underwood, and Maggie Wagner. 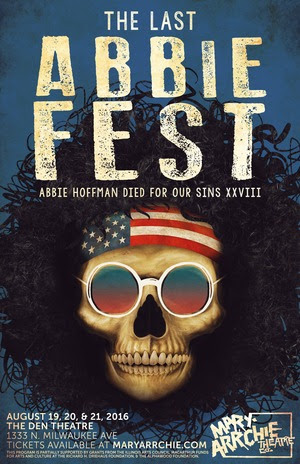 Some of the highlights include Famous In The Future who has performed at all of the past 27 festivals. Rush Pearson’s performance of Nikolai Gogal’s Diary of a Madman is always a must see. Danger Circus is an exciting demonstration of juggling, magic and escape that is not to be missed. Oprah Frampton is a hysterical music duo cut from the trio of Lola Bolatro which is always a crowd pleaser. Hobo Junction will bring us An Awful Night of Crap Part 5: A-Holes Assembllleeeee!!. Some great individual performances by Eileen Tull, Larie Underwood and Maggie Wagner. The Plagiarists and The Inconvenience always bring us an exciting contribution. We are also honored with the presence of Strawdog and Raven Theatre Co.’s in the mix. Mary-Arrchie Theatre Co. will for the last time bring out the staple performances of Gas Mask 101 by Arlene Cook and Wild Dogs by Matt Borczon and opening and closing ceremonies featuring Richard Cotovsky as Abbie Hoffman.

Here you will find the current schedule which is in flux right up to the event and the list of participants:
http://maryarrchie.com/wordpress/abbie-fest-xxviii-schedule/

Mary-Arrchie Theatre Co. was established in 1986 and is currently in its 30th full season of theater. We are committed to producing theater as an ensemble including actors, directors, and designers who are intimately involved in the process. We approach material, published and original, dealing with the fears and passions of the human condition involving characters who are often misunderstood, societal outcasts, and victims of their own exile. We have garnered a reputation for making risky choices by embracing challenging material for both our audience and the artists involved. We are dedicated to bringing light to controversial subjects and presenting alternative viewpoints of these subjects giving our audience different information to consider as they walk away from the theater.