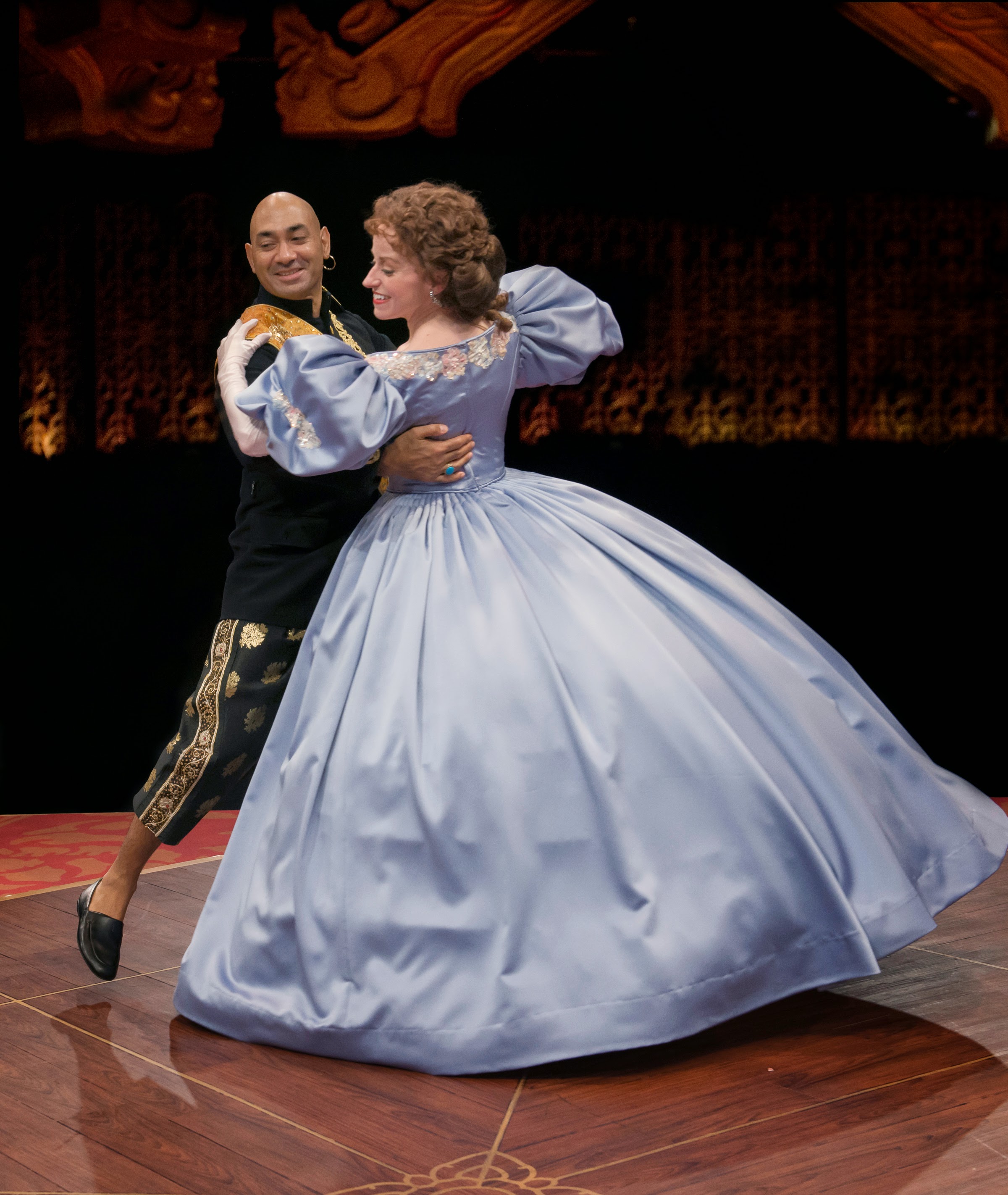 Rogers and Hammerstein’s classic and well-loved King & I , by Margaret Landon and the fictionalized diaries of Anna Leonowens, about a school teacher who travelled to Siam to teach the children of King Mongkut, was originally the idea of famed British stage star Gertrude Lawrence as a vehicle to reunite her and dear friend Noel Coward. She brought the book to Rogers and Hammerstein and the rest is history – with the exception of Noel Coward not in the role of the King. Wisely he realized that he was not right for the role however, knew of a Russian circus performer who would be perfect; the unknown Yul Brenner.

None of the team realized that the vocal trouble Lawrence was experiencing was the effect of liver cancer and that she would have a short run as Anna. Fittingly she was buried in the famous satin ball gown in which she and Brenner immortalized the polka, Shall We Dance.

At that point the focus shifted from Anna as the star to the King which Brenner would play for his lifetime in 1 film and many Broadway and touring productions and become the definitive King for others to follow.

Director Nick Bowling made a brilliant selection as their King in the New York actor Andrew Ramcharan Guilarte, who provides just a taste of Brenner but makes the role thoroughly his own through his immense talent, charisma and charm. His moments are so spontaneous that it looks like everything is happening for the first time. He communicates much through his eyes and has an animal magnetism and sex appeal. Two of his finest moments are when he becomes the barbarian that the English accuse him of being and his death scene, played with great detail and believability.

In the role of Anna Leonowens, Bowling chose one of Chicago’s most beloved performers, the indomitable Heidi Kettenring (one of my personal favorites) who comes across in a militant way which gives a too modern interpretation. I had flashbacks of Jodi Foster from the DATE film Anna and the King with Chow Yun Fat. I did not believe this was an English woman of breeding and manners in 1861 that had an inherent respect for royalty as any Brit from the Victorian era would.

My biggest gripe with Bowling’s interpretation is the lack of the central love story between the King and Mrs. Anna. I never felt any chemistry between Kettenring and Guilarte or that she was remotely attracted to the King. Instead, Anna was portrayed as a headstrong militant woman with her own agenda demanding respect and equality like a spoiled child. She is supposed to fall in love with the King which does not happen in this production. This is a major ingredient in the script as written by Rogers and Hammerstein, and one Bowling either overlooked or deliberately changed.

Bowling also fails at telling the story of the secondary love plot with Tuptim (Megan Masako Haley) and Lun Tau (Devin Ilaw) both played by very competent actors and singers, however lacking any real chemistry. Bowling’s staging did not help in that he had them apart for most of the show and made the unfortunate choice of having their main love song We Kiss In A Shadow moved to a classroom instead of a garden with shadows. When you are dealing with a tried and true classic of American theatre all you need to do is follow the formula and not attempt to wring out of it your own interpretation – it has worked since its first performance and was written by masters.

The rest of the casting has some strong choices, especially in the role of the King’s children and Bowling has given them great stage business and a special acknowledgement for Matthew Uzarraga who is marvelous as the young Prince Chulalongkorn,( played much younger than usual which provides greater pathos with the ending when he becomes King). Michael Semanic was a fine Louis Leonowen’s (Anna’s young son) and had a nice chemistry with Uzarraga.

In another pivotal role Bowling has cast the lovely Kristen Choi as Lady Thiang who has the most beloved song in the show, Something Wonderful. Appearing a bit young for the role she sings it powerfully but, because of the accelerated speed of the song, only skims the emotional surface. I fault the Musical Director Ryan T. Nelson and the Executive Producer of Marriott with playing it and every tempo so quickly as to finish in time so they do not have to pay overtime to the Unions. Musically there is a lack of finesse and detail with the delivery of many of the lyrical songs and the thinness of the sound does not help matters (they wisely cut the overture which would not have had the size it needs to be effective).

Having strong memories of the Marriot King & I which I attended in the mid-1990s with the magnificent Kevin Gudhal and Mary Ernster and the rich, lush sets, I was disappointed by the hard and sparse scenic design, lacking the splendor and richness of the Siamese court (although the surrounding carved panels were a great touch and gave a sense of size of the palace). There is an obvious lack of colorful fabric in the set design which would help soften it and what should have appeared gold leaf looks like yellow paint on plastic.

Costume Designer Nancy Missimi (who also costumed their first King & I) has chosen garrish tartan patterns for the King’s wives which appear more Scotch than Siamese and there is an overall lack of gold and detail which are found in actual court costumes of the era. The fabrics appear thin and cheap (with the exception of the King’s first costume which is straight out of the original production).  It is apparent that she lacked the budget demanded for this production.

Choreographer Tommy Rapley follows the original blueprint for the dance sequences and does a nice job with the staging of the ballet sequence The House of Uncle Thomas, adding the King’s children in which was refreshing.

Seeing Andrew Ramcharan Guilate’s King is worth the drive out to Lincolnshire and will be the one performance I will remember for a long time. When he is on stage you tend to forget many of the flaws and focus on his outstanding performance and the magnificent score and story penned by the two greatest Broadway writers in American history.

The King & I runs through January 4, 2015 at the Marriott Theatre in Lincolnshire.  For more information visit www.marriotttheatre.com