Marriott’s NOW & FOREVER: THE MUSIC OF ANDREW LLOYD WEBBER Is A Showcase Of Showstoppers

No composer in the last forty years has had more of an impact in the musical theater industry than Sir Andrew Lloyd Webber. Love him or loath him, Sir Andrew has created some of the most popular musicals in history while employing more actors, musicians, crew and industry personal then any impresario to date. I unabashedly love his most of his work, even the material that has not been seen by the masses. Though Webber has not really found the same success he had earlier in his career, he remains quite prolific and a force like no other to date. Now on the heals of the 25th anniversary of Broadway’s The Phantom of the Opera, the most successful entertainment creation in history, the Marriott Lincolnshire, through Marc Robin and Aaron Thielen, has been granted permission to Now & Forever: The Music of Andrew Lloyd Webber which showcases some of the composer’s showstoppers as well as a few of his lesser known works.

Done in a concert format, with a large number of dance pieces included, director Marc Robin brings together a sensational cast of actors, singers and dancers to interpret Webber’s numbers to glorious new heights. Lead by one of my all time favorite divas, Linda Balgord, who has a long association with Mr. Webber’s shows, the songs that have become standards in our modern day marketplace are performed with an energetic verve and authenticity that will make the composer proud.

The production opens with the now classic overture from Phantom with chandelier in tow. From there, the cast goes through Webber’s vast repertoire ranging from Joseph and the Amazing Technicolor Dreamcoat to his latest, Love Never Dies, the sequel to Phantom. With so much material to pick from, most will find their favorites somewhere in this two hour and fifteen minute showcase.

Ms. Balgord, who was the original Norma Desmond in the first national tour of Sunset Boulevard (opposite Ron Bohmer whom she also appeared with in the Robin Phillips’ production of Aspects of Love), shows just why Mr. Webber picked her to lead his shows. Her renditions of the arias With One Look, As If We Never Said Goodbye, Anything But Lonely and of course Memory are vocally superior to most other interpretations. As Ms. Balgord has appeared in the shows she is performing the actual numbers from, her presence instantly transports the audience to that specific show. Even without the costumes, Ms. Balgord became Norma Desmond, Rose Vibert and Grisabella, with each of her renditions leaving you with goose bumps.

The ensemble also delivers some amazing vocals, including one of my favorite Evita’s, Susan Moniz who does a fantastic rendition of Don’t Cry For Me Argentina. Max Quinlan has left the barricades of Les Mis and shines with Superstar and Gethsemane from Jesus Christ Superstar. Taylor Travis introduces much of the audience to the glorious Till I Hear you Sing from Love Never Dies and Brian Bohr brings his crisp lyric tenor voice for Starlight Express and Close Every Door from Joseph.

The choreography, which is shared between Mr. Robin, Matt Raftery and Harrison McEldowney, is also exquisitely used to interpret Webber’s classics, including many of the Variations used in Song & Dance, The Jellicle Ball from Cats, Pie Jesu (Requiem) and Whistle Down the Wind. Sir Andrew has also used his shows to showcase dance and has really never been given his due in the area. Cats, after all, was initially conceived (and for the most part remains) a tour de force for its choreography as did the dance portion of Song & Dance which tested the talents of even the great Wayne Sleep when it was first mounted. 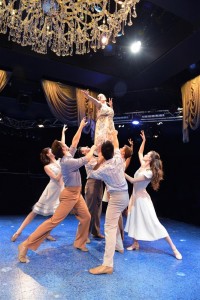 The Marriott orchestra shines under Patti Garwood’s direction and the sounds system (Robert E. Gilmartin) seemed clearer then it has for more recent shows. Some will also notice the “additions” of certain pre-computerized orchestrations, especially for the Phantom numbers (a licensing requirement no doubt).

Not all of the production works though, which is really not a fault of the show, but of the material itself. Webber’s songs (for the most part) are very show specific. This makes some of his numbers difficult to convey in when put in a different environment. I Believe My Heart from The Woman In White comes off a bit cheesy though in the actual show is quite stunning. Also, Diane Ferry Williams lighting design leaves many of the actors in the dark for a prolonged period of time and some even had trouble finding their spot. These are minor issues in an otherwise wonderful production.

Now & Forever: The Music of Andrew Lloyd Webber will probably not covert the naysayers but for those of us whose lives where changed because of his entry into the genre or for those who just love great music, this production is a must see.

Now & Forever: The Music of Andrew Lloyd Webber runs through March 17, 2013 at The Marriott Theatre, 10 Marriott Drive in Lincolnshire.The performance schedule is Wednesdays at 1:00 p.m. and 8:00 p.m., Thursdays and Fridays at 8:00 p.m., Saturdays at 4:30 p.m. and 8:00 p.m., and Sundays at 1:00 p.m. and 5:00 p.m. Ticket prices range from $40 to $48, excluding tax and handling fees. Students 17 and under and senior citizen 62 and older receive $5.00 off a full price theatre ticket for Wednesday Matinee, Saturday Matinee, Sunday Matinee and Sunday Afternoon performances. On Wednesday and Thursday evenings a limited number of Dinner and Theatre tickets are available for only $55.00 per person. For Friday, Saturday, and Sunday evening dinner reservations in The King’s Wharf or Fairfield Inn, please call 847-634-0100. Free parking is available at all performances. To reserve tickets, please call the Marriott Theatre Box Office at 847.634.0200. Visit www.MarriottTheatre.com for more information. For calendar information please visit www.TheatreInChicago.com