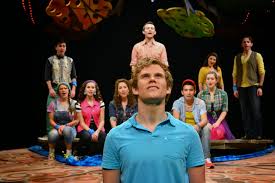 I knew walking in that the Marriott Theatre’s production of “Godspell” had some BIG shoes to fill.  Prepubescent Justin Kimball (me) had played “Judas” in his 7th grade production of Godspell, which got an amazing review… from his grandmother. So this production had a lot to live up to, and it did not disappoint. Godspell is a musical by Stephen Schwartz and John-Michael Tebelak that takes us through the Journey/Parables of Jesus Christ. It’s a beautiful show with romping dance numbers and beautiful PERFECT ballads. In other words, go see it wherever you can but definitely don’t miss Marriott Theater’s version of this classic musical. 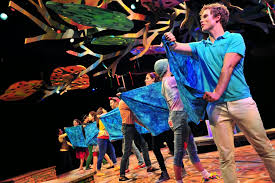 You walk into the theater with a set that looks like something between the Chicago Children’s Museum and the ever-delicious Rainforest Café. Set designer (Thomas M. Ryan) and lighting designer (Jesse Klug) brought us into a world of creativity and a child-like wonder.  The set had HUGE oversized branches that, along with the lighting, created a shadowy forest atmosphere that paired well with the (what looked like) actual grass on the stage. You just get the feeling that you are going to have the MOST fun with the actors on this stage and isn’t that what every set should do? Another very cool aspect of this set was the carabiner ropes that would come down from the stage. Technicians would hook and lift people, props and rather large pieces of the set using these. It gave the set another dimension and kept us on the edge of our seat waiting to see what exactly was going to happen. Finally, the keyboard built into the set was a very cool touch, even though I wish it could’ve been camouflaged a bit better. It felt a little out of place. Saying that, the technical aspects of this show get a definite gold star and a firm pat on the back.

Director and choreographer (Matt Raftery) really made some fun choices during this production that both excited me and surprised me a bit. I really enjoyed that within the production the “realism” of a group getting together to perform these stories was accentuated.  This led to some beautiful genuine moments between the characters; however, this realism from time to time led to some of the humor falling flat with the audience. Instead of the “slap sticky” type of comedy you often see from productions of Godspell, it relied more on pop culture references (twitter jokes, etc).  Also, during the very popular song “Day by Day” Raftery goes against the grain and decided to not do the traditional sign language and instead had the performers on stage create pieces of art to hang from those carabiners I mentioned earlier. This was a very fun decision but while the performers were making this art I felt a little isolated and left out to dry. I just wish the audience could have somehow been included. There were just a handful of moments where I thought the “look how cool this looks” overtook the story telling. Otherwise I applaud the production for the use of original props (golden hula hoops, very large scarves) and enjoyed the decision to make this production not just another cookie cutter production of Godspell.

The casting near perfection.  Jesus, played by Brian Bohr, felt incredibly genuine and likable. Not to mention that boy CAN SING.  The ensemble seemed like they truly were friends in real life and that kind of chemistry is hard to fake. I truly enjoyed watching them have fun. Oh, did I mention that every last one of them could had pitch perfect voices. The vocals in this show really stood out and audiences will be coming back to see more.  The only downfall (of sorts) was in the comedy.  You just have to go for some of these crazy silly jokes, and I felt like there was some holding back.

This production of “Godspell” is so fresh and fun; it is an absolutely perfect show to take the family out to see this summer. It’s incredibly entertaining while giving great life lessons from a story that has touched so many people’s lives.

Godspell will be running at the Marriott Theatre in Lincolnshire (10 Marriott Dr. Lincolnshire IL) until August 10th.  Call the Marriott Box office at 847.634.0200 or www.MarriottTheater.com for more information and ticket sales.