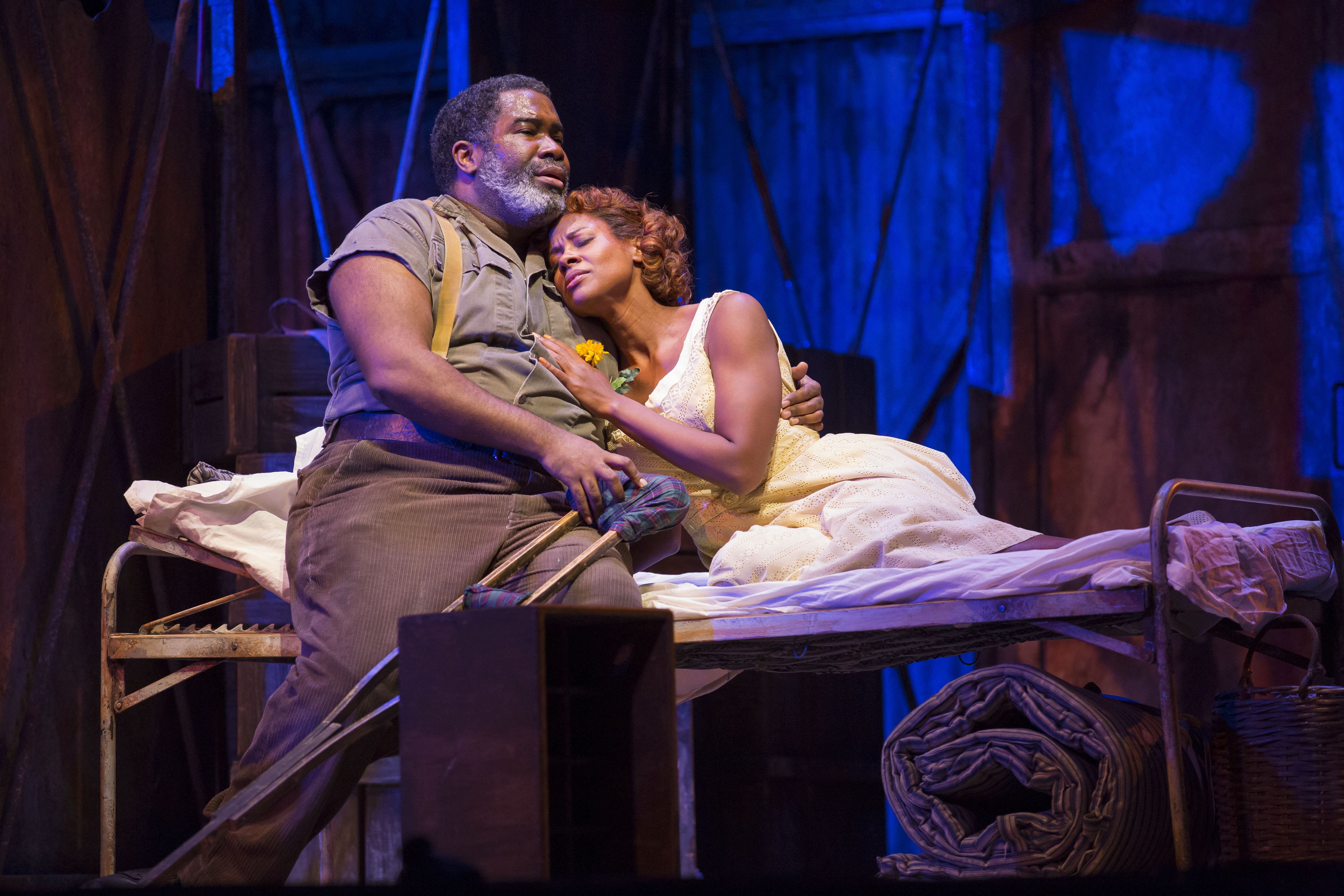 In 1926 George Gershwin read Porgy by DuBose Heyward, a native of Charleston, South Carolina, and immediately wrote to the author suggesting that they collaborate on a folk opera based on the novel. Heyward was enthusiastic, but it was 1934 before Gershwin’s composing and performing schedules permitted him to begin actual work on the project. Meanwhile, Heyward and his wife Dorothy dramatized Porgy for a 1927 production which incorporated spirituals into the action. This Theater Guild presentation of Porgy ran for 367 performances and elicited interest from others, among them Al Jolson, in using it as a basis for some sort of musical production. However, nothing came of these ideas and in 1934, after years of correspondence, George and Ira Gershwin joined DuBose Heyward in Charleston to write the opera which had been germinating in George’s imagination for several years.

For this huge revival the Lyric hired renowned opera director Francesca Zambello to present a “new” staging originally produced by Washington National Opera in 2008 (producers will never understand that doing the show as originally crafted by the artistic team is generally much more successful than putting a director’s “mark” on it) is moved from the 20s to the 50s and, though it has some plusses is ultimately a huge let down.

The plot of Porgy & Bess revolves around a love triangle between Porgy (Eric Owens), Bess (Adina Aaron) and Crown (a magnificent Eric Greene) which ends with a murder. Set in the old south of Charleston, South Carolina we experience the brutal treatment of blacks by the white officers of the law, the blight of drug addiction, and the superstitions and strong religious fervor and hope that keeps them going against all odds. Porgy wins Bess but loses her in the end to “happy dust,” vowing to follow her to New York and win her back.

Director Zambello made, what I consider, a disastrous choice with replacing the traditional wooden goat cart which Porgy, as a complete cripple, wheels himself around on using his hands to push him along, with a crutch and a leg, which is supposed to have some deformity (as Gershwin included in the original libretto) that never is believable. The goat cart quite literally places Porgy on the floor beneath everyone which creates the pathos and drives the tragic love story of a crippled beggar falling in love with a beautifully, vivacious and sexy woman like Bess. This misguided choice has ripples that mar the foundation of the book and the Gershwin Estate (which are the pit bulls of guarding the artistic integrity of Gershwin) should never have allowed her this artistic freedom.

She has also steered away with set design choices that rob us of the old South Charleston location of the fictitious Catfish Row where the action takes place. Trees with hanging moss have been replaced by a silver lame fabric dangling from the hard rusted steel structure that looks like they were ripped off the backs of drag queens. It is apparent that Zambello and the Lyric creative team could not decide on whether this was an abstract place or real one. Therefore we get a hodgepodge jumble creating a strange world for Porgy & Bess. It was also a confusing choice to have the scenes and acts blend together robbing us of the passage of time (this is the first production I have seen on stage and I got lost).

As always, operas staged at the Lyric are sung magnificently well and the orchestra under the baton of Conductor Ward Stone is unmatched and world-class. The Lyric is historically of the opinion that opera is largely about the voice and the staging and acting take a second seat.

Chicago audiences (like many across the nation and Europe) have demonstrated through their patronage that they do not like modern opera or classics which have been modernized but classic grand opera and not experimental and ugly regie opera (which is closing down opera houses throughout the country at an alarming pace). After act one I watched many of the major donors make a fast exit to their car (which does not bode well for the Lyric when they approach them for future donations).

Regarding the casting Zambello has mixed results in some of her choices. Eric Owen’s Porgy has a gorgeous booming baritone which fills the auditorium and he handles the difficult music magnificently well. I only wish his acting was up to his singing as I felt he did not capture the torment of Porgy, his situation and love for Bess; I never felt this was a life and death situation for him.

Adina Aaron’s Bess fares better in the acting arena (although I felt that she was not provided with strong direction to provide more variety to her moments) and has a gorgeous lyric, crystal clear and perfect pitched soprano voice and tremendous vocal dexterity.

The most disastrous casting choice was tenor Jermaine Smith (brought in especially to revive his role as Sportin’ Life). Next to Owens, Aaron and the rest of the outstanding chorus I could neither hear nor understand what came out of his mouth (I would have been completely lost if it were not for the subtitles above the stage) as he had such affectation with his delivery that his performance and character were lost. He also did not have the vocal power to fill an auditorium the size of the Lyric.

The two performers which walked off with the show were those of Karen Slack as Serena and Eric Greene in the role of Crown (the one who Porgy steals Bess away from and later kills in a fight which was horrendously enacted and lacked any danger or realism). Karen Slack was larger than life and the auditorium of the Lyric stage with a commanding presence and voice. Eric Greene set the stage on fire whenever he was on it giving a highly sexual, cocky, sensual and menacing performance. He dominated whatever scene he appeared in and walked off with most of the show.

As mentioned earlier, the chorus was amazing (there were well over 50) and when they sang in unison it went right through you. Gershwin’s score is complex to say the least and the mastery of the chorus was to be applauded.

However the real star of the evening is the iconic American composer George Gershwin who has penned a gorgeous, complex and memorable score with hints of Wagner and Strauss, utilizing a Strum and Drang structure that keeps you engaged throughout. If you have never seen a production of Porgy & Bess you should go just for the music and experience of seeing one of the only African-American operas in existence.