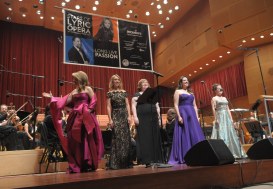 On Saturday, September 8, at 7:30 p.m., Lyric Opera of Chicago will present its annual gift to the city, a free outdoor concert at the Jay Pritzker Pavilion in Millennium Park. The concert annually attracts capacity crowds of 11,000+.

Goerke makes her Lyric debut starring in the title role of the season opener, Elektra. Phillips will costar as Stella in the season closer, A Streetcar Named Desire (with Lyric’s creative consultant Renée Fleming as her sister Blanche). Bridges will appear in Elektra (debut), Simon Boccanegra, and Rigoletto. Barbera will portray Ernesto in Don Pasquale. Wagner sang the title role of Ariadne auf Naxos last season, and Jovanovich portrayed Don José/Carmen in 2010-11.

The Lyric Opera Chorus returns to The Stars of Lyric Opera at Millennium Park  concert for the first time since 2007, prepared by the company’s new chorus master, Martin Wright. The chorus plays a central role in the portions of La traviata and Carmen being performed, and will also feature prominently in several other highlights of the concert.

“I’m delighted that our magnificent chorus can be so prominently featured in this concert after a five-year absence,” says Anthony Freud, Lyric’s general director. “Along with our exceptional orchestra and soloists they will be heard by an enormous and appreciative audience, both in the beautiful Pritzker Pavilion and Millennium Park grounds and on the radio broadcast.”

Following intermission, the chorus will perform the Entrance of the Guests from Act Two of Wagner’s Tannhäuser. Portraying Princess Eboli in Act Four of Verdi’s Don Carlos, Christine Goerke will sing the aria “O don fatal et détesté.” The chorus will then sing the famously inspiring “Va pensiero” from Verdi’s Nabucco. Amber Wagner  as Santuzza  will join the chorus for the Easter Hymn scene from Mascagni’s Cavalleria rusticana.

All of Lyric’s regular-season performances take place at the Civic Opera House, 20 N. Wacker Drive at Madison Street in Chicago. There are projection English texts for every opera. Subscriptions are still available, as are tickets for individual performances. Discounts are available for group tickets. For information on specific performance dates and ticket availability, please call (312) 332-2244 or go to www.lyricopera.org.