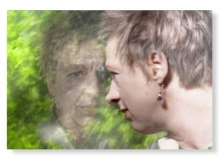 Professor Alice Howland is at the peak of her career studying the human brain when her own mind begins to falter. Fiercely independent, she battles to preserve her way of life, even as confusion clouds her thinking and her memory begins to fail. This world premiere adaptation of the award-winning novel is at the same time heartbreaking and hopeful.

“What is extraordinary about Lisa Genova’s book and Christine’s adaptation of it is that it takes on a fact of life which has increasing relevance for so many of us, but treats it with great compassion, humor, humanity, and light.  This play gives us a rare opportunity to get ‘inside the head’ of someone experiencing Alzheimer’s disease, while also giving us insight into the experience of those family members who are first-hand witnesses and must change and adapt alongside her,” says Artistic Director Andrew White.  “This production is also a reunion of sorts for us, bringing back to Lookingglass some long-time friends, Christopher Donahue and Mariann Mayberry, both of whom worked with us in some of our earliest productions and have since gone on to terrific stage careers in Chicago and nationally.  Having these members of our extended family back to work with so many Ensemble members — Christine Mary Dunford, John Musial, Eva Barr, David Kersnar, and Tracy Walsh — and joined by first rate actors Cliff Chamberlain and Joanne Dubach, makes this family story ring with even more resonance.”

Christine Mary Dunford’s adaptation of the novel Still Alice was inspired, in part, by her longtime work with The Memory Ensemble, which she co-founded with The Northwestern Cognitive Neurology and Alzheimer’s Disease Center (CNADC).  The Memory Ensemble is an improvisational theater intervention designed to improve the quality of life for persons with early stage Alzheimer’s disease and related disorders (ADRD). The Memory Ensemble uses improvisational theater to provide a unique therapeutic intervention for people in the early stages of ADRD. Improvisation focuses on bringing one’s personal awareness into the moment, which fosters new ways of thinking, and emphasizes self-awareness, imagination, and spontaneity. This theater program sees persons with dementia for their creative potential, rather than for their loss, and has the potential to improve quality of life, provide physical and mental stimulation, offer emotional support, alleviate stress, and educate others about ADRD.

Still Alice is a recipient of the 2012 Edgerton Foundation New American Play Award, and will be part of the Bodies of Work Festival of Disability Arts and Culture, which is an eleven day, multi-venue Chicago festival featuring visual and performing arts by artists with disabilities and highlighting work about disabilities May 15 – 25, 2013. Click here to learn more: bodiesofworkchicago.org.

Still Alice has been chosen as a selection for the 2013 World Book Night U.S., which is a celebration of books and reading held on April 23, when 25,000 passionate volunteers across America give a total of half a million books within their communities to those who don’t regularly read. In 2012, World Book Night was celebrated in the U.S., the UK, Ireland and Germany, and saw over 80,000 people gift more than 2.5 million books.

Eva Barr (Alice/Ensemble Member) is still among us after founding the Lookingglass Theatre Company with seven other unemployed cohorts in 1988. Since then, she’s built DreamAcres Farm, an off-the-grid, organic vegetable farmstead in SE Minnesota, and founded the Dreamery Rural Arts Initiative, offering arts and agricultural experiences for all ages. She has appeared in Lookingglass’ Hard Times, Manuscript Found at Saragossa, and The Brothers Karamozov, among others.

Cliff Chamberlain (Thomas) makes his Lookingglass debut with Still Alice.  Chicago credits include productions at Steppenwolf, The Goodman, Timeline, Northlight, ATC, Writers’, and The House, where he is a proud Company Member. Broadway credits: Superior Donuts. TV and Film credits: “The Mob Doctor,” “Outnumbered” and The Wise Kids. Cliff is a founding member of Sandbox Theatre Project and a graduate of UC Santa Barbara and The School at Steppenwolf.

Chris Donahue (John) first performed with Lookingglass 23 years ago in The Odyssey, followed by Eurydice,The Arabian Nights, and Metamorphoses. He is extremely grateful and proud to be a part of their 25th Anniversary season. In Chicago, he has also appeared at Court Theatre, The Goodman Theatre, Remains Theatre, Stormfield Theatre, The Chicago Shakespeare Company, the Circuit Court Jesters, and Stories on Stage.

Joanne Dubach (Lydia) is a graduate of the School At Steppenwolf and a member of The Division Theatre Company. Local credits include The Glass Menagerie with Mary-Arrchie; A Life with John Mahoney at Northlight Theater; Absolute Hell at the Gift; and Bordello and Hickory Dickory at Chicago Dramatists. Regional credits include The Lieutenant of Inishmore and The Little Dog Laughed with The Phoenix Theatre. She will be performing next in the remount of The Glass Menagerie with Mary-Arrchie at Theatre Wit in May.

David Kersnar (Doctor Davis/Ensemble Member) is a founding ensemble member of the Lookingglass Theatre Company and has performed, designed and directed with the company since 1988. Kersnar last appeared inOur Town, Secret in the Wings and Summertime. Kersnar also appeared with the Goodman, Steppenwolf, Remains, the Brooklyn Academy of Music, The Actor’s Gang in Los Angeles, and the Touchstone Theatre of Pennsylvania. Kersnar has twice served as the Lookingglass Artistic Director, and founded and directed Lookingglass Education & Community Programs and has served as Master Teacher. Kersnar is currently an adjunct professor at Northwestern University and Roosevelt University. Film and television credits include U.S. Marshals, Since You’ve Been Gone, “Early Edition,” and “Turks.” David holds a BS in theatre/performance studies and a MFA in directing from Northwestern University.

Mariann Mayberry (Herself) last appeared at Lookingglass in Argonautika and prior to that in The Master and Margarita. She is a member of the Steppenwolf Theatre Company where she has been in numerous productions including most recently Good People. Other credits include Broadway: August: Osage County,Metamorphoses and One Flew Over The Cuckoo’s Nest. Off Broadway: Go Back To Where You Are and The Notebooks of Leonardo Da Vinci. Television: “Law & Order (SVU, Trial by Jury, Criminal Intent),” “Mercy,” “Are We There Yet,” “The Dave Chappelle Show,” The Quecreek Miner’s Story,” “Dillinger.” Film: Dogman, The Company, War of the Worlds and Since You’ve Been Gone.

Tracy Walsh (Doctor Tamara/Ensemble Member) is a Lookingglass ensemble member. She has appeared in many plays at Lookingglass over the years. She directed The Old Curiosity Shop at Lookingglass and several plays for the Lookingglass Young Ensemble. She has choreographed dances and movement sequences for plays at Lookingglass, The Goodman Theatre, and Chicago Opera Theatre. Tracy and her husband own Lighthouse Yoga in Evanston where she teaches prenatal yoga and works with children with special needs.

Christine Mary Dunford (Adaptor/Director/Ensemble Member) has been a Lookingglass Ensemble Member since 1989 and has originated roles in nearly two dozen Lookingglass productions that played in Chicago, New York and Los Angeles. In addition, she adapted/directed The Manuscript Found in Saragossa, and acted in her own one-person play, Under the Fig Tree. Most recently she sang the parts of Marianne and the Grandmother in Eastland; played Gail, the counselor, in Trust, and Mrs. Webb in Our Town. Some of her favorite roles include Maria in The Jungle and Contessa/Philomena in Vanishing Twin. Over the years Christine has served the company as managing director and director of development, and she has taught with Lookingglass’ Education and Community program since its inception. In addition to Lookingglass, Christine has worked with a number of other Chicago and regional theaters, in television, films, and in radio plays. Christine has a MA in cultural anthropology and a PhD in performance studies. She is currently the Associate Chair of the Department of Theatre and Music at UIC, and will be Director of the new School of Theatre and Music at UIC in the Fall of 2013. In 2009 Christine cofounded the Memory Ensemble, a joint project of Lookingglass and Northwestern’s Alzheimer’s Disease Center (CNADC) that uses performance activities and improvisation to improve life for people with memory loss.

Lisa Genova (Author) is the author of The New York Times best-selling novels Still Alice, Left Neglected, and Love Anthony. As both a Harvard-trained neuroscientist and a woman who watched her grandmother suffer through Alzheimer’s, Genova deftly married science and compassion in her debut Still Alice, hailed as “a work of pure genius,” “insightful, tragic, inspirational” and “heartbreakingly real.” All of Genova’s novels are about people living with neurological diseases and conditions that are feared, ignored, or misunderstood, portrayed within a story that is accessible to the general public, revealing the humanity behind the science. Genova lives with her family on Cape Cod.

Sunday, April 28, following the 3:00 pm matinee
Living and Learning: A long and complicated journey begins with a diagnosis of Alzheimer’s Disease. This panel will look at the latest understanding of the disease, what the most recent research tells us, and where current trends in both science and care are leading.

Sunday, May 12, following the 3:00 pm matinee
Living and Changing: It’s a given that people with Alzheimer’s Disease can expect changes to occur. But what is the range of changes to body and mind, at what rate, and what are some adaptive responses? What kinds of care have mitigated some of these changes for both those with the disease and those around them?

Sunday, May 19, following the 3:00 pm matinee
Living and Identity: Making connections between aging, dementia, and disability. What is a disability, and who defines what qualifies as a disability? Is dementia a disability? How can we, as a society, embrace the changes and differences between others? Curated and facilitated by Carrie Sandahl, Associate Professor, UIC Institute on Disability and Human Development.

Thursday, May 2nd, following the 7:30 pm performance
Living and Legality: What happens when patients and family members suddenly face a host of questions about Alzheimer’s Disease – not just medical, but legal and financial? What changes are afoot in law and financial planning, and what resources are available to help them sift through these challenges?  Curated and facilitated by John McGowan, Senior Vice President, Northern Trust Bank

Production Sponsors for Still Alice are Allstate and The Edgerton Foundation.