With ‘Eastland: A New Musical’, Lookingglass Theatre has done what every few companies have ever been able to achieve, making a theatre piece become a spiritual experience.

The S.S. Eastland was a passenger ship based in Chicago during the early 1900’s  and was used mainly for tours, hardly ever venturing farther than Michigan.  On July 14, 1915, the Eastland was docked and boarding at Clark St.and Lake St. for a Western Union company picnic that would take the ship to what is now known as New Buffalo, Michigan.  At approximately7:30am, the ship listed and rolled over onto its side killing 844 of the almost 2,500 passengers on board.

‘Eastland: A New Musical’ was penned by Lookingglass Artistic Director Andrew White and contains a haunting and melodic score by Ben Sussman and Lookingglass Artistic Associate Andre Pluess.  Unlike its predecessor, ‘Titanic: The Musical’, Eastland is allowed more artistic leeway as far as back-story goes because it focuses on the everyday working class segment of society that garners no press or publicity.  It is without these confines that Mr. White’s book flourishes.  Told in flashback as many are taking their last breathes, we see how these individuals got to be on the ship that faithful day.  Each one tugging deeper and deeper into your heartstring, no matter what moral justification some had for boarding. 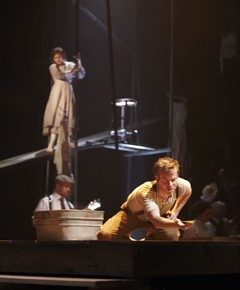 Director Amanda Dehnert has brought together a perfect cast, most employed with the double duty of providing musical accompaniment (and not of the distracting John Doyle/Sweeney Todd type).   Here the actors as musicians work in tandem providing very period appropriate melodies and harmonies.  Michael Barrow Smith proves the foil as the ship’s Captain who must shoulder the blame for the disaster when in fact he was only one small piece of the puzzle.  Doug Hara as Reggie, The Human Frog is a physically perfect human being who takes to single handedly fetching souls from the river, all under the watchful eye of Harry Houdini.   Then there is Erik Hellman, who has the uncanny ability to of making the avocado the sexiest fruit on the planet (Rick Bayless should take a lesson) while Monica West’s Iise makes life choices that has tragic consequences for her and her son.

The beauty of ‘Eastland: The Musical’ is that each of the passengers, whether they live or die or regardless of the moral choices they make to lead them to the ship that July 14th is treated with an abundance of respect by the show’s creative team.  It is that respect for those lost souls that moved this critic to tears and the rest of the audience the evening I saw the performance.  What is more important is that after the show, many people, including myself, journeyed to the site where the disaster took place to pay their respects.  That evening, all the stars that shone above Clark and Lake Street seemed a little bit brighter as acknowledgement of 844 people seemed to have finally been given their due, all because of a musical.  Now if that isn’t the true power of theater, I don’t know what is.