Looking Over the President’s Shoulder at American Blues Theater Opens Feb. 11 at the Greenhouse 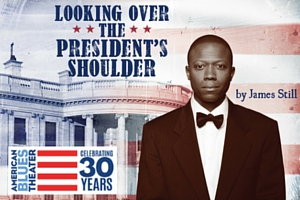 “Long before the election of President Barack Obama, there was an African-American man who, for 21 years, had very much been running things at the White House,” comments Director Timothy Douglas. “It is with great honor and eagerness that I return to Chicago to stage this intimate and moving tribute composed by longtime friend and colleague James Still.”

Before Lee Daniels’ “The Butler,” playwright James Still shared the real-life, inspirational story of Alonzo Fields, grandson of a freed slave, who grew up in an all-black town in southern Indiana. Forced by the Depression to give up his dreams of becoming an opera singer, Fields accepts a job at the White House and served there for 21 years. This tour-de-force solo play is told from the unique perspective of serving four U.S. presidents and their families: Herbert Hoover, Franklin Roosevelt, Harry Truman, and Dwight Eisenhower. “Gentle Americana, amiable, and dignified…the appeal is its peeking through the keyhole quality,” said The Washington Post.

James Still’s (Playwright) award-winning plays have been produced throughout the U.S., Canada, Europe, Australia, South Africa, China, and Japan. Recent premiers include Appoggiatura at Denver Center, The Widow Lincoln at Ford’s Theatre, and Before We Forgot How to Dream at Indiana Repertory where he is the Playwright in Residence. His new play Miranda premiers later this year at Illusion in Minneapolis. He is a four-time Pulitzer Prize nominee for his work in the theater, and a five-time Emmy nominee for his work in television. He received the Otis Guernsey New Voices Award from the William Inge Festival, the Todd McNerney New Play Prize from Spoleto and is an elected member at the Kennedy Center. He is proud to be an Artistic Affiliate of American Blues. He lives in Los Angeles.

Manny Buckley (Alonzo Fields) joined the ensemble of American Blues Theater in 2012. Most recently, Buckley was seen in 1984 at Steppenwolf, and in Waiting For Lefty at American Blues. He originated the role of “Carson” in Hit the Wall (The Inconvenience), which sold out houses at Steppenwolf’s Garage Rep and Theater on the Lake. His performance earned him the “Best Actor Award” from the Chicago Reader and a Black Theater Alliance Award as “Best Featured Actor.” He has also performed with Steppenwolf for Young Audiences in Of Mice and Men, House Theater of Chicago’s Dorian, Chicago Dramatists’ Southbridge, Profiles Theater’s Hellcab, Next Theater’s The Piano Teacher, Pavement Group’s Harry and the Thief, City Lit’s Comrades Mine, and Gift Theater’s The Last Days of Judas Iscariot and Streamers. Buckley was on national tour as “Satchel Paige” in the original touring production of The Satchel Paige Story. He also had the privilege of performing at the Kennedy Center and in the only selection from the U.S. to appear in the English Language Theatre Festival in Bratislava, Slovakia. His other credits include “Chicago Fire,” “Under Covers,” “Sugar” and “Pilgrim.”

Community Service for Looking Over the President’s Shoulder

American Blues Theater is proud to continue “Pink Previews” for this production. Proceeds from preview performances are donated to the Lynn Sage Foundation for breast cancer research. In addition American Blues Theater collaborates with DuSable Museum and The Family Institute at Northwestern University.

FACT SHEET/Looking Over the President’s Shoulder

Students receive a $10 discount with a valid student ID.

Groups of 6 or more patrons receive a $10 discount per ticket.

The multi-generational and interdisciplined artists have established the second-oldest professional Equity Ensemble theater in Chicago.  The 38-member Ensemble has 530 combined years of collaboration on stage. As of 2016, the theater and artists received 172 Joseph Jefferson Awards and nominations that celebrate excellence in Chicago theater and over 28 Black Theatre Alliance Awards. The artists are honored with Pulitzer Prize nominations, Academy Awards, Golden Globe Awards, Emmy Awards and numerous other accolades.