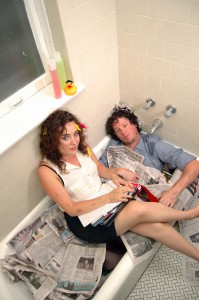 (left to right) Hilary Williams and Joel Ewing in LiveWire Chicago Theatre’s production of THE MISTAKES MADELINE MADE by Elizabeth Meriwether, directed by Krista D’Agostino. Photo by John Taflan.

THE MISTAKES MADELINE MADE tells the story of a young woman, Edna, who develops Ablutophobia, the fear of bathing. Struggling with a soul-crushing job as a personal assistant and an unexpected loss, she wages a furious and funny war against all things complacent, pampered and clean. As Edna’s smell starts to overwhelm her co-workers and many casual lovers, the play raises the questions: is dirty living a political act? And is clean living even possible in these times of unrest?

“Meriwether has such a witty and wily ability to take the seemingly familiar and crack it wide open – and with that leave many aspects of the piece up for interpretation,” comments director Krista D’Agostino.  “There also seems to be a cultural draw right now towards the experience of ‘the girl.’  During last year’s television season alone, there were numerous shows that debuted featuring young women ‘getting by’ and many that laid it right out there in the title, including Meriwether’s own New Girl, 2 Broke Girls and Lena Dunham’s Girls. While on the surface we see Edna as just another unsatisfied and underutilized newly inducted member of the workforce, what’s gradually revealed is that underneath the shell of this good-for-nothing-millennial, is a desperate and passionate young woman on the edge of a breakdown – and a breakthrough,” adds D’Agostino.

Advance tickets are on sale for $10 through October 4 using code “ADVANCE.”  Tickets are currently available at www.greenhousetheater.com.

Elizabeth Meriwether is an American playwright and screenwriter, television producer and writer.  Most recent credits include the 2011 romantic comedy film No Strings Attached, the FOX sitcom New Girl starring Zooey Deschanel and the 2010 play Oliver Parker! The Mistakes Madeline Made was originally produced by Naked Angels Theater and was subsequently produced at Yale Rep and by Holland Productions in Boston, MA and published by Dramatists Play Service. Her other plays include Heddatron, an adaptation of Hedda Gabler featuring live robots and Nicky Goes Goth, which was first produced in 2004 in the New York Fringe Festival.

Originally from Boston, Krista D’Agostino is a director, actor and producer. She joined LiveWire in 2011, and spearheads LiveWire Unplugged, the company’s new play reading series. She directed “Cause Celebre” as part of LiveWire’s VisionFest 4.  As an actor, she recently appeared in The Chicago Mammal’s production of All Girl Moby Dick. Krista has directed productions at The Williamstown Theatre Festival Workshop, Harvard University, Boston Actors Theater, MosesMogilee in New York and The Boston Theatre Marathon. She is the founder of Holland Productions in Boston, MA where she directed The Mistakes Madeline Made; Hideous Progeny; The Baltimore Waltz; and KID SIMPLE: A Radio Play in the Flesh, among other plays. She received her undergraduate degree in Theatre Arts from Boston College. Krista is the Program Manager for the League of Chicago Theatres.