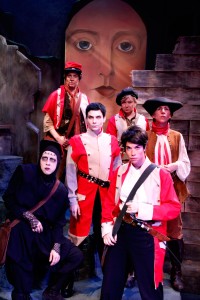 I must be up front with you, when I first heard that I was seeing the Lifeline Theater’s performance of “Monstrous Regiment” I had zero idea of what I was getting into. So, I went to the old “world wide web” to look up exactly what this play was about, AND… was confused even further.   I asked someone who had read the novel and he replied with “It’s kinda like Mulan, but with monsters… and stuff.” With this very intriguing ideal in mind I entered the theater and was not let down at all.  Kevin Theis (the director) took me on a fun filled, plot/brain twisting adventure that kept me laughing and more importantly…. thinking.

To sum this up for you REAL quick, this production is set in the author’s (Terry Prachett) fictional and magical realm of “Discworld”. The exact location is “West Borogravia, The year of the Fruitbat” if we are going to be specific. The action surrounds a group of female soldiers dressed as men, a vampire, an igor and of course a troll. They have decided that they will join the army to defend their land and bring honor to their god like figure “the duchess”. SO now that you are caught up let’s get to it. 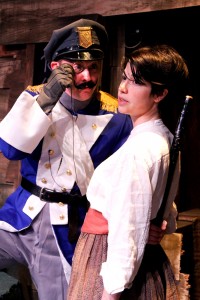 The technical aspects of this production really stood out as a big win for Lifeline Theater. When you walk into the theater you will first see a very strange, very exciting location for this play to be set. Scenic designer Joanna Iwanicka has created a tiny piece of this magical world that honestly.. I wanted to play on. The set is very tall and steep which gives the production a very apropos sense of danger throughout. Not to mention Kevin Theis was able to use the space to perfection. The large decaying painting of the duchess was an eery look into what kind of production this is going to be. Not to mention the fantastic use of shadow by the lighting designer, Kevin D. Gawley.  LAST BUT CERTAINLY NOT LEAST, the costuming and puppetry (masterfully done by Emily McConnell and Kitty Campbell) were pretty much the bees knees. I would recommend seeing this show based off of the troll costume alone.

“But what about the acting Justin?” I’m glad you asked reader. There was some definite stand out performances in this production. The style of this play is very much in the vein of slapstick, bitty, mel brooks style comedy with a hard edge. The three “monster” characters (Vampire: Michaela Petro, Igor: Katie Mclean Hainsworth and the Troll: Justine C. Turner) really ALMOST stole the show for me. Very funny actresses who brought a realism to these outrageous characters.  Robert Kauzlaric as Lt. Blouse and Christopher M. Walsh also gave some hilarious performances, which on a few occasions brought me to obnoxious blurting laughter, which is not so easy to do. Brava fellas.

As much as I enjoyed this production, there were some definite “flaws” involved. For one, it was entirely too long. I absolutely understand that the adaptor, Chris Hainsworth, had his work cut out for him due to the wordy, long winded aspects of this story but the second act dragged us down with SO much going on. We barely had time to swallow what we had before three more elaborate plot twists unfolded. I just need it sharpened up so I don’t feel like I’m missing important parts of the story and not let it drag. ALSO, the three girls that were not monsters felt a little one note. For the entire first act they kind of blended in with the scenery and when they finally got their moments, they felt rushed and not thoroughly explained. I just want to see more from them. AND FINALLY, the bits. I love me some bits, but on quite a few occasions they might have been over used/not followed all the way through. If you are going to do a bit, GO for it. Hopefully that will continue to be cleaned and tinkered with as this production goes onward.

Lifeline Theater should be very proud of this performance.   A definite must see for the “smashing through the set ” climactic moment at the very least.

Monstrous Regiment runs May 30-July 20th at Lifeline Theater (6912 Glenwood Ave) Tickets can be purchased at the Lifeline Theater Box office (773.761.4477) or by visiting www.lifelinetheater.com