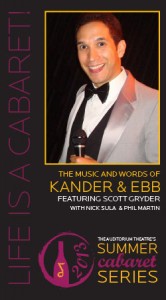 A few months ago, when I reviewed a few other cabaret shows, I noted that performing in a cabaret show is very different from performing in a concert. There are some very basic, yet necessary requirements for cabaret.  The artist must create a story, and tell that story through the music they are singing. The story should be natural and portrayed as a natural conversation with the audience to bring the audience into the life of the story. This is particularly true if a cabaret artist includes musical theater into his/her repertoire. The singer should be able to recreate those theatrical moments on stage.  I am very pleased to say that Scott Gryder was successful at meeting all of these requirements during his tribute to famed  composer John Kander and lyricist Fred Ebb, with his show; “Life is a Cabaret – The Music and Words of Kander and Ebb”.

Celebrating the 50th Anniversary of legendary songwriting duo, Scott Gryder, pianist Nick Sula and drummer Phil Martin, delighted the full house audience with an outstanding musical tribute to one of the most talented musical teams in history. The Roosevelt University Katten/Landau Studio provided yet another fabulous setting for their summer cabaret series.

Scott brought the audience through a musical journey singing and speaking of Kander and Ebb’s history and 50 year collaboration.  Captivating the audience with Kander and Ebb’s most notable tunes including songs from  “Flora the Red Menace”, “Woman of the Year”,“Chicago”, “70 Girls 70”,“Kiss of the Spider Woman”, “New York New York”, and the one and only “Cabaret.”  Scott Gryder not only sang with perfection, but brought the audience to that place where they experienced each show with his warm charm, extreme wit, and theatrical ability. Scott’s high energy made his performance interesting, fun, and enjoyable.

Scott‘s show, which ran for a little more than 90 minutes with two sets included favorites from all of the above shows above, featuring some songs that were specifically written by Kander and Ebb for Kaye Ballard and Liza Minnelli. The songs highlighted were:  Sara Lee (written for Kaye Ballard in 1962), Ring Them Bells (from Liza With A Z 1972), and a wonderfully witty song called Don’t Smoke in Bed ( from Liza’s Back 2002); one of Liza’s more recent shows.   There were some favorites A Quiet Thing (Flora, the Red Menace 1965), Yes (70, Girls, 70 1971),  (Liza with a Z 1972), Cabaret (Cabaret 1966), Maybe This Time (Cabaret film 1972), Theme from New York, New York -excerpt (New York, New York film 1977); (which Kander and Ebb had to change  the name from New York-New York because of a copyright dispute with Broadway writers Adolf Green and Betty Comden); But the World Goes ‘Round (New York, New York film 1977), and  a powerful rendition from the title of the 1992  musical “ Kiss of the Spiderwoman” ;  the web building song that tells the story, and a song and dance spectacular with “Where You Are”. Then there were some of the more obscure Kander and Ebb songs which included: Sitting Pretty/The Money Song (Cabaret 1966/ which was written for the film Cabaret 1972), I Don’t Care Much (specifically written for the Cabaret revival 1987), and Sometimes A Day Goes By (Woman of the Year 1981).  Then Scott sang two songs that are seldom heard and I confess that I never heard, Bobo’s (The Act 1977), and Colored Lights (The Rink 1984). I will have to say “Colored Lights” is comparable to Jacques Brel’s “Carousel” with a fast carneval paced sound. This song was one of my favorites of the evening. Of course, most of the Kander and Ebb songs are my favorites, and Scott hit the mark with all of them.  I would be remiss if I did not mention Scott Gryder’s signature tune and one of his encores, “Mister Cellophane” (Chicago 1975). Scott delves into the character with this song with his body language and facial expressions.

In “Life is a Cabaret – The Music and Words of Kander and Ebb” Scotty brings all of his musical and theatrical talent together, backed by his musical director, musical partner, and partner in life, Nick Sula. Extremely talented Nick, who is in the IT business by day, also plays and is Musical Director for many other Chicago Cabaret shows and artists by night.

Even though, Scott is barely in his 30’s, he is no stranger to being on stage.  A Brownfield, Texas native who received his BA Degree in Theater from Texas Tech University in Lubbock, Texas.  There, Scott also studied puppetry. Scott then came to Chicago to explore the theater world of the big city.  Over the past two years, Scott is connected with a national children’s television show called Green Screen Adventures that brings student stories to life. The actors, including Scott don various costumes to create the story for television. Scott, also a master tailor, assists in creating many of the show’s costumes. Green Screen Adventures, currently appears on independent Television stations and locally on WGBO TV and METV. In 2012, Scott won an Emmy for “Outstanding Achievement in Makeup”. Scott has also performed at Davenport’s including cabaret shows; “Hooray for Hollywood” and the John Hughes inspired, “I’ll Stop The World and Belt With You”. Other stage rolls include: “The 25th Annual Putnam County Spelling Bee”, (Chip), “Thrill Me” (Nathan Leopold), and “Little Shop of Horrors” (Seymour).

After moving to Chicago, Scott met Music Director, Nick Sula and decided to put together a cabaret act called “Simply Scotty”.  “Simply Scotty” is a unique cabaret act that incorporates a huge repertoire of ballads, theater and silly and fun songs. Scott blends a musical cocktail with the zingy tunes of vintage Judy Garland along with the spirited enthusiasm of the cast of Glee. “Simply Scotty” showcases Scott’s style, poise and show business know how. “Simply Scotty” also includes Scotty’s puppetry magic. Scott brings his characters “Freddy the Puppet” “La Van Deer” and other TSGpuppetry creations to life.  Simply Scotty is currently celebrating its 3 year anniversary at Club 3160. If you want to complete your weekend in a fun way, you can see Simply Scotty the first Sunday of every month at Club 3160, located at 3160 North Clark Street in Chicago.

In presenting the summer cabaret series, the Auditorium Theater strives to feature a diverse array of artists, especially ones from Chicago. Auditorium Theater Executive Director Brett Batterson definitely has a winning season and promises more on August 24 where The Auditorium Theater will present “Chicago Musical Legends”. This show will feature the Sinatra stylings of Frank D’Rone, the hot jazz piano and vocals of singer, Judy Roberts; and the seductive musical stylings of Chanteuse and Chicago Cabaret Queen, Denise Tomasello. The Auditorium summer cabaret series showcases versatile Chicago performers where audiences are able to connect with the performances. Due to the intimate cabaret setting and their close proximity to the musicians, this unique atmosphere creates a magical evening of entertainment at the Auditorium and the Kattan/Landau Theaters .

Scott Gryder and Nick Sula put together one fabulous evening of great entertainment.  Scott and Nick are joined on stage by drummer, Phil Martin, who kept the beat to Scott’s performance.  This show was definitely a must see and a winner! Even though, “Life is a Cabaret – The Music and Words of Kander and Ebb” is a single performance, I am certain you will see more from Scott Gryder in the future; both in Chicago and possibly nationally. Scott provides a fresh new face to the cabaret and theater community. Don’t miss him.

For additional information for Scott Gryder’s upcoming performances and Scott’s CD “Pure Imagination” which feature many musical favorites; visit his website at www.thescottgryder.com to purchase his CD, calendar information, videos, and more. I know you will thoroughly enjoy!