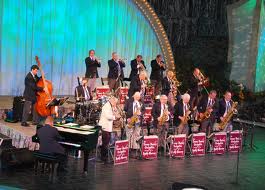 THE TOMMY DORSEY ORCHESTRA was formed in 1935 by Tommy Dorsey, trombone player and the most popular band leader of the Swing era. The ensemble achieved commercial success with their warm ballads that showcased popular crooners like Jack Leonard, Edythe Wright and Frank Sinatra. Frank Sinatra’s career blossomed with Dorsey and with Sinatra’s vocals, the band became more successful than ever. The band’s most recognizable songs include “Night and Day,” “I’ll Never Smile Again,” “Marie,” “On the Sunny Side of the Street,” “Song of India” and “Skylark.” THE TOMMY DORSEY ORCHESTRA had 286 Billboard chart hits, with seventeen number one hits in the 1930s and 1940s. “I’ll Never Smile Again,” featuring Frank Sinatra on vocals, was number one for twelve weeks on the Billboard pop singles chart in 1940. “In the Blue of Evening” was number one on the Billboard pop singles chart in 1943. The orchestra continued to perform and record under Dorsey’s leadership until his death in the late 1950s. Dorsey was posthumously inducted into the Grammy Hall of Fame in 1982.

THE TOMMY DORSEY ORCHESTRA was revived in the 1970s and has continued to perform for decades. The orchestra is currently under the leadership of Terry Myers, a world-renowned clarinet and saxophone player, and delights audiences around the world with its explosive Big Band sound.

The performance schedule for THE TOMMY DORSEY ORCHESTRA is as follows: Monday, October 28 at 1:30 p.m., and Tuesday, October 29 at 1:30 p.m. Show-only tickets are $55. Lunch and show tickets are $70. Subscriber and group discounts are available. For reservations, call the Drury Lane Theatre box office at630.530.0111, or TicketMaster at 800.745.3000. For more information, visit www.drurylane.com.