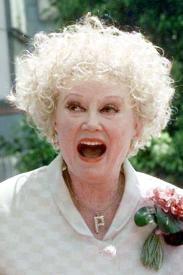 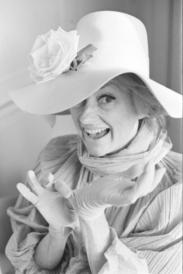 LOS ANGELES (AP) — Phyllis Diller, the housewife turned humorist who aimed some of her sharpest barbs at herself, punctuating her jokes with her trademark cackle, died Monday morning in her Los Angeles home at age 95.

“She died peacefully in her sleep and with a smile on her face,” her longtime manager, Milton Suchin, told The Associated Press.

Diller, who suffered a near-fatal heart attack in 1999, was found by her son, Perry Diller. The cause of her death has not been released.

She was a staple of nightclubs and television from the 1950s — when female comics were rare indeed — until her retirement in 2002. Diller built her stand-up act around the persona of the corner-cutting housewife (“I bury a lot of my ironing in the backyard”) with bizarre looks, a wardrobe to match (by “Omar of Omaha”) and a husband named “Fang.”

Wrote Time magazine in 1961: “Onstage comes something that, by its own description, looks like a sackful of doorknobs. With hair dyed by Alcoa, pipe-cleaner limbs and knees just missing one another when the feet are wide apart, this is not Princess Volupine. It is Phyllis Diller, the poor man’s Auntie Mame, only successful female among the New Wave comedians and one of the few women funny and tough enough to belt out a ‘standup’ act of one-line gags.”

She inspired a generation of female comics, including Joan Rivers, Ellen DeGeneres and Whoopi Goldberg, who remembered Diller on Twitter Monday.

“We lost a comedy legend today,” DeGeneres wrote. “Phyllis Diller was the queen of the one-liners. She was a pioneer.”

“A true original has died,” Goldberg wrote of Diller. “There was NO One like her, no 1 looked like her sounded like her. A FUNNY FUNNY. Classy & Smart. RIP.”

Rivers tweeted that she and her daughter had lunched with Diller last month.

“I’m beyond saddened by the death of Phyllis Diller. We were friends,” Rivers wrote. “The only tragedy is that Phyllis Diller was the last from an era that insisted a woman had to look funny in order to be funny.”

Diller described herself as “one of those life-of-the-party types,” in an interview with AP in 1965. “You’ll find them in every bridge club, at every country club. People invited me to parties only because they knew I would supply some laughs. They still do.”

She didn’t get into comedy until she was nearly 40, after her first husband, Sherwood Diller, prodded her for two years to give up a successful career as an advertising and radio writer. Through it all, she was also a busy mother.

A Chicago Tribune columnist, describing her appearance at a nightspot there in 1958, noted she was from San Francisco, hailed her as “the weirdest, wildest yet” — and made sure to mention her five youngsters.

Her husband managed her career until the couple’s 25-year marriage fell apart in the 1960s. Shortly after her divorce she married entertainer Warde Donovan, but they separated within months.

Through both marriages and other relationships, the foibles of “Fang” remained an integral part of her act.

“Fang is permanent in the act, of course,” she once said. “Don’t confuse him with my real husbands. They’re temporary.”

She also appeared in movies, including “Boy, Did I Get a Wrong Number” and “Eight on the Lam” with Bob Hope.

In 1966-67, she was the star of an ABC sitcom about a society family trying to stave off bankruptcy, “The Pruitts of Southampton.” Gypsy Rose Lee played a nosy neighbor. In 1968, she was host of a short-lived variety series, “The Beautiful Phyllis Diller Show.”

But standup comedy was her first love, and when she broke into the business in 1956 it was a field she had largely to herself because female comics weren’t widely accepted then.

Bob Newhart said Diller was one of a kind.

“The thing that strikes me most about Phyllis, aside from a joy to be around, was her uniqueness,” he said Monday. “There was no one like Phyllis before, and I doubt if there will be anyone afterher, Larry King, Kiefer Sutherland and Henry Winkler also mourned the comedienne.

Winkler wrote that she was “a painter on canvas and in humor of the human condition.”

Although she could be serious during interviews, sooner or later a joke would pop out, often as not followed by that outrageous “AH-HHAAAAAAAAAAAA-HA-HA-HA!” laugh.

“It’s my real laugh,” she once said. “It’s in the family. When I was a kid my father called me the laughing hyena.”

Her looks were a frequent topic, and she did everything she could to accentuate them — negatively. She wore outrageous fright wigs and deliberately shopped for stage shoes that made her legs look as skinny as possible.

She felt different about plastic surgery later, though, and her face, and other body parts, underwent a remarkable transformation. Efforts to be beautiful became a mainstay of her act.

Commenting in 1995 about the repainting of the Hollywood sign, she cracked, “It took 300 gallons, almost as much as I put on every morning.” She said her home “used to be haunted, but the ghosts haven’t been back since the night I tried on all my wigs.”

She recovered from a 1999 heart attack with the help of a pacemaker, but finally retired in 2002, saying advancing age was making it too difficult for her to spend several weeks a year on the road.

“I have energy, but I don’t have lasting energy,” she told The Associated Press in 2006. “You have to know your limitations.”

After retiring from standup, Diller continued to take occasional small parts in movies and TV shows (“Family Guy”) and pursued painting as a serious hobby. She published her autobiography, “Like a Lampshade in a Whorehouse,” in 2005. The 2006 film “Goodnight, We Love You” documented her career.

When she turned 90 in July 2007, she fractured a bone in her back and was forced to cancel a planned birthday appearance on “The Tonight Show With Jay Leno.” But it didn’t stop her from wisecracking: “I still take the pill ’cause I don’t want any more grandchildren.”

Born Phyllis Driver in Lima, Ohio, she married Sherwood Diller right out of school (Bluffton College) and was a housewife for several years before getting outside work.

She was working as an advertising writer for a radio station when a comedy turn at San Francisco’s Purple Onion nightclub launched her toward stardom.

She made her network TV debut as a contestant on Groucho Marx’s game show, “You Bet Your Life.” (Diller, asked if she was married: “Yes, I’ve worn a wedding ring for 18 years.” Marx: “Really? Well, two more payments and it’ll be all yours.”)

She credited the self-help book, “The Magic of Believing” by Claude M. Bristol, with giving her the courage to enter the business. For decades she would recommend it to aspiring entertainers, even buying it for them sometimes.

“Don’t get me wrong, though,” she said in a 1982 interview that threatened to turn serious. “I’m a comic. I don’t deal with problems when I’m working.”

“I want people to laugh.”

Diller is survived by her two children, four grandchildren and a great-granddaughter. Plans for services are pending.