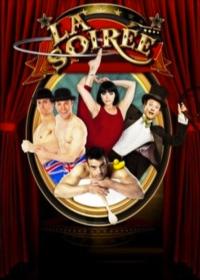 Back by popular demand and just in time for the holidays, Riverfront Theater, Chicago’s newest entertainment destination, presents the return of the theatrical phenomenon La Soirée. The production runs December 5-22, 2012 at the new Riverfront Theater, located at 650 W. Chicago Avenue, just east of Halsted Street. Press Opening is Friday, December 7, 2012 at 7:00pm.

Winner of the 2012 London Cabaret Awards, La Soirée is a potent and addictive cocktail of cabaret, new burlesque, circus sideshow and contemporary variety which has taken the world by storm. Audiences from Sydney to London, Paris to Montreal, and New York to Stockholm have all fallen for its sexy, funny and dangerous charms. Showcasing the crème de la crème of cabaret entertainers from around the globe, including stars of the Olivier Award-winning La Clique, La Soirée promises some of the most outrageous, hilarious, beautiful and downright bizarre acts you will ever see

The holiday run of La Soiree will feature old friends from the U.S. Premiere at Riverfront Theater last summer as well as some exciting new faces, including the incredible rubberman – world famous contortionist Captain Frodo, the ‘large and little’ acrobatic duo Chris & Iris, a hot and sassy new hoop act by Marawa the Amazing, and an exciting electro-pop contemporary Irish dance routine that is anything but traditional by Up & Over It.

Tickets, $39-$85, for the three-week, limited engagement are now on sale at the Riverfront Theater box office, 650 W. Chicago Ave, www.RiverfrontTheater.com; and through Ticketmaster, www.ticketmaster.com or 888.556.9484.

La Soirée is an ever-changing line-up of some of the best performers in the world. La Soirée is recommended for Mature Audiences.

Some of the acts currently scheduled at Riverfront Theater include:

Captain Frodo
The son of a famous Norse magician, this wunderkind has graced the stage since he was four. Possessed of an utterly beguiling charm, and famed the world over for bending, contorting and manipulating his body into shapes that are as astonishing as they are unnatural, Frodo is one of a kind. You will never look at a tennis racquet, much less a baked-bean tin, the same way again.

Nate Cooper
Sit back, relax and enjoy the chaos. Cooper delivers a jaw dropping performance that is sure to put you in stitches, figuratively speaking of course. Try to imagine Charlie Chaplin tap dancing on roller skates whilst juggling razor sharp machetes and you will only be scratching the surface of what Cooper has in store for you. From the sublime to the ridiculous is an understatement. On the street in New Zealand or in an arena in Las Vegas, Cooper delightfully charms the pants off of himself.

Susannah Martinez
Following in the high-heeled footsteps of the inimitable Ursula Martinez, her little sister Susannah is equally captivating. Keeping it in the family, her rendition of the cult striptease act with its mischievous disappearing hanky is a jaw-dropping sensation.

Chris & Iris
The phrase ‘little and large’ doesn’t quite do justice to German acrobatic duo Chris-Iris. At 6ft 5 Christopher Schlunk fairly eclipses the petite but perfectly formed Iris Pelz, which makes tossing her into the air, throwing her about like a rag doll, and balancing her on his head seem as effortless as bouncing a ball. After all, why juggle with clubs when you’ve got your partner on hand?

Marawa the Amazing
Conquering the world with hoops! Sassy, hot to trot and as skilled as they come, Marawa is both sleek cabaret artist and cheeky clown. A virtuoso of the Hula Hoop and a demon on skates, she has dazzled on stages across the world, with her unique brand of coquettish comedy charming and amazing audiences in equal measure. Part Josephine Baker and part Betty Boop, Marawa is an exquisite package of carnival energy!

Up & Over It
Fed up of the same old Irish Dance shtick? Bored of the velvet-clad, tin-whistling-blowing, diddly-idleness? Ever dreamed of a place where two seasoned professional Irish Dancers mix it up with electro-pop, nouveau folk and video? Then look no further…Suzanne Cleary and Peter Harding tap into La Soirée stretching Irish Dance to its very limits!

The Riverfront Theater is Chicago’s newest destination for music, theater, dance, spectacles and more. Audiences were first introduced to the venue last summer, during the successful 16-week run of Peter Pan. The Riverfront Theater expands on that success, bringing hit productions to Chicago. All performances take place in the 22,000 square-foot, temperature-controlled tented auditorium along the scenic Chicago River. Alongside the performance venue is River’s Edge, a pavilion tent and promenade area overlooking the Chicago River, where patrons can enjoy refreshments while taking in the view from this urban garden oasis.

The Riverfront Theater is located at Chicago Avenue and Halsted Streets, easily accessible for those driving in or via public transportation. For more information, visit www.RiverfrontTheater.com.

Additional programming will be announced soon.