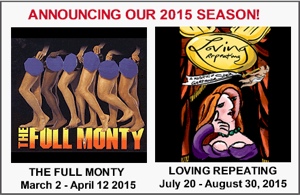 Taking a sharp detour from the antisocial themes of the 2014 season (SWEET SMELL OF SUCCESS, ASSASSINS), in 2015 Kokandy explores an alternate side of the human condition; shifting from a focus on individual ambition to the power of investment in our fellow man.

Based on the Fox movie of the same name, the Terrence McNally/David Yazbek hit THE FULL MONTY tells the story of a group of unemployed American male steel workers who venture into stripping to provide for their families. In the process, they learn to let go of prejudices, insecurities, and even their self-definitions – baring their hearts and souls as much as their skins. Directed by Kokandy Co-Artistic Director John Glover, THE FULL MONTY will run March 2nd to April 12th, 2015 in Theater 1 at Theater Wit in Chicago.

Using Gertrude Stein’s own words as lyrics, Kokandy’s summer offering LOVING REPEATING is an intimate exploration of the celebrated writer’s legacy that sets her unconventional passions and creative spirit against the backdrop of her lifelong relationship with Alice B. Toklas.  Directed by Kokandy Co-Artistic Director Allison Hendrix, LOVING REPEATING will runJuly 20th to August 30th, 2015 in Theater 3 at Theater Wit in Chicago.

States Hendrix, “If 2014 is Kokandy’s ‘season of cynicism,’ an exploration of the human capacity for destruction, then 2015 will be our ‘season of hope,’ an exploration of the human capacity to create and redefine beauty. Although the characters in both seasons face questions about self-identity and success, in THE FULL MONTYand LOVING REPEATING we see them choosing community – learning to find inspiration in their relationships to each other. As a company, we’re excited to continue a dialogue with our audiences, returning and new, that moves through the difficulties of being human and into the joys of creation and beauty.”

In addition to the mainstage lineup, Kokandy Productions will continue their commitment to developing the careers of local musical theater artists by presenting the second season of their New Musical Staged Reading Series. The series will consist of two in-development musicals (titles TBA) composed by Chicago-based artists, to be presented on select Monday nights during the runs of the mainstage shows.

John D. Glover (Co-Artistic Director) made his Kokandy debut as Director of THE GREAT AMERICAN TRAILER PARK MUSICAL and most recently directed their productions of SWEET SMELL OF SUCCESS, and THE LAST FIVE YEARS.  Former Managing Director of the Theater Company of Purdue University, John is also a freelance director whose credits includePUMP BOYS AND DINETTES for Purdue Theater Company (Northern Indiana Excellence in Theater Foundation winner Best Direction Of A Musical), and FLOYD COLLINS for Towle Theater (NIETF winner Best Direction Of A Musical). In 1996, John received the NIETF Award for Lifetime Achievement in Regional Theater.

Allison Hendrix (Co-Artistic Director) made her Kokandy debut as Music Director for THE GREAT AMERICAN TRAILER PARK MUSICAL, and was most recently seen as The Baker’s Wife in The Hypocrites’ INTO THE WOODS.  Other credits include Cathy in Kokandy’s THE LAST FIVE YEARS where she also served as Co-Music Director. Music Director for Piven Theatre Workshop’s CITIES OF LIGHT, and Bailiwick’s ZANNA DON’T,Associate Music Director/Conductor for Bohemian Theatre Ensemble’s FLOYD COLLINS, and Vocal Director for Towle Theatre’s FLOYD COLLINS (NIETF Winner Best Vocal Direction). She will be seen this June as Lynette “Squeaky Fromme” in Kokandy’s upcoming production of ASSASSINS.

Scot T. Kokandy (Executive Producer) holds a BS from the University of Illinois at Chicago and an MBA from Purdue University. In addition to his work with Kokandy Productions, Scot co-producedGOOD BOYS AND TRUE with the Towle Theater, THE MUSICAL OF MUSICALS THE MUSICAL at 4th Street Theater in Chesterton, and was one of the People of Godspell who produced the 2012 Broadway revival of GODSPELL.

Jonathan Goldthwaite (Production Coordinator) holds a BA in Arts, Entertainment, and Media Management from Columbia College Chicago, and is the former Artistic Director of the Dallas-based company Rusty Pegasus Productions, where he directed SPRING AWAKENINGand THE UMBRELLA PLAY.