Kathryn Gauthier’s “20 Years in Vision and Voice” at Wrigleyville Uncommon Ground, Thursday May 23, 2013 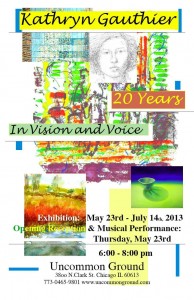 Kathryn Gauthier, award-winning visual and performing artist, will enthrallChicago audiences on Thursday, May 23 from 6 – 8 PM with a musical performance of 20 songs along with a 20 year retrospective of her paintings at Uncommon Ground, 3800 N. Clark St, Chicago.

For Gauthier’s bio and a preview of the range of her vision, go to
www.GauthierArts.com and take a virtual tour.

Of particular note will be pieces from Gauthier’s “Jazz Series”,
semi-abstract expressionistic paintings inspired by Chicago’s avant garde
jazz scene. As a vocalist she has great respect for the skill and raw energy
of this genre.  It’s as if the music suddenly became paint and threw itself
onto her canvases. Also being featured are still life paintings from her
“Object As Subject” series, “Lake Moods” series, and “Urban Reflections”
Series.  Both she and her husband Gregorio Mejia are gifted muralists
working in and around Chicago.

Gauthier will be performing original folk, blues, and jazz along with some
of her favorite standards.  Her Style has been likened to a cross between
Joni Mitchell, Dominique Eade, and the Roach Sisters.  Two CDs currently
available through CDBaby.com are “First Steps” (jazz), and “Sunshiny Day”
(Children’s Acoustic Folk).

This showcase of multidisciplinary artist Gauthier will also include a few
world premieres of new musical works soon to be released on CD. Guitarist /
producer-engineer Victor Sanders will also feature on this release and
accompany Gauthier at this performance.