Judi Dench stars in this charming romantic comedy A FINE ROMANCE: COMPLETE COLLECTION On DVD May 7, 2013 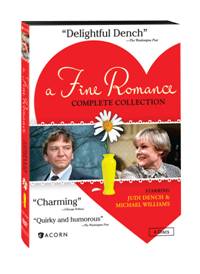 Starring real-life couple and legendary actors Dame Judi Dench(Shakespeare in Love, Skyfall) and her late husband Michael Williams (Educating Rita)as two middle-aged misfits embarking on an unlikely romance, the British comedy gem A Fine Romance: Complete Collection arrives to DVD from Acorn on May 7, 2013. A classic of the genre, the collection features all four series of the affable comedy that earned Dench one of her 10 BAFTA Awards for best actress. Newly packaged and now with SDH subtitles, the DVD 4-Disc set includes all 26 episodes ($59.99,AcornOnline.com). A Fine Romance aired on public television from 1981-1984.

Brainy translator Laura is introduced to shy landscape gardener Mike by Laura’s younger sister, who is intent on finding a mate for her spinsterish sibling. Awkward and rumpled, Mike fails to impress the prickly Laura. Still, he plucks up the courage to pursue her, and the two bumble through a courtship marked by insecurities, misunderstandings, and hilarious true-to-life situations.

Judi Dench has been nominated for more than 20 BAFTA Awards, 10 Golden Globes, and six Academy Awards, including winning the Oscar for Best Supporting Actress for Shakespeare in Love.