JUDAS REDUX TEAM ANNOUNCES CASTING FOR THE LAST DAYS OF JUDAS ISCARIOT TO BE PRESENTED AT CHICAGO’S STAGE 773, Aug 23 – Sept 8, 2013 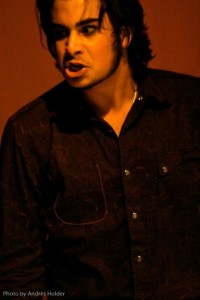 The Judas Redux team (led by Executive Producers Julia Albain and Corey Lubowich of Team StarKid fame) proudly announces casting for a new production of The Last Days of Judas Iscariot by Stephen Adly Guirgis, and directed by Julia Albain. The Last Days of Judas Iscariot will be presented at Stage 773, 1225 West Belmont in Chicago, for 18 performances, August 23 – September 8, 2013.

The Last Days of Judas Iscariot tells the story of a court case over the ultimate fate of Judas Iscariot. Set in a time-bending, darkly comic world between heaven and hell, the play reexamines the plight and fate of the New Testament's most infamous and unexplained sinner. The play uses flashbacks to an imagined childhood, and lawyers who call for the testimonies of such witnesses as Mother Teresa, Caiaphas, Saint Monica, Sigmund Freud, and Satan.

“This is a show I have been talking about doing for almost five years, and the timing just felt right,” said Director and Executive Producer Julia Albain. “Many of us were ready to return to the roots of our training and see how we have changed as artists. I wanted to give some of these incredible actors a chance to showcase themselves in a different light.”

Julia Albain first directed The Last Days of Judas Iscariot through the University of Michigan’s Basement Arts in 2008. That production included StarKid fan favorites Lauren Lopez, Joey Richter, Brian Rosenthal, and Darren Criss, who went on to star on the FOX hit “Glee” and the recent Broadway revival of How to Succeed in Business without Really Trying. Judas Iscariot also marked one of the first (and last) times the group worked together before Team StarKid’s A Very Potter Musical took the internet by storm. The overwhelming fan response spawned StarKid Productions and the popular parody musicals A Very Potter Sequel, Starship, and Holy Musical B@man!, as well as two sold-out national tours (directed by Julia Albain), and an engagement at Second City (directed by Corey Lubowich).

Stephen Adly Guirgis (Playwright) is co-artistic director and proud member of LAByrinth Theater Company. His plays have been performed on five continents and throughout the United States. Jesus Hopped the 'A' Train, Our Lady of 121st Street, In Arabia We'd All Be Kings, The Last Days of Judas Iscariot and The Little Flower of East Orange were all produced by LAByrinth and directed by Philip Seymour Hoffman. Judas and Little Flower were co-productions with the Public Theater. Other plays include Den of Thieves, Race Religion Politics, Dominica: The Fat Ugly Ho and the upcoming Untitled/St. Paul play. UK and regional premieres at the Donmar Warehouse (Olivier nom.), the Almeida (dir. Rupert Goold), the Arts, the Hampstead, Edinburgh (Fringe First Award) and two Midwest premieres at Steppenwolf. New Dramatists alumnus, MCC Playwrights and Ojai Playwrights member. TV writing credits include NBC's “UC: Undercover,” David Milch's CBS drama “Big Apple,” “NYPD Blue” and “The Sopranos.”

Julia Albain (Director) is an actor, director, producer and writer based in Chicago IL. She received her BFA in Theater Performance from the University of Michigan and is a proud alumni of the school. In recent years Julia produced and directed two national concert tours in association with StarKid Productions and Live Nation, as well as worked on countless other shows and projects. She is currently signed with Writer's House of New York City and is working on a YA novel. The Last Days of Judas Iscariot marks her first independent producing endeavor.

Nico Ager (Sigmund Freud/Saint Matthew/Soldier 1) is a 2009 graduate of the University of Michigan where he obtained his BFA in acting. Since graduating, he could be seen in several Detroit area productions including Dog Sees God (Magenta Giraffe), Cloud Tectonics (New Theater Project), and Mercury Fur (Ringwald). A resident of Chicago since 2011, local acting credits include Holy Musical B@Man! (StarKid), Thirty Thousand One (Pursuit Productions), and Skriker (Red Tape).

Shashona Brooks (Mary Magdalene/Loretta) makes her Chicago debut in Judas. Shashona is a Bay area native and holds a B.A of Theater Arts from UC Santa Cruz. She went on to work with Shakespeare Santa Cruz as a Company Member before moving to Los Angeles. Since her move to LA, she has worked extensively with Finite Films creating internet inspired short films. Shashona is also a resident company member with a budding company called Will Play for Food Theater Group, a company that gives new works a chance to be staged. Previous roles include Willy Lohman (Death of a Salesman) Hermia (Midsummer Nights Dream), Cinderella (Cinderella) and Benvolio (Romeo and Juliet).

Reed Campbell (Judas Iscariot) is originally from San Francisco, California and is a recent graduate of University Of Michigan where he earned his B.FA. Degree in Acting. Campbell is based in New York City and can be seen this May and June in Shakespeare In The Park's production of The Comedy Of Errors directed by Daniel Sullivan.

Britney Coleman (Gloria/Soldier 2) is a native of Ann Arbor, MI, where she received her BFA in Musical Theater from the University of Michigan. Since graduating UofM Coleman moved to NYC and performed in regional productions of Tarzan, Hairspray, State Fair, Big River, andInto the Woods, as well as Karen O and Adam Rapp's Stop the Virgins. Coleman made her Chicagoland theater debut last fall playing “Deena” in Dreamgirls at the Marriott Lincolnshire Theater. She will be reprising the role Fulton Opera House and Maine State Music Theater this summer.

Ali Gordon (Matthias of Galilee/Sister Glenna/Soldier 3) has been seen recently at the Weston Playhouse in Vermont as “Chava” in Fiddler on the Roof and “Lucy” in You’re a Good Man, Charlie Brown. In New York, Gordon played the role of “Miriam” in a workshop of the new musical, Tell Me All. Proud U of M graduate (Class of 2012). While at the University of Michigan, she received the Dennis McIntyre Award for Undergraduate Playwriting for her work on the new musical Gibson Fleck. She is also part of the sketch comedy project Far From Famous.

Lauren Lopez (Saint Monica/Mother Theresa) is a performer based in Chicago. Her previous work includes numerous shows with Team StarKid, sketch comedy at Second City's UP Comedy Club, and new musical workshops at New World Stages in NYC. She is a graduate of the University of Michigan's Department of Theatre and Drama.

Jessica Maynard (Henrietta Iscariot) has worked recently with Remy Bumppo Theatre, Hubris Productions, Modofac Productions, and The State Theatre of Chicago. Regionally she has worked with The Southern California Lyric Theatre, and The Michigan Shakespeare Festival. She is also currently involved in Pursuit Production's Blood Wedding. She graduated with a BFA from the University of Michigan, and will be attending DePaul University in the Fall to pursue her MFA.

Alex Odell (Fabiana Aziza Cunningham) is a graduate of the University of MI acting program and is now based in New York. In February of 2012 she launched Insert Name Media and she now spends her days working with young women to change the world. She’s currently producing The Hannah Project with ten NY area teens and in preproduction to put her vlog, Tidbits by Sasha, back in action.

Joey Richter (Satan/Saint Thomas) graduated from the University of Michigan with a BFA in Theater Performance – Acting in 2011. During his time in Ann Arbor, Joey began to work with fellow friends and peers on a series of black box musicals that would later evolve into Starkid Productions. Joey has performed in several Starkid projects including A Very Potter Musical/Sequel/Senior Year as Ron Weasley, Starship as Bug, Me and My Dick as Joey Richter, and a cast member for national concert tours, the SPACE Tour and theApocalyptour. Joey currently resides as an actor in Los Angeles pursuing a career in film/television and voice over. He can be seen as Officer Petey on the Disney Channel'sJessie and as Apple #8 on Glee. He also appears as Theon Greyjoy in the web series School of Thrones and later this year in the animated feature, Khumba. Judas Redux marks Joey's first experience being on the producing end of a major theatrical production.

Brian Rosenthal (Bailiff/Simon the Zealot) has appeared regionally at the Michigan Shakespeare Festival (Julius Caesar, All’s Well That Ends Well), as well as with The Peterborough Players (The Torchbearers, The Foreigner). University of Michigan credits include Line, Hair, Speech and Debate, Victoria Station, The Diver, etc. Additionally, Brian is a proud company member of Team StarKid (A Very Potter Musical, A Very Potter Sequel, A Very Potter Senior Year, Apocalyptour) and has collaborated on several original theatrical works in Detroit and Ann Arbor.

Daniel Strauss (Yusef El-Fayoumy) graduated from the University of Michigan in 2007 with a BFA in Theater Performance, and moved to Chicago to pursue improv and comedy. Since then, he has performed at the iO Theater, the Playground Theater, the Upstairs Gallery, and is an alum of the Second City National Touring Company.

Joseph Walker (Saint Peter/Pontius Pilate/Uncle Pino) acts, writes, and sometimes teaches in Chicago IL. He graduated from the University of Michigan’s School of Music, Theater, and Dance in 2009, and moved to Chicago as part of Starkid Productions. He has appeared in all of their shows to date (A Very Potter Musical, Sequel, and Senior Year, Me and My Dick,Starship, Holy Musical Batman!, and Twisted). He can also be seen on MTV’s “Underemployed.”

Liam White (Butch Honeywell) grew up in Ann Arbor, MI, and went on to attend the University of Michigan, receiving degrees in both acting and filmmaking. Though he has since focused his efforts almost exclusively on directing. Recent projects include the music video for Charlene Kaye's “Forever is A Long Time” and the live concert filming of Team Starkid'sApocalyptour.

Sarah Petty (Lighting Designer/Production Manager) is a Chicago native. Her most recent notable projects include four StarKid musicals, including Holy Musical B@man, Starship,AVPS and AVPSY as well as the upcoming Twisted. She has toured with StarKid on two national tours, Apocalyptour and SPACETour, and worked on Airport For Birds, a sketch comedy show at Second City. She has also been involved with music videos for artist Charlene Kaye (Animal Love I and Human), and was the production assistant on the national tour of A Christmas Story, the musical!

June Saito (Costume Designer) is a freelance costume designer and artist currently living and working in Chicago. She graduated from the University of Michigan with a BFA in Art and Design and a concentration in Costume Design. Since moving to Chicago she has designed for Starkid Productions on their original musicals of Starship, Holy Musical B@man, and A Very Potter Senior Year as well as their 2012 concert tour, Apocalyptour. Most recently she designed for The Black Ensemble Theater on Doo Wop to Hip Hop and The Other Cinderella. Other theater credits include stitching at The Chicago Shakespeare Theater and Lookingglass Theatre and two summers designing and teaching for the National High School Institute at Northwestern University.

Judas Redux is an experiment in pulling back the curtain on how shows are created and produced by independent artists. Starting with the launch of the Kickstarter campaign through closing night, the group will document the entire process of mounting a production ofThe Last Days of Judas Iscariot and open it up for both the community and online audiences to follow and participate in. Updates about the project, including pictures, videos, blogs, and more, can be found at www.judasredux.com. The campaign for Judas Redux was launched on Friday, March 26 and the project goal of $36,000 was met on Monday, April 1 (in under