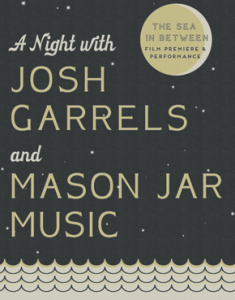 Critically-acclaimed Portland songwriter Josh Garrels will be performing with the New York City-based orchestral ensemble Mason Jar Music this Sunday, April 14, at the historic Athenaeum Theatre, 2936 N. Southport, Chicago, IL 60657. The event starts at 7:30pm with a screening of the feature film documentary called “The Sea In Between” which chronicles Josh Garrels’ and Mason Jar Music’s unique approach at preserving analog principles in a digital music age. A live concert performance with the 11-piece collaborative will follow the film.

The Palos Heights-based syndicated radio show “Under The Radar (UTR)” is co-sponsoring the event. Dave Trout, producer & host of UTR, shares: “This will be an unforgettable night for any music lover. Josh Garrels is an innovative artist who is the essence of the Portland indie music scene. His lyrical themes of faith, hope, redemption, and community will inspire even the most cynical soul.” Trout reported that Garrels has been UTR’s most requested artist for the last 2 years in a row. Event tickets are available at the Athenaeum Theatre Box Office(773-935-6875) and at their website: http:www.athenaeumtheatre.org.

About the artists:
Josh Garrels has been recording music for 11 years and currently lives in Portland with his wife and 2 children. The Carol Stream-based magazine Christianity Today named Garrels project Love and War and the Sea In Between as “The 2011 Album of the Year.” Mason Jar

Music (MJM) is a creative collective consisting of several Juilliard-trained musicians aiming to use analog principles alongside 21st century digital tools to create high quality audio and video. In 2012, MJM was named one of the Ten Most Innovative Music Companies by Fast Company Magazine. ###