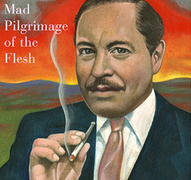 Steppenwolf Theatre Company Artistic Director Martha Lavey engages in conversation with John Lahr about his latest book, Tennessee Williams: Mad Pilgrimage of the Flesh in a special one-night-only event, Monday, October 13 at 7pm in the Downstairs Theatre. Lahr, who served as senior drama critic for The New Yorker for more than two decades, recently released his twentieth book, an authoritative, extraordinary biography on Tennessee Williams that invites intimate access into the mind of a playwright whose work reshaped the American theater. The conversation will include a Q&A, followed by a book signing in the lobby. Tickets are $10 and are available through Audience Services (1650 N Halsted), at 312-335-1650 or at steppenwolf.org.

The Chicago Tribune calls the book “a crucial contribution to the arguments that should always rage around a man who was one of the greatest American playwrights of his tempestuous century” and The Wall Street Journal hails it to be “by far the best book ever written about America’s greatest playwright.…[Lahr] brings us as close to Williams as we are ever likely to get.” The Associated Press describes Lahr’s book as, “a dazzling, deeply sympathetic and psychologically acute look at the life and work of a tortured genius.”

Tennessee Williams’s work ushered in – as Arthur Miller declared – ‘a revolution’ in American theater. Lahr’s deeply researched biography, Tennessee Williams: Mad Pilgrimage of the Flesh, sheds a light on Williams’s warring family, his guilt, his creative triumphs and failures, his sexuality and numerous affairs and his misreported death.

“John Lahr has penned a seminal account of Williams’s life and work. He does a masterful job of reading the plays and poetry of Williams within the context of the artist’s life and time. It is a gorgeous achievement,” says Steppenwolf Artistic Director Martha Lavey.

Among John Lahr’s 20 books are Notes On a Cowardly Lion: the Biography of Bert Lahr, Dame Edna Everage: Backstage with Barry Humphries (Roger Machell Prize) and Prick Up Your Ears: the Biography of Joe Orton (“As good as literary biography gets,” says The New York Times) which was made into a film. He has edited the diaries of Joe Orton and Kenneth Tynan. Since 1992, Lahr has been a regular contributor to The New Yorker where for 21 years he was the magazine’s senior drama critic. He has twice won the George Jean Nathan Award for Dramatic Criticism and twice been included in volumes of Best American Essays. His stage adaptations have been performed around the world; he is the first critic ever to win a Tony Award for co-authoring the 2002 Elaine Stritch at Liberty. For more information on Tennessee Williams: Mad Pilgrimage of the Flesh, visit tennesseewilliamsbiography.com.

Martha Lavey has been an ensemble member since 1993 and has appeared at Steppenwolf Theatre Company in more than 30 productions. Elsewhere in Chicago she has performed at Goodman Theatre, Victory Gardens Theater, Northlight Theatre and Remains Theatre and in New York at the Women’s Project and Productions. She has served on grants panels for the National Endowment for the Arts, Theatre Communications Group, Doris Duke Charitable Foundation, 3Arts, USA Artists and the City Arts panel of Chicago. Lavey holds a doctorate in Performance Studies from Northwestern University and is a member of the National Advisory Council for the School of Communication at Northwestern. She is a recipient of the Sarah Siddons Award and an Alumni Merit Award and honorary Doctorate of Arts from Northwestern University.

Steppenwolf Theatre Company is America’s longest standing, most distinguished ensemble theater, producing nearly 700 performances and events annually in its three Chicago theater spaces—the 515-seat Downstairs Theatre, the 299-seat Upstairs Theatre and the 80-seat Garage Theatre. Formed in 1976 by a collective of actors, Steppenwolf has grown into an ensemble of 44 actors, writers and directors. Artistic programming at Steppenwolf includes a five-play Subscription Season, a two-play Steppenwolf for Young Adults season and two repertory series: First Look Repertory of New Work, and Garage Rep. While firmly grounded in the Chicago community, nearly 40 original Steppenwolf productions have enjoyed success both nationally and internationally, including Off-Broadway, Broadway, London, Sydney, Dublin and Galway. Steppenwolf has the distinction of being the only theater to receive the National Medal of Arts, in addition to numerous other prestigious honors including an Illinois Arts Legend Award and 12 Tony Awards. Martha Lavey is the Artistic Director and David Hawkanson is the Executive Director. Nora Daley is Chair of Steppenwolf’s Board of Trustees. For additional information, visit steppenwolf.org, facebook.com/steppenwolftheatreand twitter.com/steppenwolfthtr.