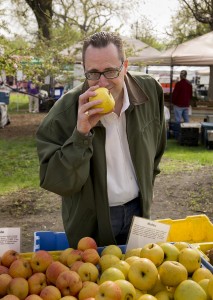 Mark Huntley, Regional Vice President and General Manager of Fairmont Chicago, Millennium Park, announces the appointment of John Cordeaux to Executive Chef of the hotel.  In his new position Chef Cordeaux will oversee the culinary operation at Fairmont Chicago.  From Aria Restaurant and Aria Bar & Sushi Club to the  Lobby Bar and In-Room Dining to the social catering and banquet culinary operation, Chef Cordeaux brings nearly 30 years of experience and a global perspective to the hotel’s food and beverage team.

“We are extremely fortunate to welcome such a culinary talent to Fairmont Chicago,” said Mark Huntley.  “Chef Cordeaux will be an excellent leader for our culinary team and bring a new creative vision to our operation.  We are delighted to have him bring his experience over three continents to our hotel and know he will make a tremendous contribution to the property and the community.”

“While my tenure in the Middle East was incredibly rewarding, I’m delighted to return to North America, and Fairmont Chicago, fresh from a more and $60 million renovation, is a spectacular location in one of the United States’ premier culinary cities,” explains Chef Cordeaux. “I’m fortunate to have a talented culinary team in place and look forward to working with them to enhance our operation.

“As we rework the menus, I’m looking forward to working with local and regional purveyors and leveraging those suppliers to create a farm to table approach,” continued Chef Cordeaux. “We will also be reinvigorating our rooftop herb garden and reopening our kosher kitchen so there are a variety of exciting culinary initiatives on the horizon for Fairmont Chicago.”

Chef Cordeaux began his career as an apprentice rising through the ranks to Chef de Partie at the Royal Victoria Hotel in Sheffield, England. In 1983 John joined The Turnberry Hotel and Golf Courses in Turnberry, Scotland and held the progressive roles of Commis 1, Chef de Partie and Second Sous Chef. In 1985 he joined The Lodge at Vail in Vail Colorado as a Junior Sous Chef.

Four years later, in 2009, Chef Cordeaux’s culinary passion drew him back into the Executive Chef role for the opening of the Fairmont Bab Al Bahr in Abu Dhabi. Following this successful opening, Chef Cordeaux joined another preopening team in the United Arab Emirates at Fairmont the Palm, The Palm Jumeirah in Dubai.

Throughout his career, Chef Cordeaux has received many awards and accolades, the most recent and notable includes receiving the prestigious Chef of the Year by The Hotelier Middle East in 2010.  Chef Cordeaux holds a Professional Certification in Food & Beverage management from Cornell University and a Certification in Strategic Management Culture and Change as well as Finance from the University of Guelph and a culinary apprenticeship from Sheffield College in the UK.

Fairmont Chicago, Millennium Park is one of the city’s premier locations for meetings, weddings and social events.  The hotel features more than 62,000 square feet of flexible meeting space, three dining outlets and 24-hour in-room dining for its 687 guestrooms.  For more information about Fairmont Chicago, please visitwww.fairmont.com/chicago or call (800) 441-1414.

Fairmont Hotels & Resorts is a celebrated collection of more than 65 luxury properties around the globe, including Shanghai’s Fairmont Peace Hotel, The Plaza in New York, and Makkah Clock Royal Tower in the Kingdom of Saudi Arabia. The luxury brand’s distinctive hotels offer a sense of heritage and sophistication, warm, engaging service and culturally rich experiences. Fairmont balances the company’s economic, environmental and social priorities and provides the framework for responsible hotel operations through the Sustainability Partnership program.  Fairmont is owned by FRHI Holdings Limited, a leading global hotel company with over 100 hotels under the Fairmont, Raffles, and Swissôtel brands. The company also manages Fairmont, Raffles and Swissôtel branded luxury private residences club, whole-ownership residences and serviced residences properties.  For more information or reservations, please call 1-800-441-1414 or visit fairmont.com.  Become a fan of Fairmont. Follow us on Facebook, Twitter, Instagram, Pinterest, and EveryonesAnOriginal.