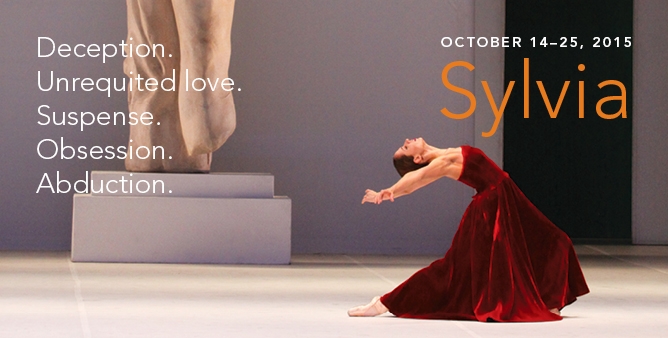 What a surprise! When I entered the magnificent Auditorium Theatre for the Joffrey Ballet’s performance of Leo Delibes’ Sylvia, I was grumpy and set to have a sad experience; wrong! I wanted to see Sir Frederick Ashton’s story ballet which was highly successful and all major productions (1997, 2004, 2005 and 2009) have been based upon his 1952 choreography. Sir Frederick, as a child, first saw Pavlova in extracts from the original 1902 Maryinsky’s production and was inspired to create this ballet anew for ballerina Margot Fonteyn in 1952. That production was to be debut in 1900 and Sergei Diaghilev was invited to supervise this first revival (the first was in Paris in 1876, played 6 performances and taken out of the Paris Opera’s repertoire.) Diaghilev wanted his dream team to mount this all-new production including Bakst and Benois. Tensions flared between Diaghilev and the management and Diaghilev was dismissed only to create his own company: Ballets Russes and the world of ballet would never be the same.

Sylvia is generally considered a classical ballet and features a mythical setting and an incredibly beautiful and moving late nineteenth-century score. Sylvia and Coppelia before it, are often touted as two of the first modern ballets because of their novel scores. There is such elegance, richness of melody, charm, rhythm and harmony. Fulbright scholar and conductor of the San Francisco Ballet, Music Advisor/Conductor of Honolulu Symphony and Associate Conductor of the Los Angeles Opera was in tight control of the Joffrey Orchestra. He found the extremes of attraction, romance, womanhood, unrequited love and the pronounced use of brass and wind instruments. Delibes score – instead of receding into the background, setting only the mood, sets the action.

I found the libretto to be some kind of an insider’s libretto and we poor “folk” were not planned to “get it.” Would you rewrite Hamlet? I don’t understand why modern day directors and choreographers think they can do better than the original creators. Sometimes it works and sometimes it doesn’t. This time the libretto clearly did not work. I expected more of John Neumeier, the choreographer. Diana and her huntresses looked like they were from the Isle of Lesbos. The Forest people (beautiful dancers in every way) looked like store mannequins with squared off feet. There are so many opportunities to tell stories with the music and except for the emotional displays of the three pas de deuxs the production felt more like a modern dance recital. I was jolted about when the dancers began to mime their emotions because it was from some romantic ballet – not a modern piece like I was seeing. Their mime was classically based and beautiful and told stories. The Stages did their work well. Sets and costumes were by Yannis Kokkos whose life and work in Paris were a large character in this ballet.

The casting made it so difficult to me to recognize Sylvia from Diana – they could have been Siamese twins – and the same for Eros/Thysis/Orion, so, I decided quickly when Aminta did not take the arrow for his god that I should just sick back and enjoy a performance of dance.

The Joffrey Ballet is in great shape and each dancer sparkled like diamonds, well trained in the classical art. The pas in Act I by Jeraldine Mendoza and Alberto Velazquez deserved the applause they received and they were outstanding. Again the two pas de deux in the second act were beautiful, controlled and melded adagio dance with the classic ballet.   The grand cortege of men in tails and women in Balenciaga gowns (and looking like run way models) was the highlight of my evening. Magnificent!

Click here to listen to the score by Léo Delibes on Spotify.