The Auditorium Theatre of Roosevelt University has something for everyone this spring when health and fitness guru Jillian Michaels tackles the Windy City on May 10 as part of her “Maximize Your Life” tour and The Tenors grace the Landmark Stage on May 12 for their “Lead With your Heart Tour.” Both of these one-night-only performances will inspire audiences in multiple ways bringing energy and excitement to the Auditorium Stage (50 E Congress Pkwy). Tickets for Jillian Michaels ($36 – $150) are on sale now and tickets for The Tenors ($49.50 – $59.50) go on sale March 25. All tickets are available online at AuditoriumTheatre.org, by calling (800) 982-ARTS (2787) or at the Auditorium Theatre Box Office (50 E Congress Pkwy).

“The Auditorium is always trying to expose our audiences to diverse and innovative programming,” said Auditorium Theatre Executive Director Brett Batterson. “With both Jillian Michaels and The Tenors, in addition to the spring line up previously announced, there really is something for everyone on the Landmark Stage.”

On May 10, fitness and wellness guru Jillian Michaels offers audiences the opportunity to take hold of their lives during her 35-city “Maximize Your Life” Tour. In this intimate and uniquely personal experience, Jillian shares her keys to health, success and happiness by harnessing ones potential and kick-starting goals in order to live an exceptional life. During her two-hour show, Michaels teaches how to redefine ones self-image, dramatically enhance confidence and self-worth and blast through all internal and external obstacles. She supplies her audience with an action plan that empowers one to conquer any challenge and achieve every goal while sharing key tools to help their fitness regime including the science of shedding pounds and the impact of hormones on weight loss and how to bring them back into balance. She demonstrates the how, what and why of workouts, sharing her most effective methods of burning fat and calories while teaching how to shift attitude, behavior, and mindset to maximize life.

“Your health is the platform that your entire life is built upon – from your physical health to your confidence and self-worth,” said Michaels. “I will give you the skill set, tools and insights to transform any aspect of your life immediately so you realize your true potential, and create the future you’ve dreamed of and deserve.” 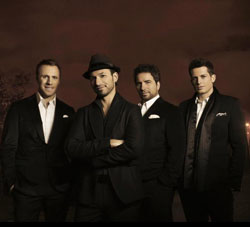 In a different kind of inspirational performance, The Tenors will delight audiences as they bring their new album, “Lead With Your Heart,” to life on the Auditorium’s Landmark Stage May 12. The critically acclaimed group will sing selections from their new album which debuted at #1 on the Billboard crossover charts and stretches the boundaries of classical crossover by combining timeless songs and modern hits. From cover features such as Bob Dylan’s “Forever Young” and Elton John’s “Sorry Seems To Be The Hardest Word” to the inspirational anthem “Amazing Grace” and one of the most recognizable and heroic Tenor arias, “Nessun Dorma”, the diverse track list features a mix of pop favorites and classical staples along with new compositions written and co-written by The Tenors.

All tickets are available online at AuditoriumTheatre.org, by calling (800) 982-2787 or in-person at the Auditorium Box Office (50 E Congress Pkwy).

Inspiring and motivating millions, Jillian Michaels has become the world’s leading health and wellness expert. She has appeared on 11 seasons of NBC’s “The Biggest Loser;” seen in more than 90 countries around the world and has made a unique connection with her audience as a motivator and role-model, one that stems from her personal journey of struggling with her own weight as a teenager. Jillian is a New York Times best-selling author, having sold more than 3.5 million books worldwide, including such titles as “Master Your Metabolism” and “Unlimited: How to Build an Exceptional Life.” Her newest book “Slim for Life: My Insider Secrets to Simple, Fast, and Lasting Weight Loss” has just been released. In addition, her DVDs are global bestsellers. Through extensive charity work, Michaels serves as an ambassador for Stand Up 2 Cancer and the NFL’s Play 60. She also works with military families through the USO, and is a champion of the Alliance for a Healthier Generation, a program dedicated to eradicating the childhood obesity epidemic in the United States. In addition, she is a member of the Clinton Global Initiative, working to protect the rights and welfare of children.

Since their inception only five years ago, The Tenors have had over 600 performances, thrilling audiences around the world with their powerful voices and memorable melodies.  Their blend of classical music, contemporary pop and undeniable charm has garnered them international success with music lovers of all ages. The Tenors have performed worldwide and shared the stage with legendary artists such as Andrea Bocelli, Celine Dion (on the Oprah show) Sting, and Paul McCartney, to name a few.  More recently, The Tenors were featured performers on two primetime international broadcasts: The Emmy Awards live from Los Angeles and The Queen’s Diamond Jubilee celebrations from Windsor Castle in the UK, where The Tenors performed for Her Majesty.

The Auditorium Theatre of Roosevelt University, located at 50 E Congress Pkwy, is an independent, not-for-profit organization committed to presenting the finest in international, cultural and community programming to Chicago, and to the continued restoration and preservation of the National Historic Landmark Auditorium Theatre. The Auditorium Theatre is generously supported by the Illinois Arts Council, CityArts, and the Palmer House Hilton.  For more information about programming, volunteer and donor opportunities or theater tours, call (312) 341-2310 or visit AuditoriumTheatre.org.