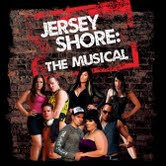 4 Days Late is pleased to announce the release of the Chicago Cast Recording ofJersey Shore: The Musical. The album will be released for digital download on all major music stores, including Amazon, iTunes and Spotify, beginning October 23, 2012.  The cast of Jersey Shore: The Musical recorded the album in Chicago under the direction of music director and chief engineer Matt Griffo.

Jersey Shore: The Musical opened in Chicago on July 22, 2011 at Studio BE (3110 North Sheffield Avenue).  After opening to widespread critical acclaim, the show transferred to the Greenhouse Theater Center (2257 North Lincoln Avenue).  Seen by over 5,600 people, the show played for 9 months and 94 performances.

Jersey Shore: The Musical, produced by 4 Days Late Productions in association with Studio BE, re-imagines the pop culture phenomenon through an uproarious, irreverent original score and wicked hilarious tone. Satirically, Jersey Shore: The Musical asks the question, “What fuels the reality television phenomenon?” Love it or hate it, we all play a part and can’t stop watching.

The extended production was directed by Jason Lord and choreographed by John Gilmour; costume design by Emily Friedrick, make up design by Maggie Mietus and lighting design by Eric Branson.

4 Days Late Productions was founded in 2007 and features a collaborative team of writers who have once again birthed a gut busting original script. Their most recent success, Jersey Shore The Musical, ran for 9 months to sold-out audiences all over Chicagoland. Other productions include: Time to Stop Worrying, America: For Dummies, ObamaNation American’s In Peril, iAlone. 4 Days Late Productions has performed in Chicago Sketchfest for four years running and recently performed in the Indiana Fringe Comedy Festival.

For more information about 4 Days Late Productions go to www.Facebook.com/4DaysLateComedy